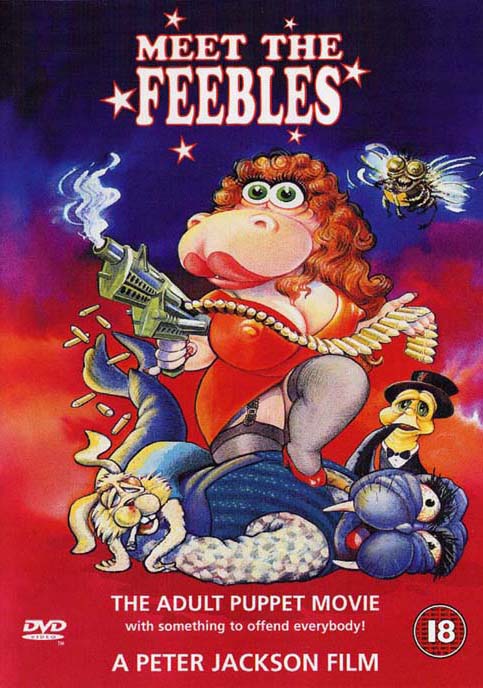 You wouldn’t think Peter Jackson and The Muppets would have any sort of relation, would you? After all, the Muppets were created by Jim Henson about as far back as 1955. Peter Jackson didn’t even START in film until 1976. Well, believe it or not, they do. A minute relation, but a relation nonetheless. That relation is the raunchy, gory, foul-mouthed looks-like-the-Muppets-but-DEFINITELY-isn’t film by Peter Jackson known as Meet The Feebles.

Released in 1989, Meet The Feebles is what you get when you picture The Muppets on Opposite Day. The movie is about a theatre troupe of puppet animals known as (of course) The Feebles preparing for a big television debut that they hope will get them a syndicated series on TV. However, a TON of different things occur that might get in the way of that. The main star (Heidi Hippo) discovers her lover, the manager (Bletch the Walrus), may be cheating on her, one of the actors (Harry The Rabbit) contracts a potentially lethal disease (“The Big One”) and a tabloid reporter (a fly) tries to expose it, another actor (Sydney the Elephant) is in a paternity suit against a girl who claims her son is his son, the manager is running a porno ring in the theatre basement and a drug ring on the side, I could go on but I don’t want to spoil all of it.

No denying it, Meet The Feebles is sick stuff. Sick, sick, SICK stuff, and it came from the guy who made the Lord Of The Rings Trilogy. It’s got puppets having sex, being killed in rather graphic ways, we even see a frog inject crack into his arm on a toilet. And yet, in all its sickness, in all the gore, violence, drugs, depravity, it is still entertaining. VERY entertaining. There’s something about watching these puppets trying to put together a show, combat their vices, and reveal how corrupt some of them can be that just makes you want to keep watching. It’s definitely got that trademark sick sense of humour Peter Jackson is known for at work in it.

I’d say this movie serves as a message of how much we loved The Muppets in the 80s. We loved them so much, Peter Jackson decided he should spoof them. And boy did he do it. Meet The Feebles is not for everybody, and DEFINITELY not for the age group that WATCHES the Muppets. However, if you don’t mind puppets killing each other, having sex, or injecting crack into their systems (heck, if you even WANNA see that stuff), and if you’re a fan of Peter Jackson, I recommend this highly. It may be a bit hard to find in stores, but hey, that’s what YouTube’s for.