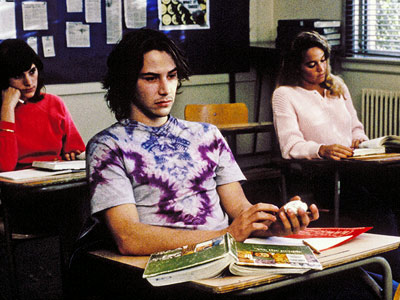 River’s Edge captures the world of mid-eighties kids as well as any John Hughes film, but the world these kids inhabit is entirely different. It’s the flipside, or better still, the underbelly of the John Hughes’ 80s. A group of high-school friends learns that one of their own has murdered his girlfriend. The murderer, Samson (known as John, played by Daniel Roebuck) shows them Jamie’s nude body, which he has left at the river’s edge. You’d think their world would be turned upside down by this, right? But it’s not. And that’s what’s so powerful about the film.

Matt (Keanu Reeves) and Clarissa (Ione Skye Leitch), are upset that their friend is dead. They’re bothered by the fact that she’s naked and alone. But they’re also concerned about John. Jaime can’t be helped now, so shouldn’t they try and protect John?

Matt and Clarissa’s ponderings are not urgent by any means. More cerebral, really, like they are observing all this from a distance instead of living it. The two also have a friendship with Layne, played by Crispin Glover. Layne, already pretty odd, is coming completely unhinged by this situation. He is almost out of his head—as only Crispin Glover can be—trying to hold the group together and keep John out of trouble.

Added to this is John’s friendship with the only truly present adult in the film. Parents are in and out and mostly yell, leaving Feck the most visible adult in their lives. Feck is a paranoid loner whose only companion is his blow-up sex doll. (And this being the 80s, I hardly need to tell you that Feck is played, to creepy perfection, by Dennis Hopper.) 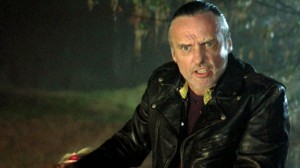 Matt and Clarissa aren’t bad kids. They aren’t even confused kids, really. They are numb. They’re suburbanites without much to do or look forward to. Nothing in their lives is particularly real or urgent, even a friend who’s dead and another friend who’s a murderer. Ione Skye Leitch’s Clarissa, with her long hair, luminous skin, and oversized plaid shirts, is the perfect poster-child for the 80s angst that Nirvana nailed. As she walks through the park at dawn after passionless sex with Matt, she fairly reeks of teen spirit.

Will Jamie’s body be found by anyone who cares enough to move it from the river’s edge to the morgue? Will John be turned in? And if so, which of the kids will do it?

As all this plays out, keep your eye on Matt’s little brother, Tim (Joshua John Miller). If you find the older characters’ attitudes chilling, Tim’s will make you downright cold. He’s fully aware of what’s going on with his older brother’s group of friends, and his reaction is terrifying.

Following around on his bike since he’s too young to drive, Tim is the angry generation that’s set to come of age after Matt and Clarissa’s. He narrows his eyes in fury and says things like, “Get your nunchucks and your dad’s car. I know where we can get a gun” while trying to involve himself with John, Feck, and Layne—a dangerous trio if ever there was one. Tim is the perfect post-script on this film—a message that if you think the high-school crowd’s disaffection is just an anomaly, the preteens around the corner will prove that they’re even worse. What a way to enter the 90s.

PS — River’s Edge is based on an actual event. Just something more to think about. 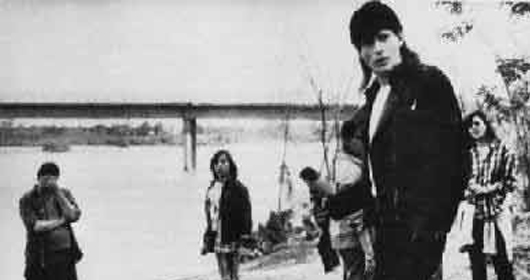