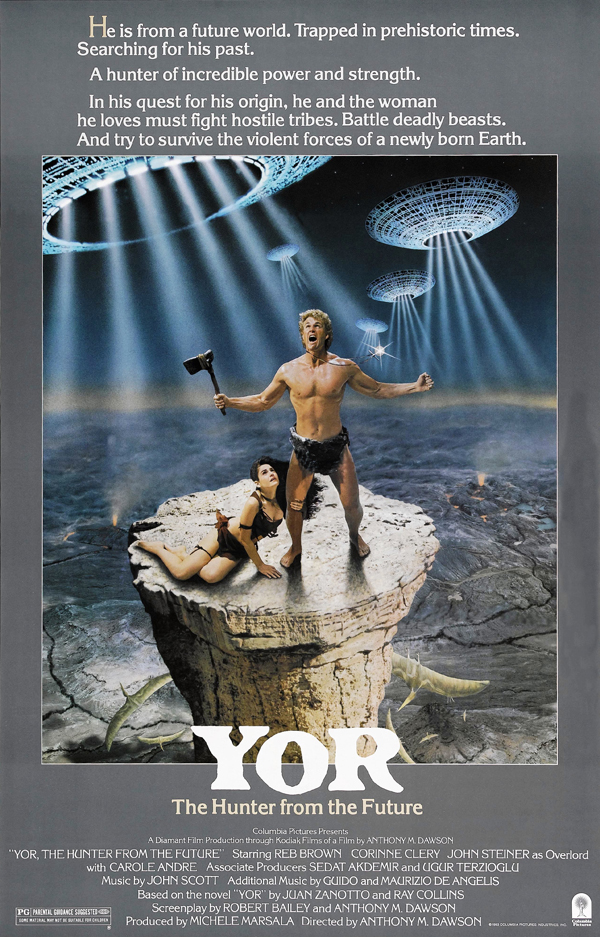 Arnold Schwartzeneggar, Sylvester Stallone, Harrison Ford—these are the names we think of when we think 80s action stars. However, there is one name that, despite being known for starring in some pretty gag-me-with-a-spoon-worthy schlock movies, is still worthy of mentioning for at least a few awful yet awesome acting jobs as the main star in some so-bad-it’s-good movies. That name is Reb Brown. And, one of the movies he starred in is a European science-fiction work of awful art from 1983 called Yor, The Hunter From The Future.

Yor tells the story of a caveman known as (you guessed it) Yor, and opens with him jogging faround a mountainside (I hear he jogs like a girl, but I fail to see what’s so girly about his jogging). When he rescues a woman named Kala (Corinne Clery) from a rampaging Triceratops (and drinks its blood “to gain its strength”), he is welcomed to her village, where he discovers from the girls old fat guardian named Pak (Luciano Pigozzi) that the mysterious amulet he wears around his neck is worn by a mysterious woman in the desert. After rescuing Kala after she and her people are kidnapped by a race of purple caveman (yeah, you read right, PURPLE CAVEMEN), Yor, Kala, and Pak accompany Yor on a journey of self-discovery, during which they come across rival tribes, more dinosaurs, and . . . robots that look like Darth Vader?

Yeah, a lot of things seem wrong about this movie. Yor’s running in the beginning is very silly, the special effects for some of the dinosaurs are VERY cheap (so are some of the sets, particularly the ones at the end), and the acting could be brought into question (I didn’t question it, but some people might). However, despite all of that, the movie is still a good movie to watch. The action scenes (and the theme song, which you can listen to below) are awesome, it’s got LOADS of memorable lines (”Damn talking box!” quote from Yor), and it’s pretty cool to see a caveman fire lasers at robots looking like Darth Vader. 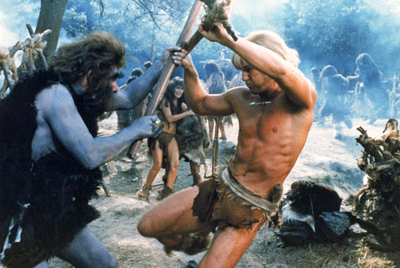 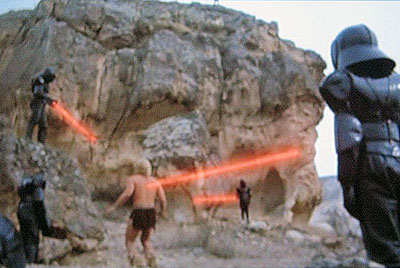 Now, Yor isn’t the best movie (heck, there are plenty of WAY better-made movies than Yor), but that doesn’t mean you shouldn’t see it. If you watch it, I guarantee that from beginning to end, you will like this movie. Sadly, it was only released in Germany on Region 2 DVD and the VHS has been out of print for years. However, don’t despair. The VHS of Yor is still available on Ebay for reasonable prices. And hey, if you can’t get a copy, there’s always YouTube.