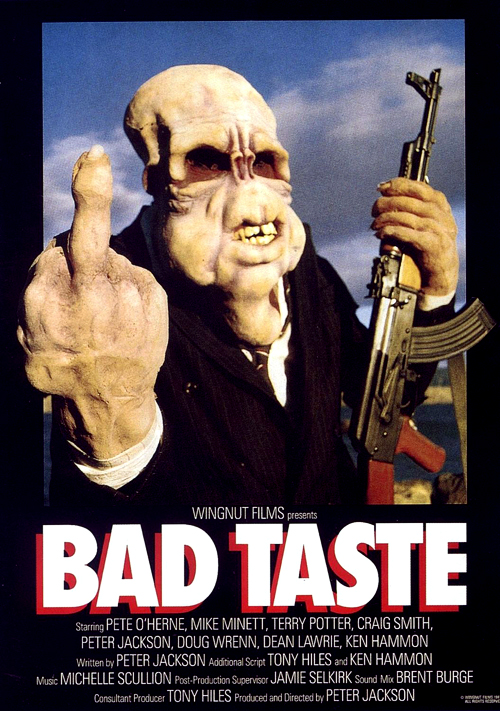 When you think of Peter Jackson, which of his movies immediately comes to mind? Of course, it’s the Lord of the Rings trilogy, and the King Kong remake. However, while they may be his most famous works, and what made him the big media name he is today, they weren’t his first ever films. What you may not know is that Peter Jackson got his start in films in 1976, and made his cinematic debut in 1987 with a low-budget comedy sci-fi splatter flick known as Bad Taste.

Bad Taste follows the four-person Astro Investigation and Defense Service (AIDS) team, made up of Frank (Mike Minett), Ozzy (Terry Potter), Barry (Pete O’Herne), and Derek (Peter Jackson), as they’re called in to investigate the disappearance of the entire population of a village called Kaihoro in New Zealand. When they reach the town, the team soon discovers it’s been overrun by aliens who have assumed human form. At the same time, a man named Giles (Craig Smith) goes to Kaihoro, and soon finds himself at the aliens’ mercy. If that weren’t enough, while battling the aliens, Derek gets pushed off a cliff, miraculously survives (thanks to falling on a nest of seagulls), and is driven mad when his brains start leaking out of a hole in the back of his head. Eventually, Frank, Barry, and Ozzy find the aliens’ home base, and come to discover what the aliens have planned for humanity. 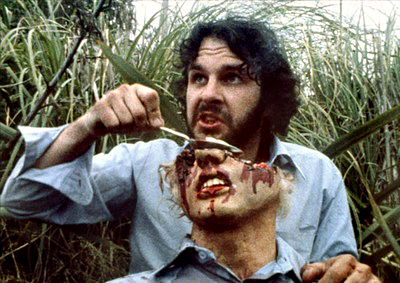 Yep, this is yet another example of what goes on inside of Peter Jackson’s head. Despite the fact that this is indeed a low-budget film (a grand total of $255,000), there’s quite a bit of violence, gore, and even plenty of grey matter. However, don’t let the low-budget cheap look of the movie or goriness deter you from watching it. If you stick with it, you’ll be pulled into the movie, and want to watch it to the end to see how it plays out. Plus, in spite of the tight budget of the movie, you can clearly see Jackson wasn’t held back by this. He used every bit of his imagination to make this movie work, and it certainly shows.

This is a movie that certainly shows what can be done with even the most miniscule of budgets if the right director is handling the megaphone. Bad Taste may not be the most well-known of Peter Jackson’s movies, but it’s certainly a movie worth watching, especially for Peter Jackson fans. It might be a bit hard to find in stores outside of New Zealand (I’ve never seen it for rent anyway), but luckily Amazon and Ebay have it for you to buy. And hey, if you still can’t get a hold of it, it’s on YouTube.