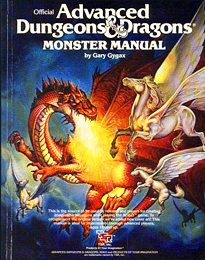 It’s 1984. A little girl eavesdrops outside her older brother’s bedroom. Inside, he and three of his teenage friends are clustered around a card table littered with exotic dice, tiny metal figurines and complicated hand-drawn papers. She listens. They talk about “hit points” and “melee rounds” and the all-powerful “Dungeon Master.” They visit the “elemental plane.” They encounter a “water weird” and a “gray slime.” She’s fascinated. The door to his room opens slowly and – She’s busted. Hey, let’s get Julie to play! We need a thief! Come on, we’ll teach you. And I was introduced to the dreamy, shadowy, utterly fabulous world of Dungeons and Dragons. For years, my older brotherhad been a huge fan of J.R.R. Tolkien, whose characters and plots doubtlessly influenced D&D. Though I’d seen the cartoon version of The Hobbit that was released in 1977, the Lord of the Rings Trilogy was a bit too wordy for me to read at the age of twelve. 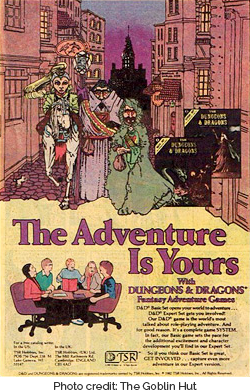 However, I’d pored over the Monster Manual countless times. I even knew the creator’s name: Gary Gygax. It was spoken with reverence in my home, and his improbable last name added to the mystery of the whole thing. Who is this Gary Gygax person? How did he imagine all these monsters? Is he EVEN REAL?? The creatures that lurked within the pages of the Monster Manual (and the books that followed, like the way cool Fiend Folio) were the epitome of fantastic awesomeness: dozens of dragons, hordes of devils, horrible undead creatures, bizarre animal composites, sexy (but evil!) demon temptresses, weird creatures from worlds of geometric shapes, and even fiercely tough angels. There were chaotic evil creatures, lawful good beings, and scads of neutral but fierce critters. Characters traveled to different planes of existence and, with the roll of a dice, fought battles and sought treasure. It wasn’t just a world of its own, it was an entire universe of well-conceived fantasy role-playing. To be fair, it was both Gary Gygax and Dave Arneson who designed the original Dungeons and Dragons in 1974, although Gary wins in the cool-name department. The game was published by TSR (Tactical Studies Rules, Inc.) in 1974. The game style was new in that each player became a specific character which then interacted with other characters on adventures designed by the Dungeon Master, or referee/storyteller type person. I always thought the DM got the short end of the stick because he didn’t get to participate in the events of the game, but I suppose there’s a certain element of fun for the DM as well. We had a Mattel Intellivision which was touted as having VASTLY better graphics than the Atari. For example, on Intellivision games, the characters had, like, nine pixels instead of Atari’s measly four, and the tennis swing had a nice WhooshPop to it. WAY realistic. And it didn’t have an old-school joystick; the Intellivision had that shiny gold disc controller, which inevitably got grubby, peely, and worn down. Anyway, my favorite Intellivision game was without a doubt Advanced Dungeons and Dragons. In Tolkien fashion, you traveled around a map and collected stuff and ended up confronting a fire-breathing dragon. Even then, I appreciated the slow pace of the action: not too scary, fairly predictable, and deeply satisfying. Totally more fun than the stupid tennis game. The accoutrements of D&D (and, later, AD&D) were the best part, at least in my peripheral player status. There were the multi-sided die, kept in a drawstring velvet pouch, of course. There were the hand drawn maps and notes of the ever-laboring Dungeon Master. 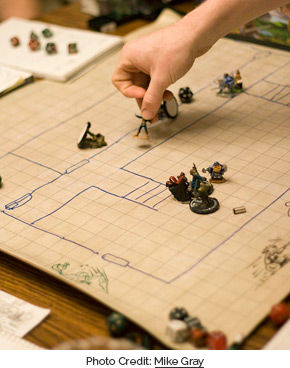 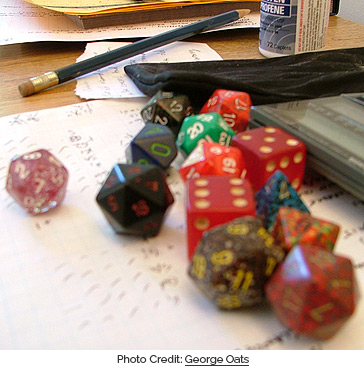 There were the strangely detailed figurines, so wildly different and more mature than my Strawberry Shortcakes. And all the merchandising that came along with it, including these Choose Your Own Adventure Books that I loved, loved, loved. 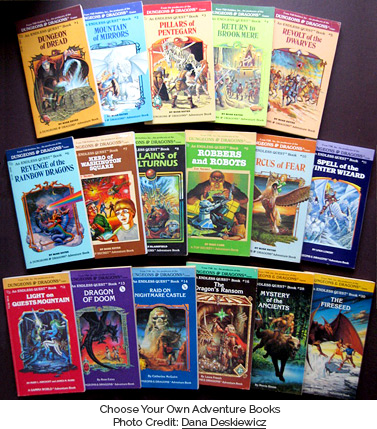 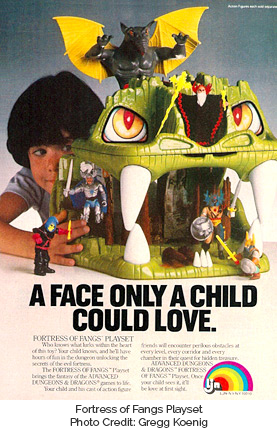 I have an incredibly soft spot in my heart for D&D and AD&D, and all those magnificent creatures to whom they introduced me. They taught me to appreciate great fantasy writers and artists, and I still happily curl up with an old, beloved fantasy book or set of short stories from time to time. Fantasy and its close cousin, Sci-Fi, are the great loves of my literary and film lives. (PSI: Avoid the 2000 movie “Dungeons and Dragons” at all costs.) I’ve caught glimpses of Gary Gygax’s step-great-great grandchildren in my sons’ Pokemon and Digemon over the years, but they’re nowhere near as cool as the real deal. Manga trading card games and modern video games just scratch the surface of fantasy. In D&D and AD&D, the players used the books and game rules to create complex scenarios that existed entirely in their own shared imaginations. TSR’s Dungeons and Dragons universe was a complicated, truly imaginative, interactive lightning storm of awesomeness. Besides, the Beholder would totally kick Pikachu’s mousy yellow butt. As modern and fast-paced as we thought the eighties were when we were living them, we see now that it really was a gentler, more innocent world. Was the country really all bent out of shape over kids playing a game? A game that required huge amounts of creativity, memorization, mental calculations, and human interaction? As awesome as Dungeons and Dragons was, it did have its share of controversy. The tragedies that were pinned on D & D were heartbreaking, but, in retrospect, it seems clear to me that it’s just not fair to blame the immensely popular game for the actions of some very troubled kids. Side note: I’m now a mom of two teenage boys. I have to say that I’d be PSYCHED if they wanted to invite their best friends over to sit around a card table and “journey into a land of fantasy through complicated mazes, where you use your wits to kill your enemies before they kill you.” I mean, honestly, going after Owlbears and Gas Spores IN YOUR MIND vs. Grand Theft Auto?