So, so good, and gone so, so fast. Isn’t that just the way of things? But, despite its lightening fast flavor expiration, Fruit Stripe gum is worth every precious chew. Like no other, the 5 juicy flavors (the originals) are so much more than their names would indicate (cherry, lemon, orange, mixed fruit, and lime). Maybe it’s the painted-on stripes that add the extra fabulousness. Whatever the source of all that flavor, the result is a happy little party in your mouth.

Created in the early 60s, this chewing gum has staying power in Fruit Stripe Gum Wrappersthe marketplace, even if not in your mouth. Or, maybe we’re thinking about this all wrong. Maybe that’s the genius of the product. If the flavor (so yummy and addictive) only lasts a matter of seconds, we are more likely to pop a second or third, or tenth piece. They get to sell three times as much gum. Genius. 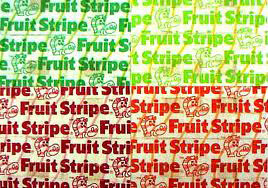 Fruit Stripe gum is a treat for your senses; it goes beyond just taste. A fresh pack of Fruit Stripe is best consumed first through its intoxicating smell, with the taste as your second flavor punch. Simply open up the end of the pack, bring the open pack to your nose and breathe deeply. Hmmm. As if the taste and smell were not enough Yipes, Fruit Stripe Gum’s spokes-zebra(and, they are), each pack come with tattoos! I’ve never been able to get one to work, but the idea is nice. 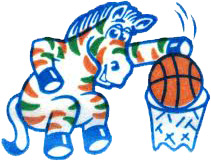 I remain a little perplexed at the name of the happy spokes-zebra, Yipes. Is it a combination of “yay” and “stripes?” Whatever it is, Yipes has been the official mascot of Fruit Stripe since 1988 and adds his handsome mug to each pack.

Fruit Stripe and its legendary flavor even made an appearance in the Beastie Boys’ “B-Boy Bouillabaisse” off 1989’s Paul’s Boutique (best Beastie Boys album), “Girl, you should be with me, you should drop that bum / ‘Cause I got more flavor than fruit stripe gum.” What girl could resist such logic?

So, the next time you’re buying gas, and reach for a pack of gum at the checkout, make it Fruit Stripe. You will not be disappointed. You might want to go ahead and buy a second pack. Given the rapidity with which the flavor dissipates, you’ll need to reload regularly, and your itch may not be fully scratched by a single pack. It’s best to be prepared.