In Search of Clear Skin

Home » In Search of Clear Skin

It’s the mid-1980’s, before Proactiv, before even Retin-A. However, even way back when Reagonomics was in full swing, women wore makeup (often LOTS of it) and teenagers got acne. We needed products to cleanse our pores, dry our pimples, and make us look all fresh and dewy and clean, at least until we spackled on some more Maybelline.

I asked my husband this morning what products he used to wash his face in the eighties. “Uh, soap…?” he responded, bemused. “Whatever was in the shower?”

Pfffft. “Whatever was in the shower” wasn’t going to cut it for an eighties girl. We needed SERIOUS skin care, and it took some shopping around and experimenting to find the skin care plan that worked for us.

pHisoderm didn’t thrill me, regardless of its pH balanced claims. This commercial shows it getting all foamy, but that is not what I recall. It was thin and runny, like watered down Elmer’s glue, and didn’t smell good. My face felt uncomfortably tight after washing with it. Thumbs down.

Neutrogena’s clear orange soap bar left my skin feeling clean but not stripped of all moisture, so that was good. Using a bar, however, was less satisfying than a nice sudsy liquid or cream, and the bar tended to crack and look grubby after a couple of weeks. Neutrogena soap didn’t smell like much of anything, but at least that was better than pHisoderm’s weirdly medical odor. Neutrogena eventually came out with a pump, retaining the clear orange look, and I approved heartily. This ad for the original bar soap is from 1983: 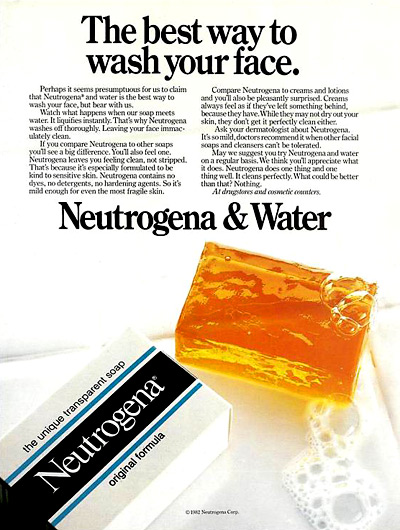 Both pHisoderm and the Neutrogena bar partnered well with the Buf Puf, demonstrated by Sharon Stone in this commercial from 1987. Buf Pufs were a thicker, gentler version of the pot-scrubby side of kitchen sponges. As exfoliation tools, they worked great until they got all compacted and grody, which happened pretty quickly as I recall. 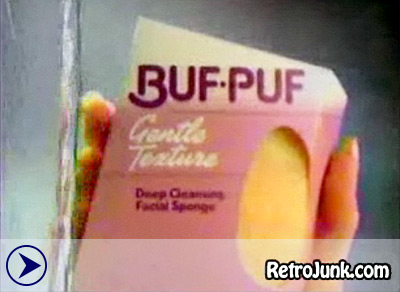 Noxema was a beloved product, largely because of the smell. Mmm, Noxema. It did seem awfully mild, not really big enough guns for my skin once for-real acne sunk its teeth into my T-zone. But it sure did smell and feel good to use, and was oh-so-soothing on sunburns. I still remember the simple visceral joy of digging my fingers into a pristine tub of the thick white stuff.

Here’s the 1985 version of Noxema, in a fancy aerobics-inspired pump:

And a quick little commercial from 1986, which amuses me only because the glowing spokesmodel looks like the baby in the sun from Teletubbies:

Carol Alt is so fresh and pretty in this 1985 commercial for Noxema antiseptic skin cleanser, a corollary to the skin cream:

Unlike the mildly refreshing Noxema astringent that Carol sold us, Bonne Bell Ten-O-Six lotion was turpentine in a bottle. Based on peer reviews, I insisted that my mom get me a bottle of the stuff, and it was a completely negative experience. My eyes stung, my skin burned, my pores screamed for mercy. I ended up saturating a cotton ball with water first to dilute the Ten-0-Six before applying it to my face, but that got old fast. The Ten-O-Six got shoved to the back of the bathroom cabinet. This fresh-faced ad is from 1983: 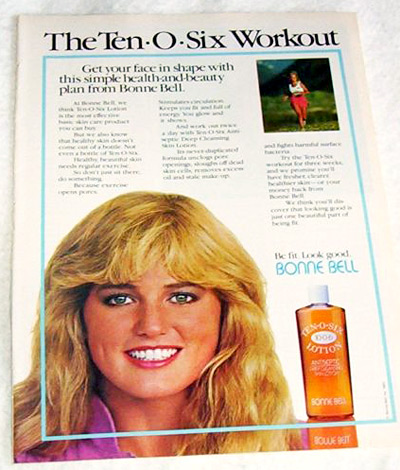 After the Ten-O-Six debacle, I went right back to my old standby astringent: Sea Breeze. Like Noxema, that scent is both nostalgic and delightful. Sea Breeze was just strong enough; it felt like it was indeed doing some deep cleaning, without actually doing nerve damage to my skin. Sing along with me: “Beautiful skin can be a breeze, with Sea Breeze . . .”

When we got those really nasty pimples, we turned to Benzoyl Peroxide products, like Oxy. This commercial just makes me wince to watch; could this dude be any more irritating?

I don’t remember Topex personally, and it appears the product no longer exists. I’m suspecting that failure was inevitable for a cream that sounded like the love child of Tampax and Toppik. NOT something a lady would want to put on her face:

Clearasil was my acne medicine of choice. I have no idea why I thought it was superior to Oxy, although I suspect that Clearasil’s slogan “Minimize the Wait!” appealed to fifteen-year old me more than Oxy’s violent-sounding “OXYCUTE ‘EM!”

Exfoliation was key, of course, in pore cleansing and pimple prevention, and my mom got tired of buying me Buf Pufs. St. Ives Apricot Scrub was both awesome and inexpensive. The only drawback was the huge jars it was packaged in. Nowadays, it’s in tubes, but back then it came in big ol’ wide-mouth plastic tubs. But, whatever. I loved rubbing that mildly scented gritty goo into my skin.

Aapri also had a great apricot facial scrub, sold here by a lady with a brisk British accent, which made EVERYTHING sound fancier:

When I was in high school, I worked in a department store beauty salon. It was an excellent job in so many ways, only ONE of which was that I got to spend my breaks perusing the clearance racks and using my employee discount to buy makeup. KA-CHING! Thus my introduction to Clinique products. And yes, I’m still a sucker for Clinique Bonus Time. Clinique was all “scientific” and “personalized”; it was (and is!) sold by “professionals” in white lab coats, so you know it’s the real deal. The extra-large bar soap was nothing to do flips over, BUT it came with that awesome pale green slide-to-open soap box. This ad is from 1981: 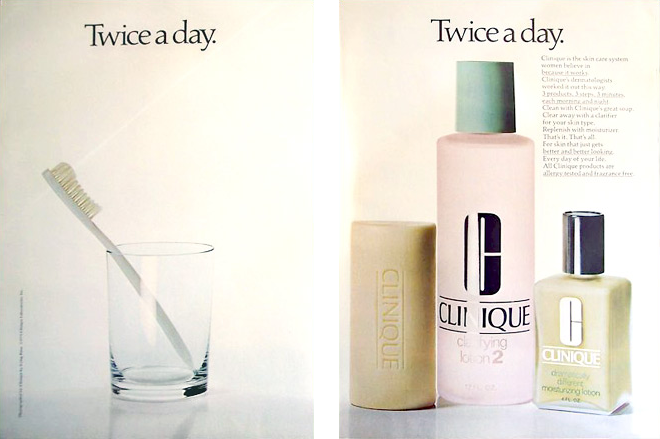 Last but not least, we required weekly maintenance in addition to our morning and evening rituals. In a way-less-gross precursor to those vile Got Milk? ads, Mudd masks featured celebrities hiding behind their ugly (but beautifying!) mud masks. I remember being both repulsed and fascinated by the little speckles of oil that rose to the surface of the clay mask as it dried on my face.

So, can you guess the identity of the masked woman in this 1986 advertisement? 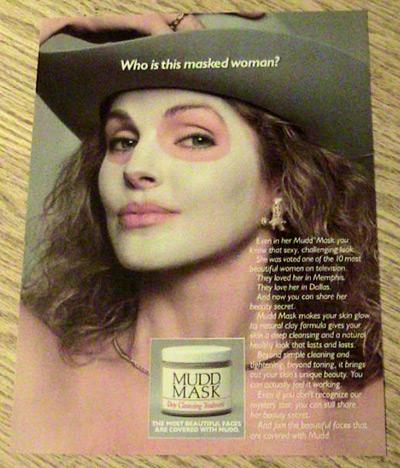 I won’t spoil it for you, but her name rhymes with Chinchilla Leslie and she was once married to a king. And yes, she was totally beautiful, with or without the Mudd.