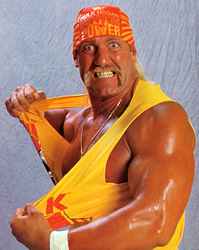 In 1982, when I was 13 years old, I saw Rocky III. The action in the film, a lesser entry in the Rocky franchise, is built around the fights that take place between Rocky Balboa (Sylvester Stallone) and Clubber Lang (Mr. T). But in an early scene, Rocky has a charity exhibition “fight” against a professional wrestler named Thunderlips.

So, Thunderlips (because repeating it just never gets old) was played by a tan, blonde oak tree named Hulk Hogan – a little-known professional wrestler in real life. At this point in history, professional wrestling had grown tired. It was born (as we know it) in the late 1800s and it catapulted into the mainstream thanks to 1950s television broadcasts, but by the early 1980s, the personalities of the sport . . . well . . . were losing their personality.

Fast forward less than two years to an event that was the professional wrestling equivalent of the first time someone took the acoustic guitar and decided to plug it in.

Hulk Hogan burst onto the newly-revamped World Wrestling Federation stage in a slash of tan and blonde and moustache, with his trademark red and yellow uniform and headband. He didn’t just add life to the sport; he GAVE it life. And as for his size, his chest was like the grill of a Mack truck, his legs like torpedoes, and his arms like the “24-inch pythons” he himself proclaimed them to be. Was he the biggest wrestler in the game? No, that title went to Andre the Giant; but where Andre was soft and oafish, Hulk Hogan was solid and nimble. And when it came to charisma, Hogan’s well was bottomless. In addition to being part-bodybuilder and part-acrobat, he was part-leading man and part-carnival barker, with a shtick so perfectly delivered you not only believed it, you believed that HE believed it too. 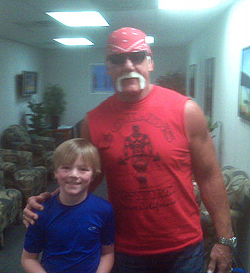 An LT80s firend ran into Hulk Hogan in March 2011 at the Panama City airport.

Thus HULKAMANIA was born. Every kid who watched professional wrestling in the ‘80s could walk into a room and do the following: nod heartily and cup his ear in the direction of all four walls (the way Hulk did towards all four sides of the ring as a way to get the crowd cheering louder); strike poses the way Hulk struck poses after a winning; call everybody “brother” in that not-quite-gravelly voice the way Hulk did in pre- and post-match interviews; and espouse (and live by) Hulk’s Three “Demandments”: Train, Pray, and Take Vitamins.

Eventually, many of those Hulkamaniacs grew up and moved on to other things . . . but we’ll always remember.

Michael Nazarewycz is a US-based Writer for UK-based Filmoria.com. He also blogs at ScribeHard On Film. He can be reached via Twitter @ScribeHard.