How a Generation Learned Their Multiplication Tables 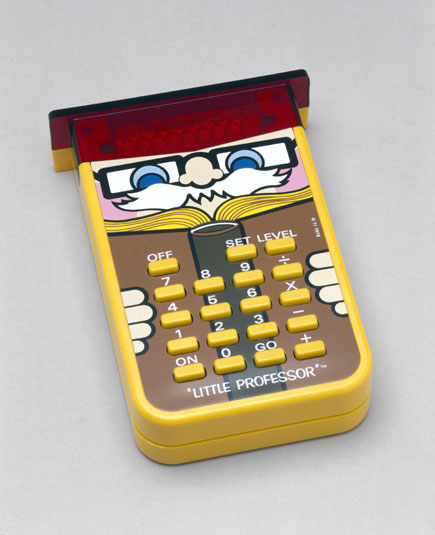 Those of us who came of age in the 80s were little kids in the 70s; and one of the coolest toys of the late 70s was the Little Professor handheld reverse calculator. It was the first electronic educational toy developed by Texas Instruments (which later went on to develop the immensely popular Speak & Spell series). Little Professor was first introduced in 1976, and kids were so excited about this innovative math toy that the company was unable to keep up with the Christmas demand that year. The next year, the company sold over one million units. They released a slightly updated 2.0 version in 1978, and an additional model in 1980.

The amazing thing is that TI managed to make math addictive and fun. There was no storyline, action, or characters (unless you count the handsome and friendly owl); heck, the thing didn’t even have sound. But, it was so new and so cool that we loved it all the same. It even had a handy wrist strap so that you could math with you on the go

For those that don’t remember this gem, it served as a sort of electronic flash card game. The user chose the operation (addition, subtraction, multiplication, division) and one of four difficulty levels. You then had to enter answers to the questions that appeared on the red digital readout. You got a score for each set of 10 questions answered. I remember staying up late at night, hiding under the covers to play with my Little Professor. In thinking back on this, I have to wonder, why did I have to sneak the extra time to play with this game? It was teaching me math, after all.

If all this talk of Little Professor has you longing for your own, you can still buy them on ebay.com, but the price is no longer the $20.00 they commanded in 1978. The going price for a working Little Professor ranges from $35.00 to $99.00.

With the electronic offerings available to today’s kids, this fairly rudimentary toy wouldn’t likely appeal to our own kids. But in the late 70s and early 80s, this thing was Sa-weet. Sadly, my Little Professor has long since gone the way of most of my other toys from the 80s. Even so, I can still remember the hours of covert “playing”—is it really a game if what you are doing is essentially the equivalent of math homework? – and the warm glow of my owl friend’s red numbers lighting up my undercover-play-cave. I wonder if my son’s iTouch provides the same experience. 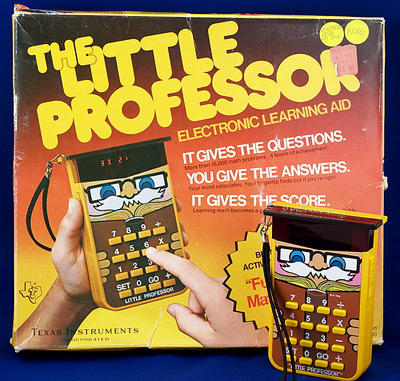