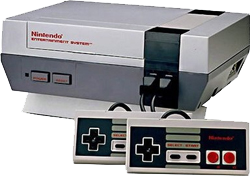 Many art movements have come and gone through the years, most of which have been intentional, reflecting messages of the times. However, one movement stands out, for me, above all others. This movement was, until recently, not a movement at all. Simply, it was a representation of the limitations of technology at the time. I am referring, of course, to 8-Bit.

8-Bit arguably became famous with the introduction of third generation games consoles of the early 80s, like the NES. Technology at the time dictated the level of graphics that were possible in video games, and this resulted in blocky, simplistic images, of limited colours, which dawned 8-Bit revolution.

I was introduced to the genius of 8-Bit gaming in the late 80s, on a crisp Christmas morning. My life was to change forever, when I excitedly opened my shiny new NES. I hooked her up to my TV, and there came the birth of an obsession that has done nothing but gather momentum since. Sitting in my kitchen, with a blocky Mario, jumping across my screen, collecting coins and squashing walking mushrooms, I was in love. The NES promised the world, and boy, did it deliver. The NES produced games with the perfect balance of simplicity and depth. Super Mario Bros became the biggest selling game and remained so until 2009. 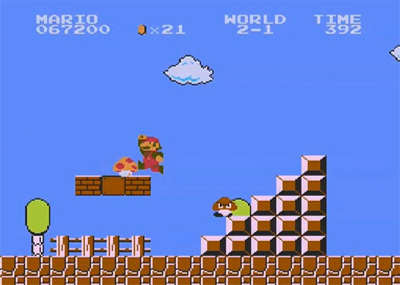 8-Bit graphics were simple and limited. They were colourful, blocky and sometimes crude, but that did nothing but add to their charm.

What 8-Bit achieved, purely by accident, was to spark a retrospective obsession with some of the most iconic images in modern entertainment. Today, people have realised that the 80s was an awesome decade in entertainment and fashion. There is something so wonderfully garish and charming about everything the 80s represented, that people cannot get enough of it.

80s imagery, and 8-bit in particular, have become iconic, chic and dare I say, cool. We see it on t-shirts, in art and in music. In short, 8-Bit is back.

Why do people love 8-Bit imagery? Perhaps it reminds them of simpler times, when the world was uncomplicated and could be summed up in simple, colorful terms, where Italian Plumbers rescued their girlfriends from the clutches of giant turtles in bondage gear. 8-Bit is nostalgia. 8-Bit is simple pleasure. Life is complicated and the world is a complex network of daily challenges – it shouldn’t be. The world should be 8-Bit, simple, colorful and fun. That is what 8-Bit does and that’s why the world continues to love it, thirty years after its creation.

So, 8-Bit was an unintentional art movement, and I am very grateful for this wonderful accident.

Today, there are artists who recreate these simple times in paintings, collages and sculptures–artists who have realized the power of 8-Bit imagery and brought it into the 21st Century. Art these days has a habit of trying to be too clever and arguable demonstrating its lack of ideas and desperation to shock. This doesn’t have to be the case. Art should be fun and be simply something cool to look at, without pretence. That’s why I love 8-Bit art. It doesn’t pretend to be deep, or profound, it’s just rad images that make people happy, just like they did thirty years ago.

8-Bit has even found its way into Street Art, with Invader, the Bansky of 8-Bit, anonymously decorating walls and buildings across the globe with 8-Bit images. 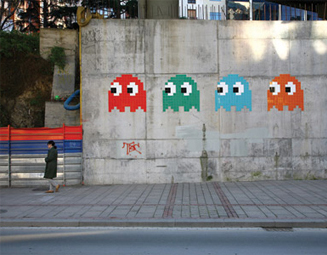 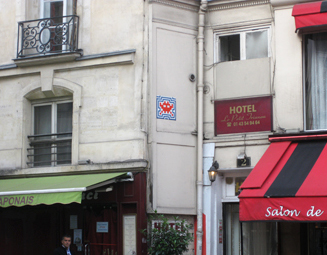 When I was developing as an artist, I realized that 8-Bit was my past, present and future. There simply isn’t a type of imagery I prefer, so my art should represent what I love.

I produce 8-Bit mosaic paintings of people, from the worlds of music, film and TV and influenced by our video gaming history. Simple, colorful and nothing but cool to look at, just the way art should be. 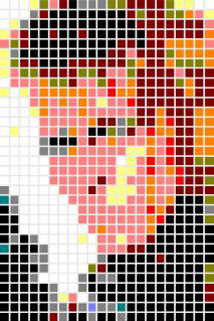 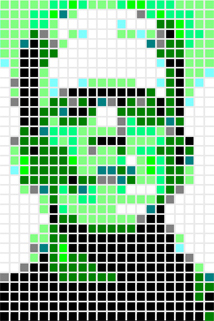 8-Bit is great and is here to stay.