Handclap Games of the Eighties

Home » Handclap Games of the Eighties

You close your fuzzy-kitten Trapper Keeper and stow it under your desk. Your second grade class lines up and thunders outside for playtime. The boys head directly toward the sharp steel seesaws, tetherball, and merry-go-round, those wildly unsafe and now-defunct playground structures we adored. And sure, dizzying centrifugal force and strangulation hazards were exciting, but if you were a girl, you were just as likely to play some quieter, one-on-one games with your friends. 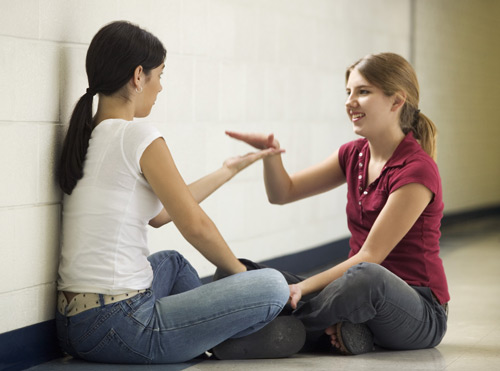 You stood face-to-face with your best friend, similarly clad in pinstriped, pleated jeans, elastic belt, ribbon barrettes, and Shirt Tales t-shirts. You both raised your hands up in preparation and began to chant and handclap in perfect synchronization, like the little girls in this video everlastingbeauti:

Of course, there were several handclap games girls played in the eighties, and you probably had your own favorite. I was especially fond of the Dr. Pepper song and its accompanying handclap game. These little girls do it almost as I remember, although instead of the thighswish-thighswish-snap move, we did a thighslap-thighslap-thighslap thing. The swish-snap is cool, though, and I think I prefer it. The Idssplash1 girls have a great explanation of the moves:

In the eighties, we liked to mix up the songs for our handslap games with commercials or other fun jingles. The Dr. Pepper handclap moves worked great with the oh-so-naughty Miss Susie song:

HELLo operator,
Give me number nine,
And if you misconnect me,
I’ll kick your little…

BeHIND the ‘fridgerator,
There was a piece of glass,
Miss Susie sat on it,
And cut her little…

ASK me no more questions,
I’ll tell you know more lies,
The cows are in the pasture,
Making apple PIES, PIES, PIES-PIES-PIES!

(And there are a bazillion interpretations of this song, it seems, featuring both Miss Suzy and Miss Lucy. Apparently I missed out on the boys zipping up their flies in the last stanza, as well as some final verses that vary from version to version.)

The Idssplash girls have several other great instructional videos that you might enjoy, including games called Bim Bum and Slide. Some ring a bell and some are entirely new to me.

My other handclap fave was sung to Say, Say, Little Playmate. You started off by curling your fingers together with your friend and gliding your forearms back and forth, like a Nordic Track, during the first line. Then you went straight to a simple alternating patty-cake move throughout the rest of the song. I’m seeing that the YouTube versions of this song are calling it Say, Say, My Playmate, or even See, See, My Playmate, so it’s entirely possible that the kids I grew up with were just, like, getting it wrong.

In the vein of Garbage Pail Kids, the sweetness of the Playmate song was corrupted into something grody and utterly shocking. (Well, to our eight-year old sensibilities, anyway.)

Say, Say, My Enemy,
Come out and fight with me,
And bring your bulldogs three,
Climb up my sticker tree.
Slide down my razor blade,
Into my dungeon door.
And we’ll be jolly enemies,
Forever more, more, more-more-more!

I’m totally delighted to see that some kids are still playing these handclap games, and it’s cool to learn that there are some games I’ve never even heard of. I tried to teach the 1980s Dr. Pepper song to my sons when they were little, but, alas, handclap games appear to be the sole province of the feminine set. If you’re fortunate enough to have little girls in your life, be sure to pass on these sweet handclap games to them. They’re an innocent, adorable, and awesome slice of your eighties girlhood.