VHS versus Betamax: The Great Format War of Our Time

Home » VHS versus Betamax: The Great Format War of Our Time

Picture yourself at your local video rental shop in 1984 – you know the one, in the local strip mall between the convenience store and the dry cleaners, drab grey carpet and rows of wire shelves filled with propped up cardboard boxes. You head for the new releases to grab something for the weekend and are shocked to see a copy of The Empire Strikes Back, sitting all alone. You instinctively reach for it but stop when you realize something isn’t quite right . . . The box is a little short, yep, it’s a Beta copy. Back to the drawing board.

You probably didn’t think about it, but at that moment, you were on the front lines of one of the great format wars to play out in the public eye. We know that VHS triumphed, but how did that happen? Books have been written on the topic, but in the interest of brevity I will quote Inigo Montoya “There is too much – let me sum up:”

While open-reel videotape equipment had been around in the professional broadcast world since the 1950s, the first video cassette format, U-matic, was introduced by Sony in 1971. U-matic was developed by Sony but a group of manufacturers, including JVC, agreed to standardize on the format. While Sony had intended U-matic to be a consumer format, the price – $1,300 for a playback-only deck, equivalent to $7,000 today – prevented widespread adoption.

A few years later, U-matic had found success as a professional format and Sony had a new consumer format in development – Betamax. Sony demonstrated Beta for other manufacturers with an eye toward creating another standard, however, this time an agreement was not forthcoming. JVC had witnessed Sony’s domination of the U-matic market and was not interested in a repeat, and so they were quietly developing a competing format, the Video Home System – VHS. 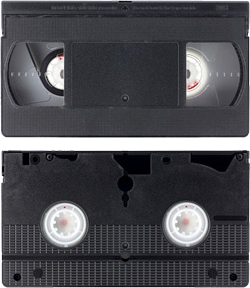 Sony was first to market, introducing Betamax in 1975 and continuing to press the Japanese government to adopt and enforce Betamax as a standard. JVC ignored this effort and busied itself licensing the VHS format to partners, including Matsushita, Japan’s largest electronics manufacturer at the time. The first VHS decks arrived in the United States in 1977 – in spite of Sony’s two-year head start, by 1980 VHS commanded 80% of the US market.

There were many factors that contributed to the broad adoption of VHS in the US but I’m going to focus on two big ones:

The first was recording time. RCA’s launch product in the US, the VBT200, could record four hours on a single cassette, while Betamax cassettes could only hold one hour. If you wanted to record a football game, Betamax was not going to be up to the task, and RCA highlighted that with their 1977 advertising slogan, “4 Hours, $1,000, Selectavision.” Sony eventually improved the capacity of their cassettes, but they were never able to equal VHS when it came to raw recording time. 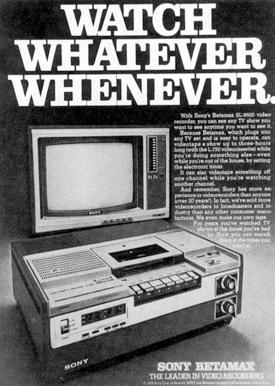 The second was misjudging the frugality of the American consumer. Sony’s marketing campaign focused on Betamax’s technical superiority, and it was successful – you remember that one guy with Betamax, he would go on endlessly about how much better the format was – even though he had no idea what luma/chroma crosstalk was and probably thought horizontal line count had something to do with “Scarface.” It’s true that Betamax was technically stronger, but the differences between Betamax and VHS were such that an average viewer with an average television set was unlikely to see much of a difference. In 1977, a deck of either format was retailing for around $1,000, but manufacturing costs for VHS transports dropped quickly as more companies licensed the technology and economies of scale started to kick in. When given an opportunity to spend hundreds of dollars less on a VHS machine that was “good enough,” the American public voted with its collective wallet.

In 1988, Sony conceded defeat and started manufacturing VHS players under license from JVC, and in 1993 they stopped offering Betamax machines in the US market. VHS continued to reign supreme until it was inevitably supplanted by DVRs and DVD players. Sometimes, being first and best doesn’t guarantee the win – sometimes people just want to record their TV shows.