One of the most awesome things about video games in the early 80s was that, just about every time you went to the arcade, there was a new game vying for your attention (and your quarters). As far I was concerned, some games instantly faded into the woodwork, while others made an indelible impression.

I don’t remember exactly when or where I first played it, but Spy Hunter was a game that hooked me instantly back in 1983. Being a fan of James Bond movies, it was a trip to get behind the (virtual) wheel of a car bristling with machine guns, missiles, smoke screens, and oil slicks. When I started collecting coin-op video games (www.davesclassicarcade.com), Spy Hunter was one of my first acquisitions.

A few years ago, I got a chance to talk to the game designer who brought us this arcade classic, George Gomez. Those familiar with the world of pinball know Gomez as a pinball designer. However, before he went on to design pinball classics like Monster Bash and Revenge From Mars, he designed several video games for Midway.

After designing the equally-classic TRON arcade game, Gomez was going to make a helicopter-based game. However, while on a trip to Japan, he picked up a Walkman and a cassette of James Bond’s greatest hits.

“I started thinking about the scenes in Bond movies where he is obviously overwhelmed with enemies and the music comes in and he has to out fly or out drive the enemies,” Gomez said. “The tension to survive, the way the music makes you feel heroic, the power of manipulating the weapons and the vehicle. I could see it in my head so clearly.”

Gomez was teamed with his TRON co-creator, Tom Leon, to build a game based on his Bond-inspired idea. Gomez had a roll of drawing paper and he drew the road as he unrolled it, adding ambush moments, events, and vehicles. Soon, the roll stretched around the perimeter of Leon’s cube and was filled with game notes.

The Spy Hunter course was all mapped out, and what happened depended on how you play. The team worked together to create the enemies and the allies the player encounters along the way. 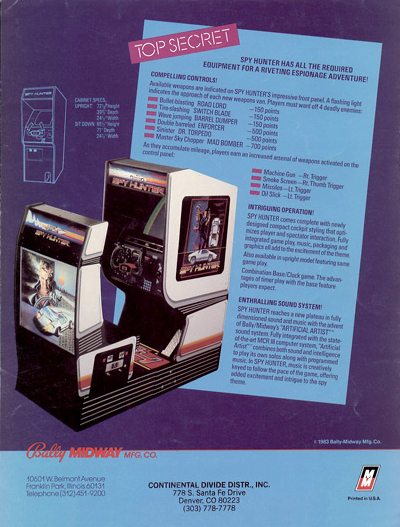 “I laid out the basics tire slasher, bumper, bike, helo, sniper, gunner,” Gomez said. “Tom tweaked ’em and gave them the funny names. We argued about the truck. I hated the notion of the car just growing weapons so I suggested the weapons truck but adding it was work. Eventually the truck became a key element of strategy. The timing of it and the notion of having to survive until you got to it under fire became a lot of fun. The boat was suggested by a guy named Steve Ulstad that was an artist in the group.”

There are a couple of persistent rumors about Spy Hunter that I brought up to George. The first is that the original music in the game’s prototype was the James Bond theme and that the game was originally intended to be based on the James Bond license.

“All true,” he said. “The Bond theme came straight from the cassette that I picked up in Tokyo. We couldn’t get the license, so [we went with] Peter Gunn. I suggested giving the player music only when he had weapons to reinforce the hero feeling and the Zen of driving music.”

Gomez laid the other rumor to rest—the one that says that there is an end to the game, involving a graveyard of some sort and a scene where the driver exits the car. Gomez confirms that’s not the case.

Although Spy Hunter stands as one of the most popular games of the 80s, its sequel, Spy Hunter II, has been labeled one of the worst games of all time. Gomez—who had nothing to do with the follow-up, was not a fan.

“It was horrible and obviously done by someone that didn’t understand the first game,” he said. “I think it was ambitious to try to accomplish a first person driver given what they had to work with. It’s an issue that I still see today, someone enamored with a look as opposed to whether something is fun. I wish those guys would go make movies already and leave the games to people interested in making interactive fun.”

If anyone knows interactive fun, it’s George Gomez. It has been 29 years since I first laid eyes on Spy Hunter, and it’s still one of my favorite coin-op video games. Definitely one of those 80s arcade classics that has survived the test of time.