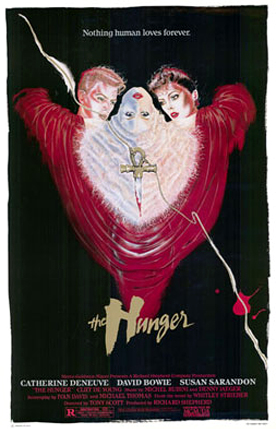 ABOUT: The Hunger is a 1983 British romantic horror film directed by Tony Scott. It is the story of a love triangle between a doctor who specializes in sleep and aging research and a vampire couple. The film is a loose adaptation of the 1981 novel of the same name by Whitley Strieber, with a screenplay by Ivan Davis and Michael Thomas.

This film stars David Bowie, Catherine Deneuve and Susan Sarandon. Even I had to re-read that. I mean, wow and a half.

80s films aren’t only John Huges-esqe (he is so fabulous) and Bubblicious bubble gum. There was a darker side or the attempt at one. This film embodies qualities like New Wave and early Goth . . .

Me, the 80s and vampires . . . I was addicted to the Anne Rice vampires in The Vampire Chronicles [Interview with the Vampire (1976), The Vampire Lestat (1985), The Queen of the Damned (1988)]. On several Halloweens I dressed up as a vampire. When I lived in Paris (oui) for a few months in the 80s I had bought a long, curly black wig and a very bright red lipstick. I used both as a part of my costume and a friend brought me fangs.

Fashion is interesting in this film because while there is a retro vibe, this vibe is filtered through an 80s aesthetic. What you are actually seeing is an 80s vision of the past. For instance, Miriam Blaylock (Deneuve), dresses in a 1930s or 40s way but she often wears ankle boots with pointy toes and heels and her costumes often have shoulder pads. Her makeup is very 80s – heavy, bold colors and very noticeable.

The stylishness of this film – it is very stylish – has an 80s sensibility of what that means. A definition of ‘style’ or ‘chic’ changes from decade to decade. What we might consider stylish today is very different than what was conceived of in the 80s. We get an 80s vision of style. 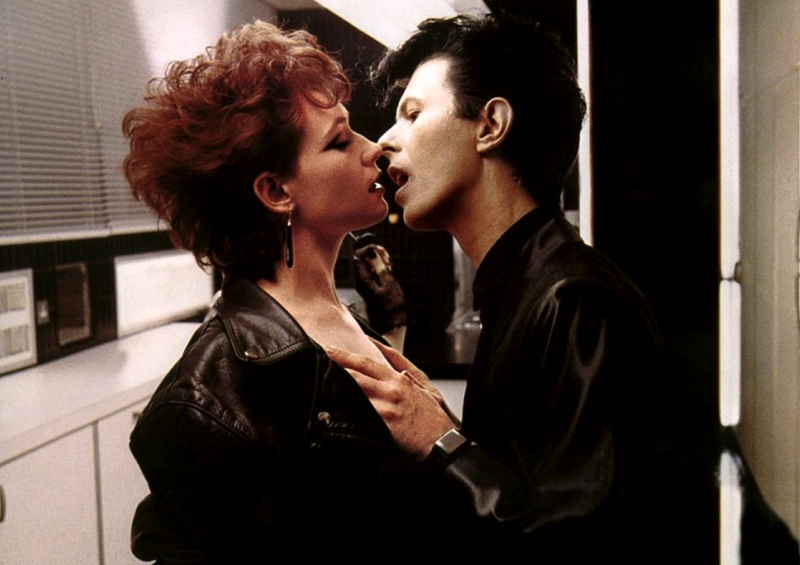 Susan Sarandon as Sarah is the only character not dressed up. She wears a pant-suit and a white t-shirt. Casual-wear of the 1980s rests squarely on her shoulders. I really do not think she’s typical though. As usual, she seems to go against the grain.

The story is good. Sarah Roberts (Sarandon) is a doctor researching aging. The investment both vampires have in her work is critical. Miriam loses her loves to eternal aging and John is getting older. There are nice parallels between Sarah’s research and John – this is how we learn about his condition. Through flashbacks we see that Miriam has been around since Egyptian times. She ‘made’ John a few centuries ago. 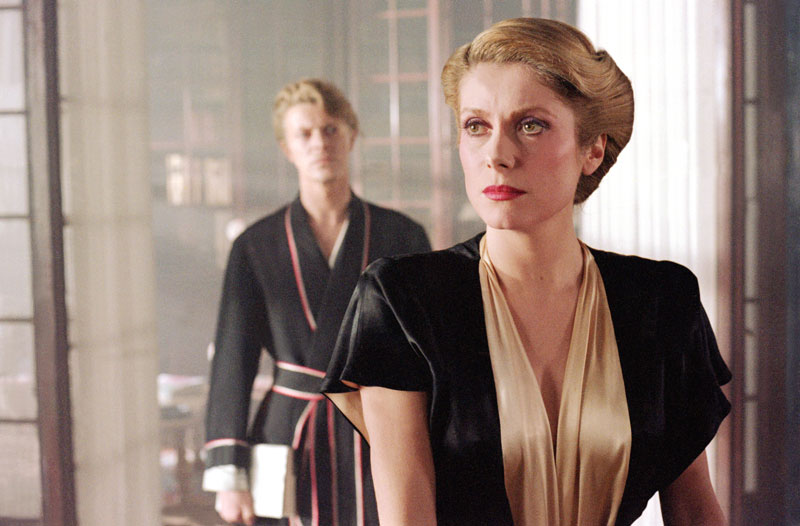 The people Miriam and her cohort (Bowie) pick up to feed on are typical of the ‘New Wave’ style very popular in the 80s. They wear black clothing and sunglasses at night. The ‘alternative’ club the Blaylocks go to at the beginning of the film . . . well, in the 80s I witnessed clubs very similar. They attend an ‘underground,’ alternative club and we get a tiny peek into that lifestyle.

Speaking of clubs, director Tony Scott discovered the group Bauhaus [With their dark and gloomy sound and image, Bauhaus are generally considered the first gothic rock group. ] in one in London and decided to put them in the film. They perform the song, “Bela Lugosi Is Dead.” The film has an exquisite soundtrack that I am going to try to hunt down. I am a huge fan of popular 80s music but the music here is very different. It is a mixture of classical music and haunting alternative melodies. [80’s bands that share their sensibility: Sisters of Mercy, early Ministry, Siouxie and the Banshees, The Cure, Killing Joke, The Birthday Party/Nick Cave, Gene Loves Jezebel]

I want to discuss the camera-work, the cinematography by Stephen Goldblatt. There are some innovative shots, beautiful shots but there are also certain camera movements that you see in other 80s films. For example the quick zoom ins and the grainy quality of the film itself, especially noticeable in the outside shots.

There are a few other things but I don’t want to spoil the film for those of you that haven’t seen The Hunger. In the 80s I was not Goth and these days one obviously does not need to look a certain way or have a certain sensibility to enjoy Vampire films. There was a beauty for me in “difference” which has stayed with me to this day. This film reminds me off an appreciation that has been around for decades.