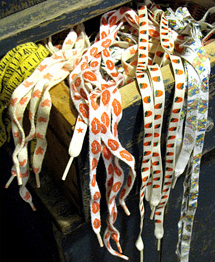 Go back to the early 80s, if you will, to a time of endless wonder and fashion possibilities. Back when we made our own fashion rules; we laughed in the face of conservative clothing. Ha! You non-cushioned shoulders! Ha! You deflated pants! In the midst of all the laughter, I was battling a dilemma…deprived was I of those awesomely cool Air Jordans or Adidas Grand Slams that would have made me cool. I had Keds. Correction. Not even Keds. The white five-dollar tennis shoes they sold at K-Mart that were attached to each other with a piece of plastic string. Remember the “shuffle walk” our moms would make us do when trying on shoes at K-Mart? It was impossible to walk normally.

At any rate, plain white tennis shoes. Boring. Too boring to even make me yawn. What in the world could I do to make them POP? To make them stand out? Sprinkle them with glitter? Nope, too messy. Color them with markers? No way, too “elementary school.” Upon wandering around the shoe department at the same local K-Mart, I found them! The items that would throw me into the magical world that was popularity! I found the perfect accessory: PATTERNED SHOLACES! They were bright, they were adorable, THEY were calling MY name! How else could I show the world how much I enjoyed rainbows and hearts and smiley faces? Even Punky Brewster wore them, so they had to be cool, right? (Yes, I used “Punky Brewster” and “cool” in the same sentence.) 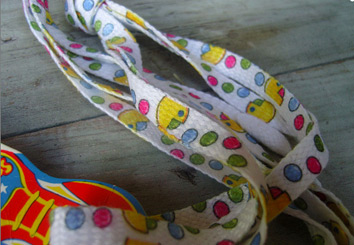 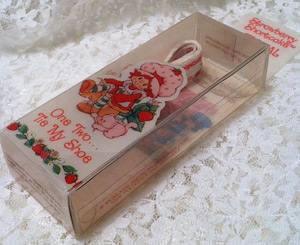 Looking back on those days, I have to laugh and wonder what we were thinking. Did absolutely everything we wore have to be fluorescent, glow-in-the-dark, or patterned? Duh. Of course it did! If it could accomplish all three requirements, even better!