Psychedelic Furs at the Trocadero, Philadelphia 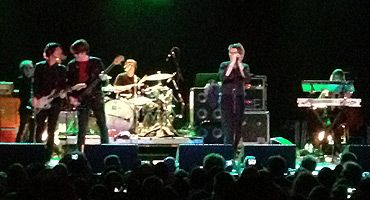 Singer Richard Butler was the last of the Psychedelic Furs to come on stage at the start of their show, and he appeared with a fey enthusiasm that would last the entire show, as well as with

a courtesy bow that seemed copied from some movie version of Shakespeare’s Puck character – impish yet playful. The gesture,repeated multiple times in their concert, seemed a fitting start to a victory lap, of a band playing favorites to an enthusiastic crowd.

I have been to a number of reunion shows lately, but this one was played up specifically as a nostalgia event, as the opening event in an 80s-themed “Awesome Fest” taking place across Philadelphia this summer. People came to relive a bit of their youth but also because they were big Furs fans. If the crowd clearly came for hits like “Heaven,” “Love My Way” and especially “Pretty in Pink” (naturally held until the encore), they seemed almost as into some of the deeper cuts the Furs played, like Talk Talk Talk’s “Into You Like a Train” and Forever Now’s “Danger,” singing and dancing along.

The range showed in the band’s set, at first heavy on singles, especially from the more polished Mirror Moves and Midnight to Midnight (“The Ghost in You” “Heatbreak Beat” “Here Come Cowboys”) but gradually including older material, including songs from their debut LP like the postpunk “Soap Commercial” and a rocking “Pulse.” Their live version of “All of This and Nothing” was a terrific rendition of a personal favorite of mine.

The line-up consisted of half the original members: Richard Butler and his brother Tim on bass as well as Mars Williams, whose trademark alto and tenor sax was one of the things that made the band’s sound so distinctive among a crop of postpunk and new wave acts. The other signature to their sound, of course, is Butler’s raspy, blue note-flat vocal style. All singers face changing vocal capability with age, but Butler’s voice has held up well and is as fitting for both the rockers and more romantic half-ballads as ever. Newer members Rich Good (guitar), Amanda Kramer (keyboards), and Paul Garisto (drums) rounded out the sound.

The band had a strong and varied set lasting around and an hour and a quarter, then came out for an encore, “Pretty and Pink” and “Sleep Comes Down.” It was a great show by a band still happy to recap their career for fans.