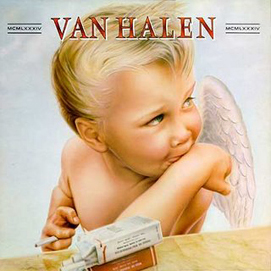 If you weren’t fetching chips from the kitchen or taking a bathroom break during the third quarter of Super Bowl XVIII (the Raiders killed the Redskins that year), you saw the famous Apple commercial that introduced the Macintosh computer. The tagline at the end read, in part, “[y]ou’ll see why 1984 won’t be like ‘1984’.” With respect to the late Steve Jobs, the release of Van Halen’s 1984 was, for me, why the year was not one of Orwellian dystopia.

The album was released in January, 1984, and was the band’s sixth studio albums. It followed the somewhat puzzling Diver Down, which was not well received by fans who had come to expect the hard-driving, guitar-driven fare of Women and Children First or Fair Warning. 1984 reached number two on the Billboard Album charts; “Jump” was a number one single. “Panama” and “I’ll Wait” both reached number thirteen on the singles chart.

For me, however, the album recalls a summer spent riding my bicycle all over town, going to the pool, hanging out at (interminable) swim meets. Listening to it even today, I smell chorine, Coppertone, and Solarcaine. I listened to 1984 all summer on my recently-acquired Panasonic portable tape player (its answer to the Sony Walkman)—a gift from my grandfather, who wouldn’t live out the year. The Panasonic was about the size of a Kindle and about twice as heavy. It had a gray plastic case and an adjustable strap. I remember it costing $100 in 1984 (around $225 today). After receiving it, I went immediately to the record store in my grandparents’ small Georgia town and bought 1984. My grandmother was amused by the baby on the cover smoking a cigarette.

I listened to the whole album at one sitting—something I still rarely do—and was blown away. From the synthesized overture “1984” to “House of Pain,” the album’s final track, I felt an excitement about music and about a band that I had never felt before. The first side, plus “Hot for Teacher” on side two are among the best songs the band ever made. Though I didn’t know it at the time, it was the last album the four original members would ever make together.

If I had to pick my favorite songs from the album, they would be (in order): “Panama,” “Top Jimmy” (a tribute to the lead singer of Top Jimmy and the Rhythm Pigs), “Drop Dead Legs” (a tribute to Brooke Shields), “Hot for Teacher,” and “Jump.” “Top Jimmy” in particular is a real treat—one of the band’s lesser-known songs but one that holds up quite well today. 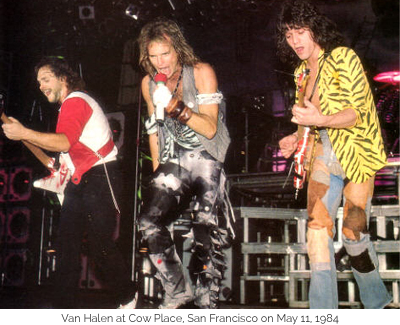 I was out of town when Van Halen came through in July of that year, so I never got a chance to see the original lineup. (I would have to wait until the 5150 tour when Sammy Hagar had assumed duties as front man after David Lee Roth’s departure.) I did hear a bootleg tape of the concert I missed. It was the last leg of their tour and the tension among the members seemed to have gotten to them. Roth sounded so drunk on the tape that you couldn’t easily make out which song he was singing. After all these years, though, 1984 still satisfies. It is a great album by a band at the top of its game.

Oh, and if you liked the “Hot for Teacher Video,” with the little Van Halen mini-mes, be sure to check out the video for Fountain of Wayne’s “Stacy’s Mom,” which contains an homage to that video plus a nod to Fast Times at Ridgemont High.