AUTHOR’S NOTE: “How did I forget ‘Home Sweet Home’?”

That’s what I’ve been asking myself ever since I read the feedback to my last post, the one about the greatest songs from 1985. Sure, I couldn’t mention every big song. But, next to Dead or Alive’s “You Spin Me Round,” Motley Crue’s signature love song was probably the most glaring omission. Of all the songs to overlook, how did I miss THAT one?

(Actually, I think I know how: when I was first getting into music, Motley Crue always sort of scared me. Or more accurately, the kids who liked Motley Crue scared me. So that lingering unease might have had something to do with it. That, and my fear of excessive umlauting…) 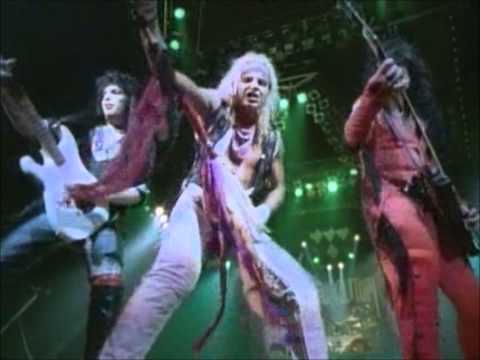 Of all the guilty musical pleasures, the Power Ballad may be the guiltiest… and the most paradoxical.

What Makes a Power Ballad?

The hybrid name says it all. First, you have the “ballad” part: a gooey confession of love, usually complemented by a heartfelt piano, that builds to a lighter-waving (now cellphone-waving) crescendo of electric guitars and earnest wailing.

Of course, that could also describe any garden-variety Peabo Bryson song. What makes the Power Ballad unique is the “Power” part — represented by the hard-rocking, hard-living bad boys, notorious for consorting with all manner of groupies, who now croon mushily about settling down with that one special girl. It’s the out-of-nowhere combination of these two opposites — the hard with the soft, the hedonistic womanizer with the hopeless romantic — that makes Power Ballads so paradoxical.

And a little embarrassing, both for the band and the audience. In his 2001 article “Don’t Fight the Power,” journalist/ former SPIN Magazine editor Charles Aaron describes the Power Ballad as “the moment when macho rockers surrendered all their dignity” by seemingly laying their souls bare. But the fans do some dignity-surrendering as well by singing along, and thus acknowledging they too experience those less-than-macho feelings.

Ultimately, the Power Ballad links artist and listener in a bond of wussiness, what Aaron calls “a general-admission utopia where both performer and audience share their most uncool desires.”

But the bad boys don’t care about being cool, as long as they are well-compensated. And in the case of Power Ballads, they usually are; after all, that’s why they wrote the darn song in the first place. Make no mistake, Power Ballads are always a metal band’s deliberate attempts to do two things: (1) get on mainstream radio; and (2) court more female fans. The fact that these bands are seemingly revealing their true selves doesn’t make a Power Ballad any less calculated. In fact, this marriage of what Charles Aaron calls “vulnerability” and “ruthless business practice” just heightens the Power Ballad paradox.

The 1980s didn’t spawn the Power Ballad (Aaron claims they’ve been around since at least Led Zeppelin’s “Stairway to Heaven”), but in the 80s, it became mandatory for a hard-rocking band to show its soft side. But what song sits at the top of the 80s Power Ballad Pantheon (PBP)?

Hard to say, especially since people often mis-categorize songs as Power Ballads. (For example, some call Toto’s “Africa” a Power Ballad. I mean… really?) So I have created a completely non-scientific rubric for evaluating the validity and effectiveness of an 80s Power Ballad. Here are the criteria:

Criteria #1: Is this a love song? (0 points — just a way of eliminating songs right off the bat)

The Power Ballad can be about a hoped-for love, a current love, or a long-lost love… but it has to be a love song. So, by this reasoning, Bon Jovi’s “Wanted Dead or Alive” or Heart’s “These Dreams” wouldn’t qualify as PBs, though “Never Say Goodbye” and “Alone” would.

Criteria #2 (10 points): Is there a discrepancy between this song and the music the band typically creates?

Again, incongruity is key to a Power Ballad. The song, according to Charles Aaron, needs to come out of the mouth of an “absurdly improbable performer.” For our purposes, the more improbable the performer, the higher the score.

So… I would rank Journey’s “Faithfully” or Foreigner’s “I Want to Know What Love Is” low in the Power Ballad Pantheon, simply because there is not that big a gulf between those songs and the kind of stuff they typically put out. On the other hand, Def Leppard’s “Bringing on the Heartbreak” and Cinderella’s “Don’t Know What You Got Till It’s Gone” would get high marks in this category, simply because they seem out of character.

Criteria #3 (10 points): Would a male like this song, despite the shame factor?

The best Power Ballads make male listeners come face to face with societal stereotypes, the ones that tell us it’s somehow not masculine to acknowledge our emotions. If, as Charles Aaron maintains, Power Ballads are all about exposing the “uncool desires” in its male listeners, then they’re also about grappling with the shame or embarrassment that accompanies any admission of “uncool”-ness. (For this reason, I would never call Aerosmith’s “Dream On” or even “Stairway to Heaven” a Power Ballad, because I’ve never known anyone who considered them “uncool.”)

Now, the strength of the truly great Power Ballad is that the male fan eventually overcomes his feeling of shame and says, “Yeah, this song makes me cringe a little, but hey, I still like it.” If you can admit that, give the song a high score. (And give yourself a high score, too, for your willingness to stare down these ridiculous and artificial gender stereotypes.)

Criteria #4 (10 points): Is this the most successful song in this band’s discography?

As I mentioned earlier, the purpose of the Power Ballad is to make money by widening the band’s fan base. (That’s not a judgment, mind you. Just a fact.) The more mainstream success the song generated for the band, the higher the score.

The Best of 80s Power Ballads

As for the songs in the upper echelon of the Power Ballad Pantheon, I feel three would score in the high twenties, based on these criteria: Motley Crue’s “Home Sweet Home,” Poison’s “Every Rose Has Its Thorn,” and Warrant’s “Heaven.” But as for which is the best… don’t make me decide!!!

I really, really want to give it to “Home Sweet Home,” their most famous song, not to mention the one that marked the biggest departure from their usual stuff. And even though it only reached 89 on the Billboard charts during its initial release (still can’t believe that), the video reigned the most requested video on MTV for three months — prompting MTV to enact its unofficial Crue Rule, which said no song could stay on top for more than thirty days. Furthermore, the success of that video is what basically kick-started the PB trend in the 80s; basically, without “Home Sweet Home,” there would be no “Every Rose Has Its Thorn” or “Heaven.”

Finally, Carrie Underwood did a cover version for American Idol. When Underwood covers your work, how can you NOT be at the top of the Pantheon!

But here’s the thing: I am not confident “Home Sweet Home” fulfills my first criteria. I am not sure it’s a love song! Yes, it has the lines “Take me to your heart/ Feel me in your bones”… but he never says “love” or “girl” or “baby” or anything like that. I mean, the narrator wants to get home. How do we know he doesn’t want to go home to see his mom? Just saying…

So, after all this, I ultimately must turn to the readers. Just what IS the greatest Power Ballad of the 80s?