15 on 45: Fifteen Questions about My Forgotten 45 Collection

Home » 15 on 45: Fifteen Questions about My Forgotten 45 Collection

My brother Matt recently sent me a text: “Found the old records!” And accompanying this joyous announcement was a picture of my old 45 record of Eddie Money’s “Take Me Home Tonight.”

A little context: Matt had purchased a record player, but he had no actual records to play on it. So he Indiana-Jones-ed our parents’ basement, looking for the collection of 45s I had back in high school. The search seemed fruitless, until my dad miraculously unearthed them — packed away in an old Southern Comfort box, of all things. (Who in our house even drinks Southern Comfort?)

After I got his text, I called Matt, and we reminisced about these lost-now-found treasures. Even after thirty years, I couldn’t believe how clearly I remembered these records. And I had a ton, from the obvious (“Maneater,” by Hall and Oates) to the completely obscure (“Right Between the Eyes” by Wax).

For some I could even remember the crappy song on the B-side (e.g. “Till the Money Runs Out,” the flip side of Men at Work’s “Overkill”). I even remembered what a lot of these records looked like: the 45 for J Geils’ “Centerfold,” for example, had pink label with a hand-print on it.

Then I had an idea: Matt could could interview me about my 45 collection for LT80s. I thought he’d ask about my personal history as a former 45-ophile. (“What was your state of mind when you purchased Dead or Alive’s ‘Brand New Lover’?”) Instead, he tried to stump me with trivia questions — which is just as fun. So, here is the transcript of our conversation: fifteen questions about my forgotten 45s.

Matt: We’ll start off simple: What was the B-side of Simple Minds’ “Don’t You Forget About Me”?

Mark: “Alive and Kicking.” At least, that’s the version I owned. (Probably a re-release.) I remember thinking I scored huge, because the record actually had TWO good songs, when usually, the “B” in B-side stood for “Bad.” (Incidentally, I think the B-side to Huey Lewis’ “Power of Love” was, in fact, “Bad Is Bad.” Has a song ever been a more aptly named?)

Matt: Correct. (And to answer your incidental Huey question: no.) Next: You owned a 45 called “Help Me” from The Fly Soundtrack. Who performed the song? Bonus: What is that artist also known for? Bonus #2: Why the Hell did you buy it? 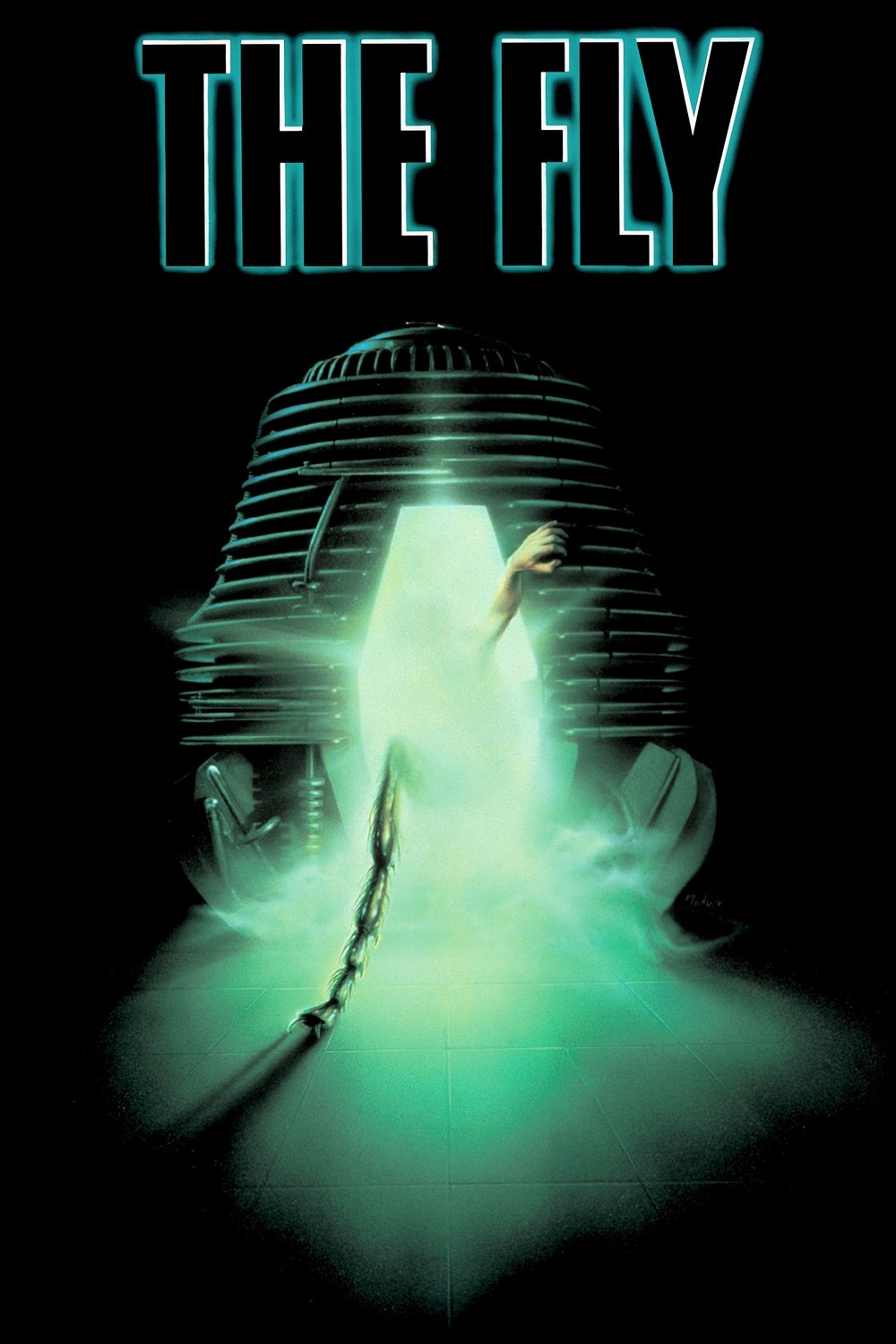 Mark: Bryan Ferry, formerly of Roxy Music, performed the song “Help Me.” As to why I owned it… you don’t remember my Fly phase? When I memorized Seth Brundle speeches, lusted after Geena Davis, and even drew that giant fly, complete with Saran-Wrap wings, that hung on my bedroom wall? So when I stumbled upon a song from the soundtrack, you can bet I snapped it up! Then I listened to the record, realized it sucked, and never listened to it again. (Seriously: it’s NOT a good song. I mean, it’s not even worthy to be a B-side.) 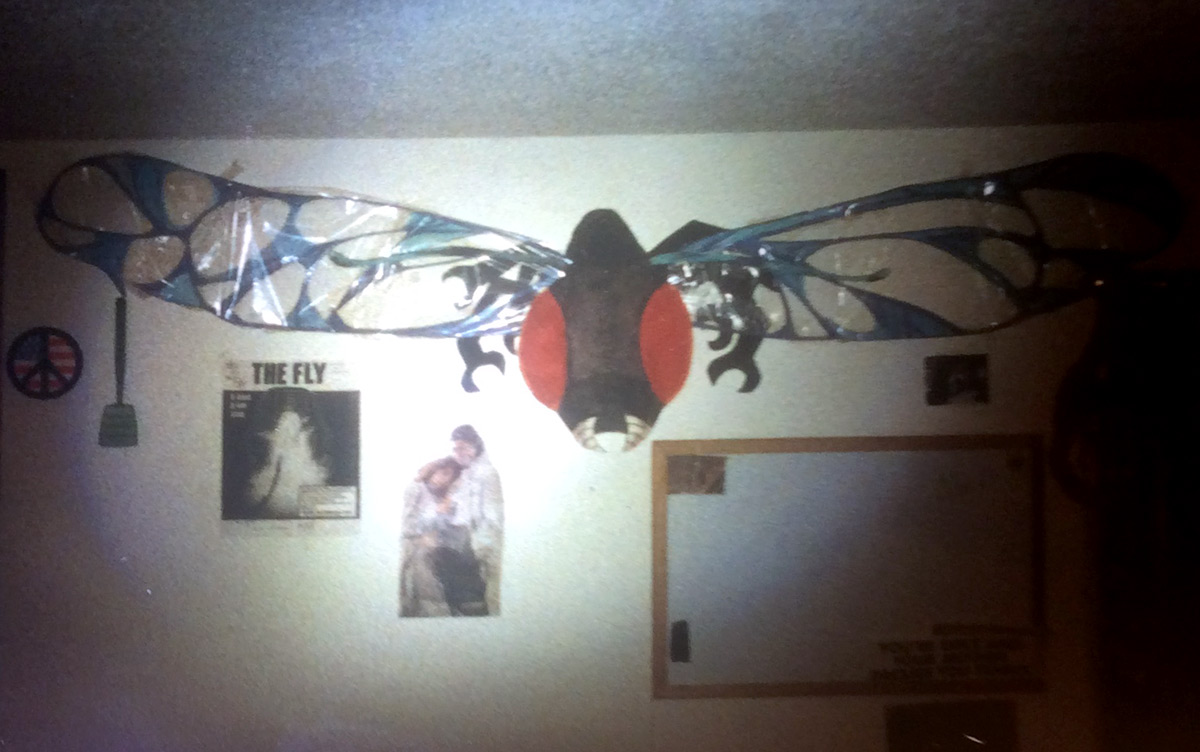 Matt: All correct. And I do remember the giant, Saran-Wrap fly. I was ten and even I thought it was weird. But what the heck? Was this crappy song even in the movie? Don’t you hate when soundtracks do that? (Note from Mark: “Help Me” is faintly playing as background music for a scene that takes place in a bar, when Seth Brundle breaks the bully’s arm during an arm-wrestling match.) Let’s move on: you have a Michael McDonald 45, but I can’t tell which side is the A side and which is the B side. Can you? The songs are “Don’t Let Me Down” and “No Looking Back.”

Mark: The A-side is “No Lookin’ Back,” which is a fantastic, criminally underrated song from 1985, in that “I-gotta-blow-this-town-because-it’s-too-haunted-with-memories” tradition. (Chorus: “I can’t hold on/ I can’t return/ Rivers will run/ Bridges will burn/ I’m not sure just how/ But there’s no turning back now.”) But I don’t blame you for not remembering it: in fact, for a while, I thought Michael McDonald and I were the only two people aware of its existence, until I heard it on the soundtrack to Thelma and Louise.

Matt: I remember your Thelma & Louise phase, as well. What was it with you and Geena Davis? Speaking of Soundtracks… you had a 45 of a hit song from a hit movie from 1987, sung by the star of that film. What was the song and who was the star/singer?

Mark: I loved the Back in the High Life album, so you can imagine my excitement in Summer 1988 when I found out Stevie was releasing a new single, “Roll With It” (which I’m thinking is the song in question). And you can imagine my disappointment when I actually heard the song. What an uninspired piece of trite, phoning-it-in trash. (That 45 must be yours. No way I bought that record.)

Matt: Bob Seger’s “Like a Rock,” also in your collection, was used in commercials by which automobile manufacturer for over ten years?

Mark: Ford. Was this great song cheapened by its use in a truck commercial? Maybe… but at least the ads introduced the song to a whole new generation of people. (Besides, Seger already sold out when he recorded “Shakedown” for Beverly Hills Cop II, so this certainly isn’t any worse.)

Matt: You are incorrect! Your arrogance has blinded you! It was Chevy! You whiffed on a softball. Or, in 80’s parlance, a Charlie Hough knuckleball!

Mark: Rats! And here’s something even more depressing: “Like a Rock,” which came out in 1986, is about a narrator — who may or may not be Seger himself — looking back wistfully at his lost youth. Now, according to my calculations, that narrator is around thirty-eight years old. (One of the verses says, “I was eighteen, didn’t have a care,” and later he muses, “twenty years, where’d they go?”) That means I am seven years older than that narrator, who was already feeling as if his best years were behind him.

Mark: Slade. A forgotten gem of a group, one that I applauded in a June LT80s column. (Plug! Plug!) 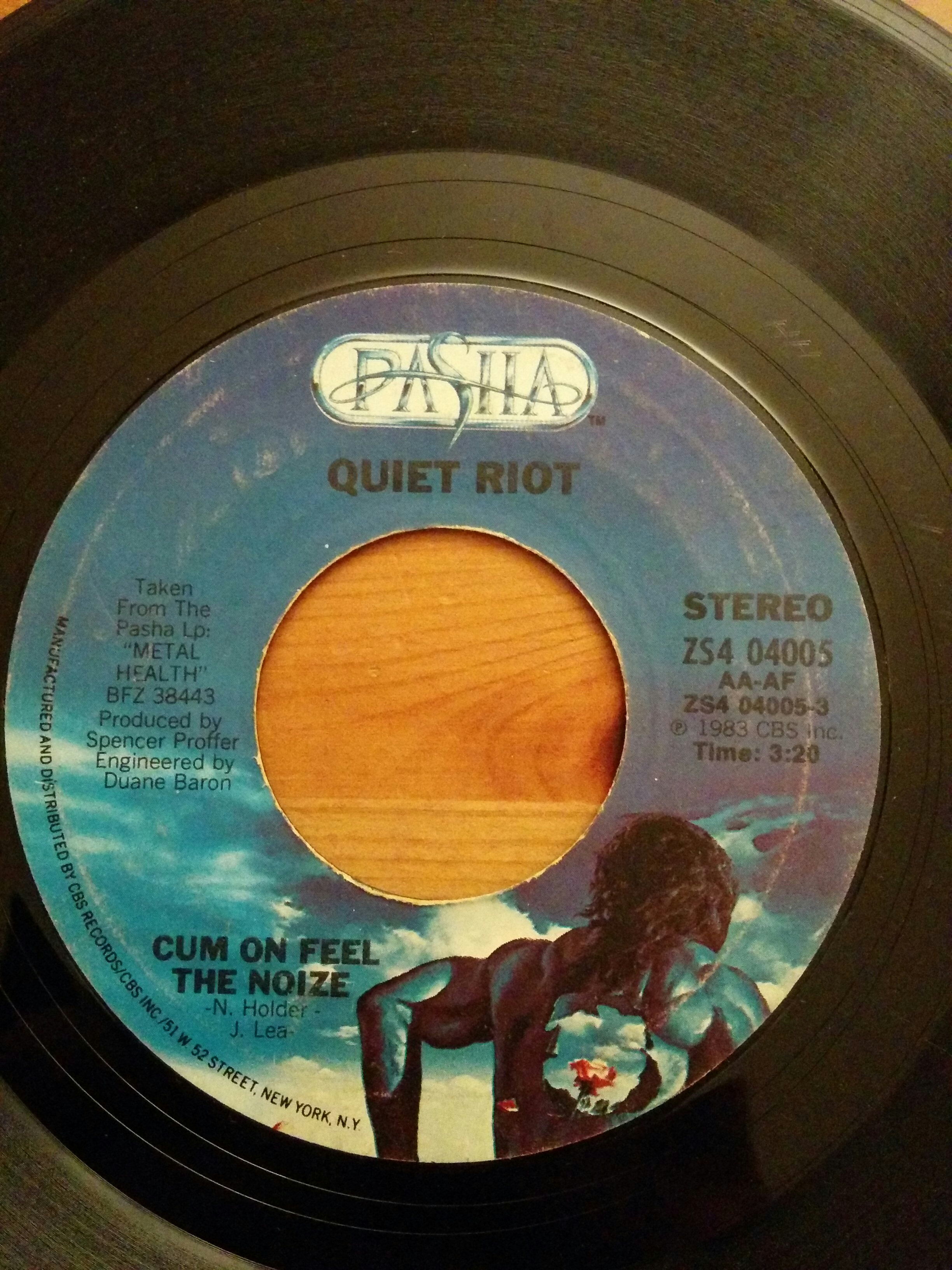 Matt: Which 45, either mine or yours (I hope yours), was the first hit for Cinderella? (Another Bonus: what rocker saw Cinderella perform and urged Mercury Records to sign them?)

Mark: I’d say “Nobody’s Fool” is the song. I probably bought it because I saw Cinderella in December 1986, when they opened up for Bon Jovi. (Was that the group that championed them to Mercury?) By the way, was Cinderella the most incongruous name for a heavy metal band? I mean, 80s bands had some pretty bad-ass names: Poison, Slayer, Skid Row, Grim Reaper. And these guys named themselves after a Disney princess?

Matt: Indeed, it was Cinderella; indeed, it was Jon Bon Jovi who recommended them; and indeed, the name is incongruous. Next question: Like most 80’s children, we were introduced to the song “Stand By Me” by the movie of the same name in 1986 (which I assume inspired you to buy the 45). However, the song was actually released in what year?

Mark: Hey, I know this! It was 1961, twenty-five years before the release of the film. (By the way, how lucky are you if you’re Ben E. King? You write a song in 1961 which ends up charting again a quarter century later? Does that mean the Jimmy Eat World guys can hold out hope for a resurgence in 2026?) 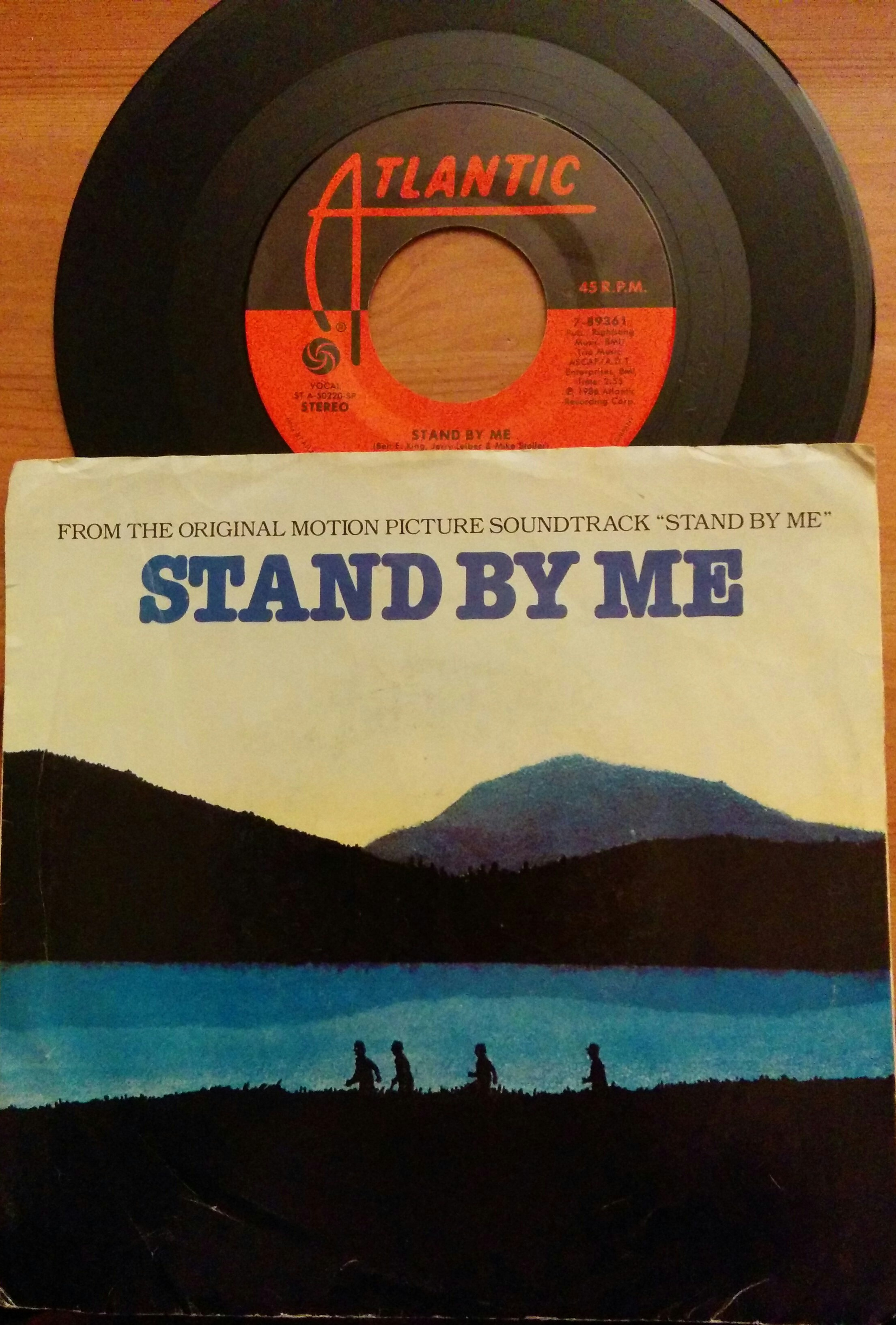 Matt: Probably the same hope that Wil Wheaton is holding out for the Stand By Me re-make. So, it is well-known that Springsteen never had a #1 hit, but he came close in 1984 when “Dancing in the Dark” reached #2. What song was #1 for five weeks that summer, keeping “The Boss” mired in second place? (Hint: you have the 45.) ***Side note: You don’t own even one Springsteen 45, you dope!***

Mark: Prince’s “When Doves Cry” — final answer. Thankfully, that 45 is the shorter version, not that freaky, unnecessarily protracted version, that features Prince shrieking like a wounded bird.

Matt: Eddie Money’s “Take Me Home Tonight” was based on a 1963 hit called “Be My Little Baby” by what band? (Hint: the lead singer is singing in the chorus, is in the video, and even had a small resurgence thanks to this 80s classic. I always thought it was Cyndi Lauper, but it wasn’t.)

Matt: Well, Ronnie Spector sings with him, but I don’t know the name of her band. You really thought it was Cyndi Lauper? And the fact that Eddie repeatedly sings “Just like Ronnie says” didn’t clue you in?

While we’re on the subject of the Money/Spector pairing… How trend-setting is Eddie Money, anyway? He made a mash-up a good twenty years before mashing-up was cool!

Matt: It was the Ronettes, but you are obviously correct with Ronnie Spector. (I guess I never knew he was actually saying “Just like Ronnie says.” In my defense, this was years before you could Google song lyrics.) Onward… Sting apparently wrote one of your 45’s after a thoughtful conversation with his future wife, Trudie. Sting noticed some sunspot activity that day, waxing “There’s a little black spot on the sun today.” Trudie’s reply became the title of this 45, which is?

Mark: Definitely cerebral. Apparently, after noticing the black spot, Sting said, “That’s my soul out there.” It was then that Trudie replied, “There he goes again: the King of Pain.” Good story, but for all we really know, he came up with it on the toilet. Next question: this 80s girl band each sang a verse of their biggest hit in 1986 (except the drummer). However, the difficult recording process apparently broke them up. The best part? They didn’t even write the song! What song am I talking about?

Mark: That would be “Walk Like an Egyptian” by the Bangles. Apparently, the drummer not only didn’t sing a verse, she was demoted to the whistling section. Whistling! Plus, they allegedly ended up replacing her drumming with a drum machine!

Mark: That would have to be Starship’s “We Built This City,” hailed as the Worst! Song! of All Time! by Blender Magazine. (Come on now… Of all time? What about Don Johnson’s “Heartbeat”, or Carrie Underwood’s “Inside Your Heaven,” or, of course, “Bad Is Bad”? No way “We Built This City” is worse than those. Blender be damned: I am PROUD to have owned “We Built this City” on 45!)

Matt: Last question: Correct me if I’m wrong, but you have only one 45 that received an Academy Award Nomination. It was also the #1 song in 1982, according to Billboard. What could that be?

Mark: Taking a stab here. Survivor’s “Eye of the Tiger”? If memory serves, that’s also one of the first 45s I ever owned. Dad bought me this and Steve Miller Band’s “Abracadabra” for my twelfth birthday. (Man, I hope I got other things that year!)

Matt: Good stab! (Maybe you should have said “jab” to complete the “Rocky” reference?) What’s even more remarkable is that a song from a Rocky movie was nominated for an Oscar. Did “No Easy Way Out” by Robert Tepper get that much love?

Mark: No, and that was a grievous oversight. So… how did I do?

Matt: You did very well: 14 out of 15 (not including bonus questions). Unbelievable, though, that you missed the “Like a Rock” commercial.