That song in the commercial: St. Elmo’s Fire

Home » That song in the commercial: St. Elmo’s Fire

The usage of John Parr’s chart-topping hit in an ingenious marketing campaign is just the latest example of the song’s surprising versatility and timelessness. While millions of us associate “St. Elmo’s Fire (Man In Motion)” with the Brat Pack movie “St. Elmo’s Fire,” Parr actually wrote the song in honor of wheelchair-bound Canadian athlete Rick Hansen.

The movie “St. Elmo’s Fire” didn’t meet expectations, either critically or commercially (it grossed less than $40 million at the box office). But like so many movies of the ‘80s, it found a comfortable home on cable, where Parr’s song and the movie’s themes of chaos and uncertainty during the early days of adulthood connected with an audience that was high school aged or younger in 1985.

By 1994, the impact of “St. Elmo’s Fire” was properly measured in an episode of “The Simpsons,” during which middle child Lisa complains she doesn’t like listening to the right-wing talk show Homer has on the radio. Homer notes Lisa can control the radio when she drives, after which…well, see for yourself what was pretty hilarious in 1994:

Parr never had another top-40 hit—don’t dare call him a one-hit wonder, he hit no. 23 in 1984 with the underrated rocker “Naughty Naughty”—but he seems content with the many lives “St. Elmo’s Fire” has lived, as he told this very site in 2011.

He’s also active on Twitter, where he’ll definitely RT you if you declare you’re buying an Android just because of its usage of St. Elmo’s Fire. Or so we have heard. 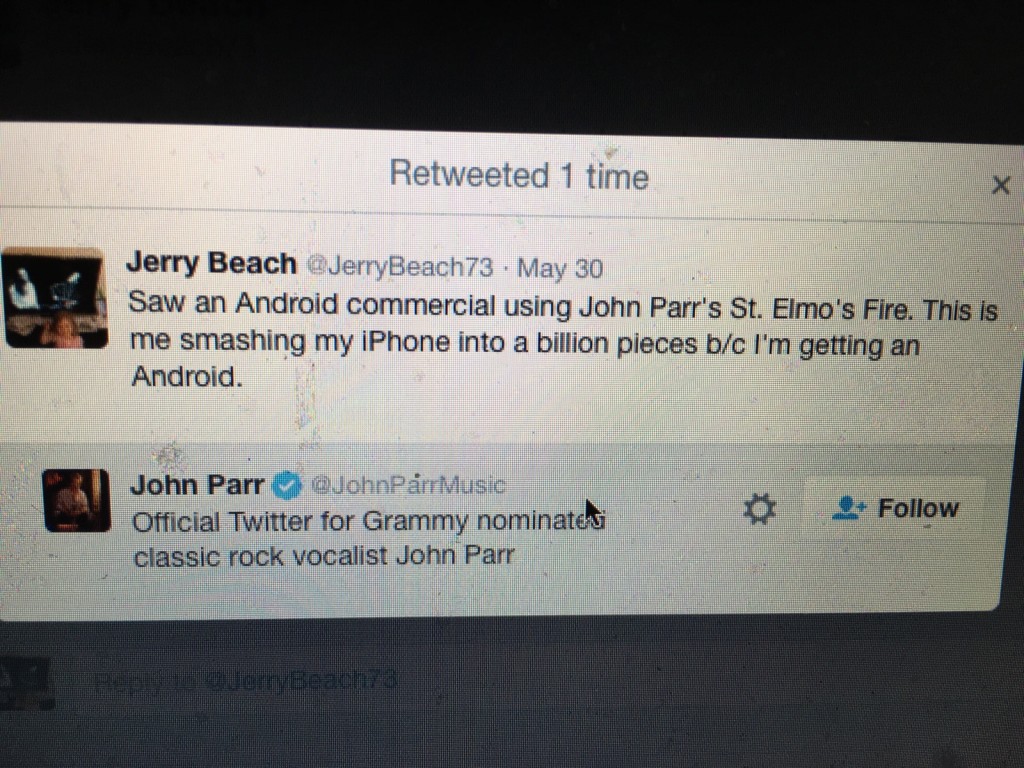