Can’t Stop the Music: The Village People Had a Movie?

Home » Can’t Stop the Music: The Village People Had a Movie? 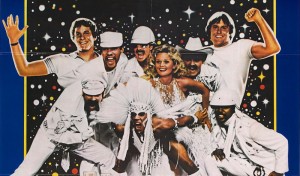 The theatrical trailer for The Village People movie Can’t Stop the Music  promised, “It’s the musical extravaganza that launches the 80s.” That outrages claim was actually an understatement.

Chances are that you’ve never seen or even heard of this movie from the summer of 1980. Well, there’s a good reason for that. It’s because it bombed at the box office bigger than Heaven’s Gate and Ishtar combined. At a price tag of a whopping twenty million dollars (huge at that time), it barely made two million of that money back.

The Reviews were Scathing

Oh, and the reviews were scathing too. Good ol’ Siskel and Ebert selected the film as one of their “dogs of the year” on their show, Sneak Previews. Variety magazine wrote, “The Village People, along with ex-Olympic decathlon champion Bruce Jenner, have a long way to go in the acting stakes.” Can’t Stop the Music became notorious for being the first winner of the Worst Picture Golden Raspberry Award. However, in all fairness, Golden Raspberry Awards founder, John Wilson, later listed the movie in his book, The Official Razzie Movie Guide, as one of “The 100 Most Enjoyably Bad Movies Ever Made.” And enjoyable it is.

Why is this Train Wreck of a Movie Fun to Watch?

You are probably asking yourselves this question. Why is this train wreck of a movie fun to watch? I’ll tell you why. Can’t stop the Music is a spectacle to behold—from the splashy, flamboyant sets to the gaudy, outrageous costumes. The rousing, uproarious music is splendid too; that is if you enjoy disco and the Village People. It will have you bopping your head and dancing in your seat throughout the movie. In addition, as the above review stated, Bruce Jenner stars in the film. Now that, my friends, is worth the price of admission alone.

To call Bruce Jenner’s acting bad is like calling the Grand Canyon a small hole in the ground. But, God bless him, he was giving it the old college try. Also chewing up the scenery, right along with Bruce, are Valerie Perrine and Steve Guttenberg. Remember when Steve Guttenberg was a big movie star? (What were we smoking?) I’ve always found Guttenberg annoying, so my review of his performance might be a tad biased. However, I love Valerie Perrine. You remember her; she was Miss Teschmacher in the 70s/80s Superman movies. Yeah, that Valerie Perrine. In this film, she plays an ex-supermodel turned Village People whisperer. To her credit, the diva looks fabulous throughout the film, from her perfectly coifed hair to her ravishing costumes.

The plot…the plot…the plot? Well, this is what one can discern from watching the movie. It is the fictional account of how the Village People got their first record deal, with the help of fashion model Samantha Simpson (Perrine) and her roommate, songwriter Jack Morrell (Guttenberg). The two search NYC for the perfect group to record Morell’s demo song. On this daunting quest, they literally pick up group members off the streets of New York: a police officer, a cowboy, a construction worker, a soldier, an Indian and a biker. Bruce Jenner’s character fits in there somehow, in his short shorts and tight cut-off t-shirts. (What would Caitlyn say?)

As the “plot” develops, problems arise when the advertisers become uneasy of the new group’s “flaming” image. That’s your mandatory story conflict right there. However, true to movie musicals, it all works out in the end, of course. The Village People become twinkling stars. 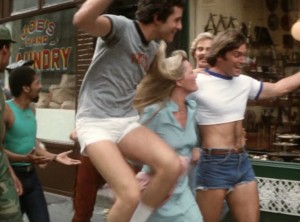 The Gayest Movie Ever Made?

The lavish production numbers in Can’t stop the Music are overproduced, campy and fierce at the same time. You have all your favorite Village People hits in this movie, from “Milkshake” to the title song, “Can’t stop the Music.” Then there’s the “YMCA” production number. Wow! That sequence alone made this the gayest movie ever made in its time—but gay in a fabulous way. Words cannot do justice to this musical number. You have to see it to believe it.

The Film was Directed by Rhoda Morgenstern’s Mom

On a curious note, the film was directed by Rhoda Morgenstern’s mom, a.k.a the Bounty paper towel commercial lady. Her name was Nancy Walker. Aside from having perfect comedy timing, Miss Walker enjoyed an illustrious career as an actress in theatre, film and television. This led to numerous Tony, Golden Globe and Emmy nominations. Can’t Stop the Music was to be the first—and last—big screen film she directed. Allan Carr, who produced Grease, is credited as a co-writer of the film, as well as producer. If you’re keeping score, this is the third Allan Carr movie that I’ve written about for this blog. The other two were “Grease 2: A Guilty Pleasure” and “Remembering an 80s Movie Nobody Remembers: Where the Boys Are 84.” I don’t know why, but it’s kind of scary.

It was a more innocent time

But seriously, folks. Can’t Stop The Music takes us back to a more innocent and happy time. 1980. Before HIV/AIDS reared its ugly head and devastated the gay community. More and more, closet doors were ever-so-slowly opening. The hope of acceptance and tolerance for the not yet christened LGBTQ people was blossoming. It was a time of joy and celebration. That is precisely what Can’t Stop The Music is about; a celebration of life, friends, and music. Its message is that you can let your freak flag fly… and it’s okay. Now that’s a great message for any movie.

If you have never experienced Can’t Stop the Music, buy it, invite your friends over, and make a party night of it. And always remember: you can’t stop the music; nobody can stop the music.

Trust me, watch this original trailer for the movie. You’ll be glad you did.