Ah, the 80’s… The era of big hair, primitive video games, and New Wave music. As lovers of anything 80’s, we’re very proud of the fact that the decade yielded such an influential genre of music.

So as a tribute to New Wave artists (and the scores of current Indie artists who were inspired by them), let’s explore the top 5 New Wave Albums of the decade.

5. Depeche Mode – Music for the Masses

Depeche Mode was always a cross between rebellious punk and sexy synth pop. In “Music For the Masses,” the band embraced their synth side in order to appeal to the mainstream public. And hey, they succeeded! The album sold millions of copies around the world when it was released in 1987.

The band’s punchy beats and big keyboard sound made for some radio-friendly hits. That said, the melodramatic nature of songs such as “To Have And To Hold” gave the album some sophisticated intrigue.

The album is defined by its vocal dynamic, led by David Gahan’s deep, strangely haunting voice. A backup choir in “sacred And Pimpf” adds a mellow layer to the theme.

4. Tears For Fears – Songs From The Big Chair

You have to be a true 80’s fan to fully appreciate Tears For Fears. Their iconic offering “Songs From The Big Chair” is no exception.

The album spawned songs like “Everybody Wants To Rule The world” And “Shout,” with song after song featuring choruses large enough to fill arenas.

Their emphasis on intricate guitar riffs put Tears For Fears on the borderline of Prog Rock. But the guitars blended in with the rhythmic Goth synths and offered up the sound of the decade.

The Talking Heads’ Career was rather short, but it was influential nonetheless. Most of the band’s influence comes in the form of gutsy experimentation and abstract rock art.

The album “Remain In Light” is especially experimental, since it is founded on the polyrhythms of Afrobeat. A rhythmic style of music founded in African tribal cultures, Afrobeat is a trance-like staccato that makes listeners want to break out in a dance.

In the case of The Talking Heads’ second album, guitars and drums take turns keeping a wild rhythm. The songs on this album are more instrumental than they are melodic, despite the fact that each one features vocals.

2. The Cure – The Head on the Door: An Honorary Best of the New Wave Albums

For a while, The Cure couldn’t decide if it was a pure punk band or a New Wave trailblazer. With “In Between Days” and several other tracks, however, the New Wave sound was a key theme of their 6th album.

This 1985 album set the limits for alternative rock as well as New Wave. While guitars and steady beats were a central characteristic of each track, the record is a smorgasbord of genres.

From a piano tune (“Six Different Ways”) to the Flamenco-inspired “The Blood,” to “Kyoto Song” with its oriental loop, The Cure takes a New Wave trip around the world. This paved the way for future Indie artists who would rather experiment with their music instead of being locked into a genre.

After the tragic death of Joy Division’s Ian Curtis, the rest of the band picked up its shattered pieces and reshaped them into New Order. “Power, Corruption, and Lies” was New Order’s ambitious 1983 debut. With a brand-new frontman and an emphasis on the decade’s signature synths, New Order put its mark on New Wave music.

The melodies of this album are forgiving and friendly to a mainstream audience. The peppy keyboards blend in well with them. However, the instrumental dynamics coupled with poetic lyrics give the entire album a sure post-punk element.

New Wave is the type of genre that grazes past your ears your entire life without you knowing about its complexities. Now that you’re familiar with a chunk of the history, are you ready to throw on some New Wave albums and give them a listen?

Let us know which band or album is an icon of the ’80s in your opinion. 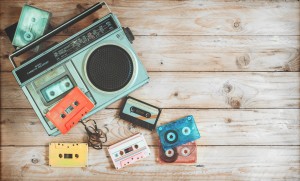