Funky 80s Hairstyles: Back and Bigger Than Ever

Update: Oct 25, 2009 – We ran across this great blog post, “That 80’s Hair!” chock full of 80s-inspired hairstyles (with pictures) as they appear from designers and in magazines now. These give a great perspective on how we are re-inventing the looks of 80s hairstyles. Time to get back out the crimping iron! 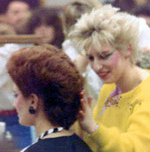 For those of us who were there, 80s hairstyles make us cringe with embarrassment. For those who weren’t, well, you can stop laughing now. What was it that caused us to wear our funky 80s hairstyles like a badge of honor? From the bangs that reached for the heavens with frizzy passion, to the extremely asymmetrical new wave social hair statement, to the funky side ponytails walking hair-in-hair with the mullets, hairstyles in the 1980s were about excess, experimentation, and enough hairspray to protect our heads when the Russians dropped the bomb.

But rumor has it, 1980s hairstyles are making a return to the fashion scene – with a vengeance. So lighten up, Frances. Take a look at these eighties hairstyles and find the one that’s right for you. Bone straight hair is so aughts. Wave, bobs and more altitude than we’ve seen in a while are all reminiscent of the days of big hair. Enjoy our rundown of the essentials of 80s hair below.

Now’s the time to break out your old yearbooks (or your parents’ yearbooks) and find that girl – you know, the popular one who had the most jelly bracelets and the complete set of Poison albums – and make her big 80s hairstyle yours. You know, the one that drove the bitchin’ camero. The monstrous hair that made all of the girls jealous, as she walked around in her skintight Gloria Vanderbilts, Chic or Jordache jeans with a hair pick tucked haughtily in the back pocket. Well, now that hair can be yours, and you won’t be a wannabe anymore. Survey says, by now her hair’s probably grody to the max. Check out the 80s yearbook pictures for a glimpse of the big hair that was.

This look was HUGE (sorry for the awful pun) at my high school. We were the very definition of big, nay, gargantuan hair. Bring on the Aqua Net baby, we’re going UP. >> 80s Big Hair t-shirt

Psych! New wave hair styles were the baddest of the bad, the predecessor to all that is goth today. Only the coolest and angriest people could pull off the “in-your-face, society” ‘do. And even now, there’s no such thing as too cool. New wave hair styles are catching on again like Michael Jackson’s head in a Pepsi commercial.

The asymmetrical aspect is obvious in these photos. While they are not of 80s hair, they are examples of the style on its way back — note Rhianna’s asym duo. Even the preppies got in on this hair style back in the 80s. In the preppy version, the hair style overall would be otherwise completely normal, but one side would be markedly shorter than the other.

The Side Ponytail: Only In My Dreams, Debbie Gibson.

Bubblegum pop and valley girl mallrats popularized this 80s hairstyle to epic proportions. They were most gnarly, though, when you broke out the crimper for a little pizzaz and added a new frizzy friend to the side of your head. Fer Shur. Whether you’re crimped (if you don’t have your crimping iron anymore, fear not, you can get one new from the links to the right) or straight, when you’re ready to try this 80s hairstyle, remember, it’s not tight enough until one of your eyes squints to half the size. Learn more about the Side Ponytail here!

The 80s side ponytail has even been rocked by Deb (Tina Majorino) in the very funny movie, Napoleon Dynamite, and most recently by Jennifer Lopez at the Nickelodeon Kid’s Choice Awards.

The Rodent or Water Fowl.

Back in the 80s, ne’er a day went by when a little urchin didn’t cross your path with either a rat tail or a duck tail. You always knew the kids to avoid based on how long their extra little hair appendages were. And if a guy with a mullet or a gal with long frizzy hair had a rat tail snaking out the bottom of their already extensive locks, there’s one thing you could assume immediately: They were hardcore, dedicated to the 80s, to the max.

So while 1980s hair styles may be gone, they’re not forgotten. Don’t be a McFly and miss the boat the second time around. Call your hairdresser today, stock up on the Aquanet hairspray and Dippity-do, and let the party commence, retro-style. Bill and Ted said it best: “Our journey through time has taken a most excellent turn!”