Who can forget this famous television voice over? “In 1972 a crack commando unit was sent to prison by a military court for a crime they didn’t commit. These men promptly escaped from a maximum security stockade to the Los Angeles underground. Today, still wanted by the government, they survive as soldiers of fortune. If you have a problem, if no one else can help, and if you can find them, maybe you can hire: THE A-TEAM.” 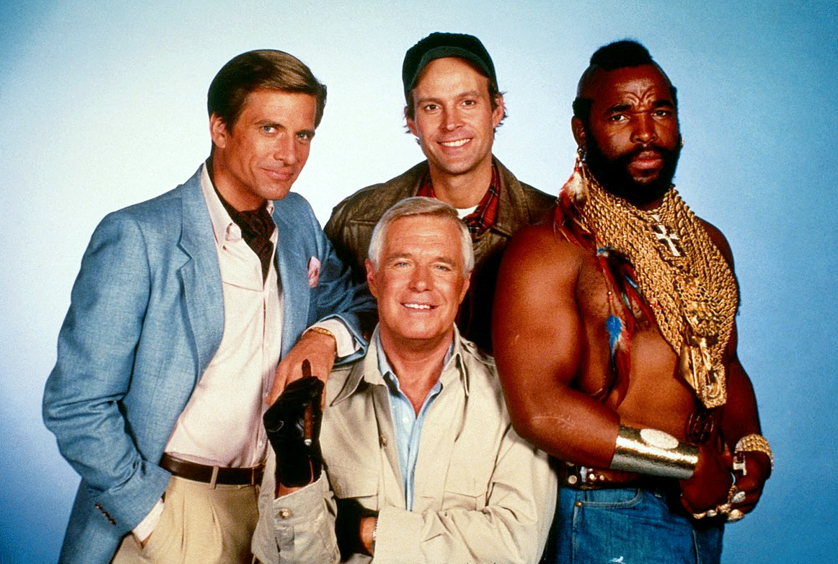 NBC’s made for television hit action/adventure series The A-Team debuted on January 23, 1983. Known for its clean “TV appropriate” violence, entertaining action scenes and peppering of comic relief, the show was about a group of ex-U.S. Army Commandos on the run from the military. Every week for four seasons, fans watched the show’s characters John “Hannibal” Smith (the team’s ringleader), Templeton “Face” Peck, B.A. Baracus (played by 80’s star Mr. T), and Howling Mad Murdock fight for the underdog, while avoiding capture by the military.

During The A-Team’s last season, however, creators changed the shows premise in the hopes of boosting ratings. Many fans may not remember, but in the final season the team is finally apprehended by the military. Forced to decide between either returning to prison and execution or working for a government agency performing secret missions, the team opts to work for the government.

Mr. T, an actor known for his immense collection of bling and his trademark Mohawk haircut, remains an icon of 80’s television. The impact of The A-Team has such staying power that even 20 years after first airing, cable stations such as Sleuth and TV Land broadcast reruns of The A-Team for fans around the world. The current resurgence in all things 80s as they relate to TV and movies has brought about a new A-Team movie set to release Summer of 2010. With stars like Liam Neeson and Bradley Cooper, this is certainly a must see. Although, I will personally miss Mr. T.

Watch the trailer for the new movie below.