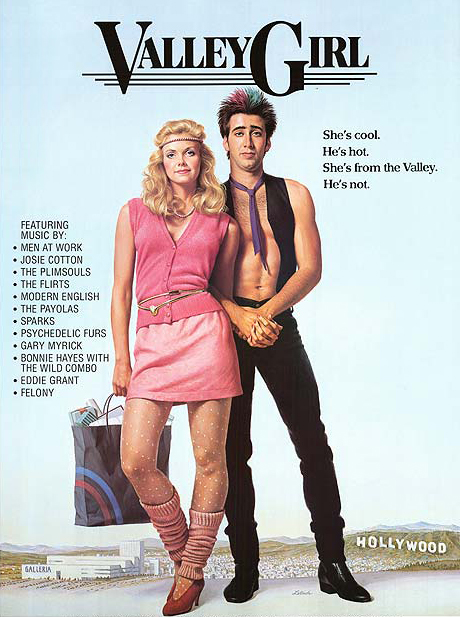 This is THE teen movie of the 80s and it stands firmly in the #1 slot at Like Totally 80s. It stands out in part because it was not done by John Hughes and therefore has a completely different feel and a refreshingly different cast from the other brat pack movies of the time. In fact, Valley Girl is the first starring role for Nicolas Cage (Randy) (reason enough to watch and enjoy this movie). His co-star, Deborah Foreman, plays Julie Richman, a girl from the valley that falls for a punk guy from Hollywood (Randy). Their friends don’t understand (hers mostly) and she struggles to fit in while still seeing Randy. This aspect of the plot has a Romeo & Juliet feel, only valley-style fur sure. Julie and Randy’s eyes meet for the first time on the beach where clothes and styles are not present to define who they are, where they are from, or what group they belong to. They see each other and connect. They then run into each other later that night at a Val party that Randy and his friend Fred decide the crash. Randy and Fred get kicked out of the party mostly due to jealousy from Julie’s ex-boyfriend (Tommy, played by Michael Bowen) that she dumped earlier that day at the mall. “Like, I’m so not in love with you anymore, Tommy. It’s so boring.” (said while handing him back his ID bracelet – how 80s). Randy won’t be told “who he can score with” and goes back to the party, sneaking in an upstairs bathroom window and waiting in the shower until Julie finally comes in to use the bathroom. He convinces her to leave the party with him and thus begins their first date – a trip into “Holly-weird” complete with live music by the Plimsouls. They fall for each other and their relationship develops largely during a movie montage set to the very awesome Modern English song, “I Melt With You.” However, the pressure from her friends finally becomes too much and she dumps Randy to go back with Tommy. The rest of the movie consists of Randy trying to win her back and culminates (80s teen movie style) in his getting the girl and the better of Tommy at the prom. The dialogue, accents, clothes and music in this film are dead on. Toss in the really sweet story and interesting sub-plots (the competition between Suzie and her mom for hunky Skip) and you have all the makings of a classic. The language is a time capsule for the valley girl language and speech patterns: “He’s, like, soooo bitchin’,” and “like, he’s got the bod, but his brains are bad news.” The opening scene has the four girls shopping at the Sherman Oaks Galleria – this is a great way to see the fashion trends in 1983: piano keys tops, saddle oxfords shoes, patent leather pumps, colored and layered bracelets. http://youtu.be/DHtbrlPI07E And, the music. Valley Girl has a great (or should we say bitchin’) soundtrack. Although, the soundtrack was not created originally with the movie; it was released much later than the movie in response to demand. Below is a sampling of the songs in the movie. This mix is available as the unofficial soundtrack done by Rhino records. One obvious omission from this list is Eddy Grant’s Electric Avenue (played during the party at Suzie’s house where Randy and Julie first meet).

Buy Valley Girl: Music From The Soundtrack Also be sure to check out the “Valley Girl” song by Frank Zappa