1988 was a politically active year with indictments handed down in the Iran-Contra affair, a presidential election in which George HW Bush beats out Michael Dukakis, and the election of Sonny Bono as the new mayor of Palm Springs. To escape the politics and the natural and manmade disasters, people flocked to the movies to see some great cinema. This was the year of Rainman, Coming to America, Die Hard, Beetlejuice, and A Fish Called Wanda. At the Oscars that year, The Last Emperor won an astounding 9 Academy Awards (what!?!). On the music scene, Rick Astley released “Never Gonna Give Up” allowing future generations to Rick Roll (not sure if that goes in the good or bad category), and George Michael convinced us that we had to have “Faith.” We all wished Michael Hutchence was talking to us personally when he sang “Need You Tonight” and Guns N Roses hit it huge with “Sweet Child O’ Mine.” Both Roseanne and The Wonder Years hit the small screen. The Winter Olympics were in Calgary, and the Redskins won Super Bowl XXII. Whatever 1988 brought us both good and bad, we heeded the advice of Bobby McFerrin – Don’t Worry, Be Happy. 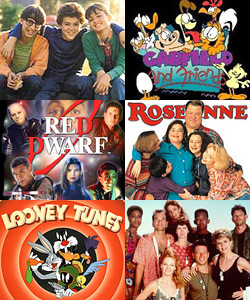 The Wonder Years
Starring: Fred Savage, Jason Hervey, Alley Mills, Josh Saviano, Danica McKellar, & Olivia d’Abo
An adult Kevin Arnold reminisces on his teenage years spent growing up during the 60’s. As he goes from adolescence to adulthood, he experiences, along with his best friend Paul and sometimes-girlfriend Winnie, the full range of trials and traumas that come in just about everyone’s life.

Mystery Science Theater 3000
Starring: Joel Hodgson
When zany mad scientist Dr. Clayton Forrester and his loopy assistant Frank get bored with their work at the Deep Thirteen research center, they kidnap Joel the janitor and shoot him into orbit on the Satellite of Love. While in space Joel builds wacky robot sidekicks Tom Servo and Crow T. Robot to help him withstand an onslaught of grade ‘Z’ movies that the mad scientists force him to watch.

China Beach
Starring:  Dana Delany, Concetta Tomei, Marg Helgenberger, Michael Boatman, Robert Picardo, Brian Wimmer, Jeff Kober, & Nancy Giles
A drama series set at an American base during the Vietnam War that looked at the everyday lives of the people sent to serve their country. The doctors, nurses, soldiers and even USO entertainers stationed at the base must try to come to terms with the horrors and stresses of the war around them. Not all of them succeed.

Garfield & Friends [cartoon]
Animated television series based on the popular comic strip. Each show is divided into stories about Garfield, Odie, Jon and the trouble they get into, or Orson the Pig and his adventures on a farm with fellow farm animals Wade Duck, Roy Rooster, Bo and Lanolin the sheep, Booker the chick and Sheldon, an unhatched egg.

Red Dwarf
Starring: Craig Charles, Danny John-Jules, Chris barrie, & Robert Llewellyn
Three million years ago, a radiation leak killed the crew of the mining ship, Red Dwarf. The only survivor was Dave Lister, the chicken soup machine repairman. He spends his time on the ship with a holographic projection of Arnold Rimmer (his dead bunkmate), Cat (a life-form that evolved from Dave’s cat), Holly (the ship’s senile computer), and Kryten (a service mechanoid).

Rain Man
Starring: Dustin Hoffman & Tom Cruise
Selfish yuppie Charlie Babbitt’s father dies and leaves a fortune to Raymond, the institutionalized savant brother that Charlie didn’t know he had. They set out on a cross-country journey of discovery.

Who Framed Roger Rabbit
Starring: Bob Hoskins, Christopher Lloyd, Charles Fleischer, & Joanna Cassidy
A toon hating detective is a cartoon rabbit’s only hope to prove his innocence when he is accused of murder.

Coming to America
Starring: Eddie Murphy & Arsenio Hall
It is the 21st birthday of Prince Akeem of Zamunda and he is to marry a woman he never saw before. Now the prince breaks with tradition and travels to America to look for the love of his life.

Big
Starring: Tom Hanks
When a boy wishes to be big at a magic wish machine, he wakes up the next morning and finds himself in an adult body literally overnight.

Twins
Starring: Arnold Schwarzenegger & Danny DeVito
A physically perfect, but innocent, man goes in search of his twin brother, who is a short small-time crook.

The Naked Gun: From the Files of Police Squad!
Starring: Leslie Nielsen
Incompetent cop Frank Drebbin has to foil an attempt to assassinate Queen Elizabeth II.

Working Girl
Starring: Harrison Ford, Sigourney Weaver, & Melanie Griffith
When a secretary’s idea is stolen by her boss, she seizes an opportunity to steal it back by pretending she has her boss’s job.

Willow
Starring: Val Kilmer, Warwick Davis, Joanne Whalley, & Jean Marsh
In the dungeons of the castle of the evil Queen-sorceress Bavmorda, a prisoner gives birth to a child who, according to an ancient prophecy, will put an end to the reign of the Queen. A midwife saves the child from the wrath of Bavmorda, but is forced to throw her cradle in a river when reached by the Hounds of the Queen. The river brings the child near a village of nelwyns, and little Willow finds and adopts her. When the Hounds reach the village, Willow begins a difficult journey to bring the baby back to her people and to fulfill the prophecy.

Oliver & Company
A homeless kitten named Oliver, roams the streets of New York, where he is taken in by a gang of homeless mutts who survive by stealing from others. During one of these criminal acts, Oliver meets a wealthy young girl named Jenny Foxworth. This meeting will forever change his life.

Bull Durham
Starring: Kevin Costner, Susan Sarandon & Tim Robbins
A fan who has an affair with one minor-league baseball player each season meets an up-and-coming pitcher and the experienced catcher assigned to him.

The Land Before Time
Four orphan dinosaurs (Littlefoot, Petrie, Ducky & Cera) travel the ruins of their world, while grieving the loss of their families and banding together to face the odds of survival.

Young Guns
Starring: Emilio Estevez, Kiefer Sutherland, Lou Diamond Phillips, Charlie Sheen, Dermot Mulroney & Casey Siemaszko
A group of young gunmen, led by Billy the Kid, become deputies to avenge the murder of the rancher who became their benefactor. But when Billy takes their authority too far, they become the hunted.

Dirty Rotten Scoundrels
Starring: Steve Martin & Michael Caine
Lawrence and Freddie are con-men; big-time and small time respectively. They unsuccessfully attempt to work together only to find that this town (on the French Mediterranean coast) aint big enough for the two of them. They agree to a “loser leaves” bet. The bet brings out the best and worst in the two.

The Great Outdoors
Starring: Dany Aykroyd & John Candy
A Chicago man’s hope for a peaceful family vacation in the woods is shattered when the annoying in-laws drop in.

Tequilla Sunrise
Starring: Mel Gibson, Michelle Pfeiffer, & Kurt Russell
A business on the line. A friendship on the edge. A woman caught in the middle.

Child’s Play
When serial killer Charles Lee Ray is mortally wounded in a police shoot-out, he uses a voodoo spell to transfer his soul into Chucky, a “Good Guys” doll. Andy receives the doll as a birthday gift, and Chucky soon resumes his killing spree. However, Charles doesn’t want to be trapped in the body of a doll forever. His only escape would be to transfer into the first human he revealed his true identity to . . . which places Andy in mortal danger.

The Accidental Tourist
Starring: William Hurt, Kathleen Turner, & Geena Davis
Macon Leary is the author of a travel book for people who want to travel with the minimum fuss and as little impact as possible on their lives. Arriving back from a working trip, his wife announces she can no longer deal with the fact that he is dealing with the death of their son the same way that he travels: with minimum impact. Macon subsequently meets the quirky Muriel, who it seems is just the opposite to Macon.

The Accused
Starring: Kelly McGillis & Jodie Foster
A rape victim, enraged at the light sentence her attackers received on account that she was of “questionable character” goads a female prosecutor to charge the men who literally cheered the attack on.

Funny Farm
Starring: Chevy Chase & Madolyn Smith Osborne
Andy and Elizabeth are sick of life in the city, and decide to move to the country. Buying a home near a picturesque town, they soon discover (to their horror) that things are done differently in the country. They must deal with all of the local characters, the local animals, as well as any skeletons in the closet.

Alien Nation
Starring: James Caan, Mandy Patinkin, & Terence Stamp
A few years from now, Earth will have the first contact with an alien civilisation. These aliens, known as Newcomers, slowly begin to be integrated into human society after years of quarantine but are victims of a new type of discrimination. When the first Newcomer police officer, Sam Francisco is assigned his new partner, he is given Matthew Sykes , a mildly racist veteran, the animosity between them soon gives way to respect as they investigate the Newcomer underworld, and especially Newcomer leader William Harcourt.

Gorillas in the Mist
Starring: Sigourney Weaver
The story of Dian Fossey, a scientist who came to Africa to study the vanishing mountain gorillas, and later fought to protect them.

License to Drive
Starring: Corey Haim, Corey Feldman, & Heather Graham
A teen decides to go for a night on the town with his friends despite flunking his driver’s test.

Short Circuit 2
Starring: Fisher Stevens, Michael McKean, & Cythia Gibb
When Number Five is sent from Newton and Stephanie’s ranch to the big city to help Ben with his electronics business, he finds that his robotic talents are wanted by city low-life who want to turn Number Five into profits.

Married to the Mob
Starring: Michelle Pfieffer, Matthew Modeine, & Dean Stockwell
Angela deMarco is unhappily married to high Mafia member Frank deMarco. When Frank is killed, Angela takes the opportunity to break free of the Mafia world entirely and start a new life. But Frank’s boss, Tony Russo, begins to court the unresponsive Angela. The FBI begins surveillance on her, thinking her to be his new mistress. FBI agent Mike Downey goes undercover as Angela’s neighbor, but soon finds himself attracted to Angela himself.