By Ryan Zimmerman I sat down the other day with my 2 toddler daughters and found myself lucky enough to stumble upon The Goonies on Encore. We were fresh off an appreciated viewing of Indiana Jones and the Temple of Doom (thanks to Lego Indiana Jones on Wii), and knowing that Short Round was such a huge hit in Temple of Doom, I knew the same actor who stars as Data in The Goonies was enough to lure them into another 80s classic. Sure enough it was. Once I cuddled up with them on the couch, explained a bit about the movie, and let it slip that Short Round appeared in this movie as well, they were hooked. 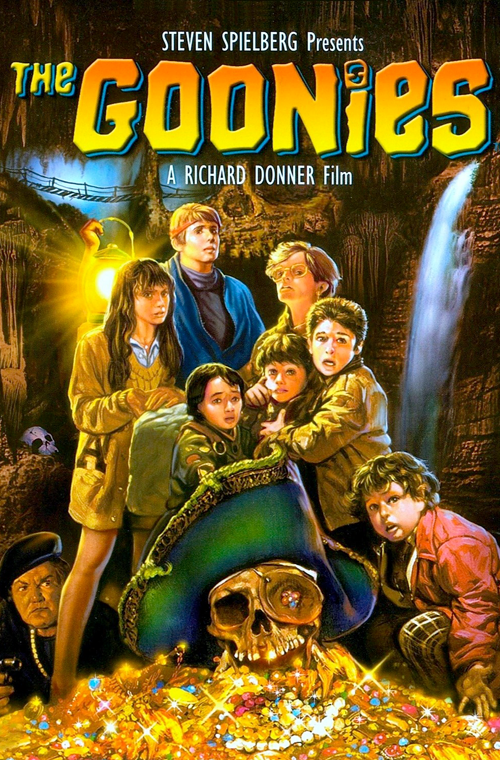 The movie starts off with the Fratellis, a mother and 2 sons (well 3, but we’ll get to him later), as they successfully conduct a jailbreak and bust out one of the boys – Jake Fratelli (Robert Davi) – from the pen. Then the opening credits scroll through, as we see each Goonie, (a name given to the juvenile inhabitants of the “Goon Docks”, a portion of the town of Astoria, Oregon) one by one. Mikey (Sean Astin) is the leader of the group who is hell-bent on finding what lies at the end of the treasure map discovered in the attic. He convinces his Goonie friends to head off in search of One Eyed Willie’s gold, in hopes of using the long lost pirate loot to save his beloved home from demolition. The rest of the Goonie crew agree to help and go with him to discover the riches. Mouth (Corey Feldman), donned in a Purple Rain tee and a Members Only jacket, Data (the aforementioned artist formerly known as “Short Round”), and Chunk (Jeff Cohen), the lovable, huggable, truffle shuffleable, round out the remaining Goonies. 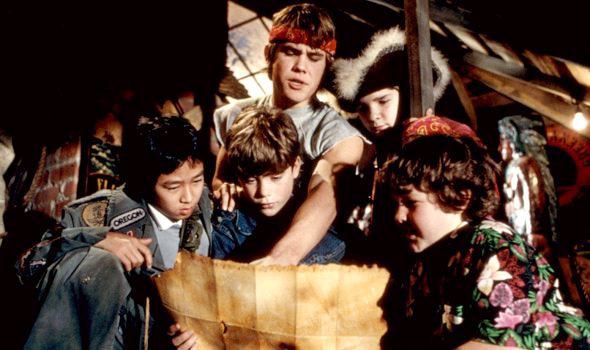 The foursome are joined up, reluctantly, by Mikey’s older brother Brand (Josh Brolin), Andy (Kerri Green) the sweet head cheerleader, and Stef (Martha Plimpton) the big glasses wearing buddy of Andy. They find themselves underground and heading down the trail to Willie’s treasures. In hot pursuit are the Fratellis, who are informed of the Goonies’ adventure by the captured Chunk who spills the beans to avoid having his meaty arms pureed in a blender. Left behind, Chunk befriends the 3rd Fratelli, a malformed and disfigured “It” named Sloth (former football player John Matusak) over food — “RUTH! RUTH! BABY! RUTH!” Together, this odd couple decides to carry on and meet up with the rest of the gang. 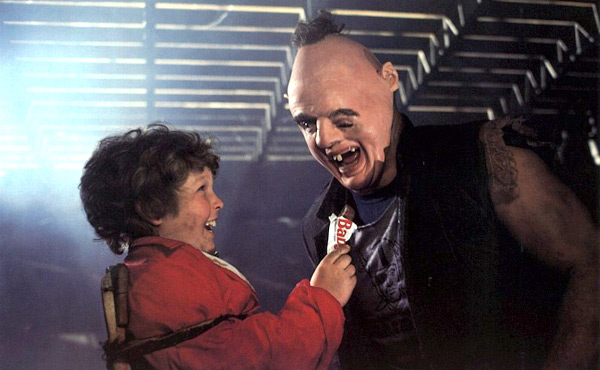 After some close calls (Willie left booby traps to prevent looters), Mikey and crew eventually find Willie’s ship, but unfortunately the Fratellis appear and confiscate the gold. Thankfully Sloth and Chunk — “HEY YOU GUYYYYSSSSS!!!” — arrive just in time, coming to the group’s rescue and helping them escape from the cave . . . regrettably without any of the One Eye Willie’s bullion or jewels. 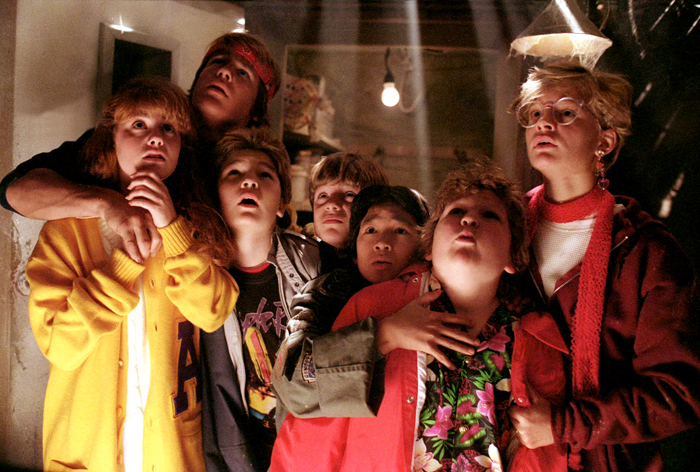 Now, I won’t ruin the ending, because if you have yet to see this movie, you HAVE TO DO SO! To be a true child of the 80s, The Goonies is a must watch. It made me want to form a group with my friends and live out that fantasy life. The sheer excitement of just imagining what it would be like to find a map with my friends and go on a great adventure like the Goonies had, made this movie hit close to home. It allowed each and every kid that watched it to live vicariously through Mikey and the gang. To see what it would be like to live that dream that so many kids dream. I am happy to say my kids watched the movie and experience the same feelings I had at their age.