Interview with “A Line Through the Desert” author William Stroock

Home » Interview with “A Line Through the Desert” author William Stroock 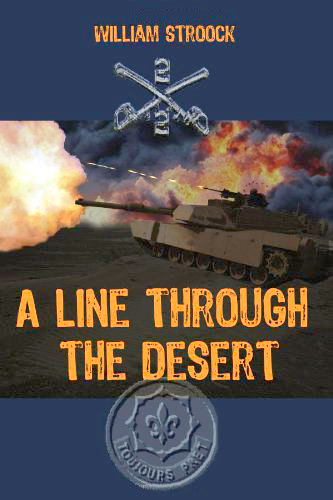 “A Line through the Desert” is a Gen X story of love set among the realities of the first Gulf War. William Stroock does an excellent job of evoking the feeling of being there in the desert and of being adrift and unsure like every post-high school person must feel regardless of time and place. The late 80s cultural references will be very familiar to anyone coming of age during this time. We had a chance to ask Will some questions about the book and his future plans. 1. Tell us about yourself: What do you do? Where are you from? I live in Brigdewater, NJ with my wife, Jenica and two daughters Meriam and Lillianna. In addition to teaching history at Raritan Valley Community College I write history articles for various magazines. I have also been a high school substitute teacher and a full time middle school teacher. 2. Tell us a little about your inspiration in writing this book. The idea for A Line through the Desert had been rolling around my head for a while. I began writing in March of 2003 after I had finished reading Nick Hornby’s High Fidelity. He just flipped the on switch in my brain for some reason. It combined a good love story, Gen X culture, and an under appreciated war all in one. I came of age reading Tom Clancy novels so I understood the importance of getting the technical details as right as possible. I interviewed a couple dozen veterans of the Second Armored Cavalry Regiment, the unit in A Line through the Desert. Couldn’t have done it without them. 3. Did you serve in the Gulf War? Nope. I was 17 when the war broke out. 4. The love story between Jake and Patricia was so real. Did you pull from your own experiences in developing their story? You bet I did. The block I describe in A Line through the Desert is the block I grew up on. All the characters are real (I had to cut one out for reasons of space, sorry Antoine), especially Patricia, and no, I never snuck into her bedroom, though myself and the Devon character did break into her house when she was a having a slumber party. There was a little fling but that never amounted to much. Basically I had been chasing this girl since I was 12 but she never really cared. I am still in touch with everyone. 5. We love all the late 80s music and movie references in the book! What were your 80s favorites in both movies and music? Well, metal all the way, lots of Zeppelin and Def Leppard, Guns n Roses, Metallica, I think Somewhere in Time is Iron Maiden’s best album. Later on classic rock, all the music Sgt. Bloom likes in A Line through the Desert. As far as movies, we all remember the way HBO and Cinemax ran movies over an over. My favorites were Aliens, the Lethal Weapon series, Die Hard, Robin Hood, Stand by Me. God I loved Bachelor Party. I crammed “A Line Through the Desert” with as many 80’s pop culture references as I could. I wanted it to drip Gen X. I wanted readers to open it up and get punched in the face by 1988. 6. What are you working on now? Are there more books on the way? I am writing numerous magazine articles. I am also 35,000 words into my next novel, about a Captain in Burma in World War Two. I am also putting a short story compilation together about an alien invasion of earth-think Tom Clancy meets HG Wells; like Independence Day, only more so. > Purchase “A Line through the Desert: The First Gulf War”