The Modern English show, at The Nick in Birmingham, was a blast. The Nick Rocks is a small venue with serious rock n roll credentials and has hosted acts as diverse as Bono, Rob Thomas and Jack Black over its twenty year history. This is the kind of place that has Jager on tap. The band had just played a huge music festival to a crowd of thousands in Melbourne, Florida so this was a smaller, more intimate way to wrap up their tour of the Southeast. In my pre-show interview with Robbie Grey, the band’s frontman, he said that he likes touring the States because, “people know how to have a good time.” And have a good time we did.

The original band is re-formed and playing together for the first time in over 25 years. Their set list featured many of the songs off their first two albums, including “Someone’s Calling” (they opened with this one), “Hands Across the Sea,” “Move in Light,” “Swans on Glass,” “Sixteen Days,” “Life in the Gladhouse,” and of course, “I Melt With You.” 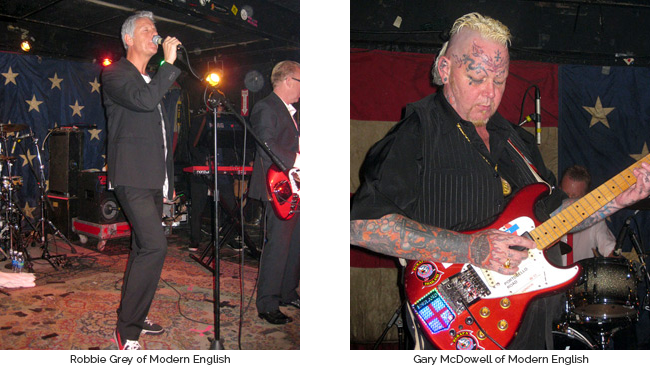 “I Melt With You” is one of my favorite songs, which goes hand-in-hand with my devotion to the movie Valley Girl. It won’t surprise anyone to learn that I am not alone in this. When the band broke into the intro of the song, everyone went crazy. I was torn between wanting to jump up and down (read, dance) with my eyes closed in the pleasant inner place that this song creates and wanting to keep my eyes open so that I could see Modern English performing this live not 3 feet in front of me. The only downside was that the song was over too quickly, and I wanted more. Happily, the band was having as much fun with it as the crowd and decided to play it again in the encore. And, again. During the third time they played the song, it turned more into an I-Melt-With-You-jam in 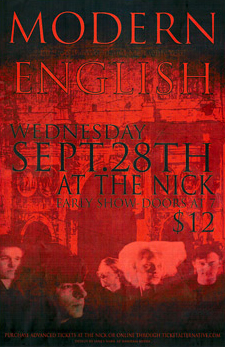 which they started to experiment with the music. At one point, it took on a reggae beat with Robbie Grey dancing reggae style on stage and encouraging the crowd to do the same. We were happy to. So. Much. Fun.

Then, if all that weren’t enough, and it would have been, Robbie handed the mike down into the crowd — to me — and, I got to sing part of the chorus of “I Melt With You.” He passed the mike to two other folks in the crowd as well before picking it back up himself for the big finish. When he took back the mike he joked that we all sang with English accents. Just try to sing that song without one. Doesn’t matter if you’re from Alabama, y’all.

After the show, the guys in the band went out to the parking lot and talked with fans, signed CDs, and hung out. Hands down, this was one of my favorite concert experiences. The great music, the intimate setting, the post-show access to the band, and the fact that I got to sing part of the chorus with Modern English made for serious fun. Oh me, oh my, that’s hard to beat.