We recently had the extreme pleasure of sitting down with Robbie Grey, frontman of Modern English, before the last show of their recent tour of the Southeast. 2012 will be a big year for Robbie with new music forthcoming and a wedding (he’s getting married for the first time to his girlfriend of nine years). We cover topics ranging from what in the world “mesh and lace” means to his feelings on being thought of as one-hit-wonder to new happenings with the band.

Modern English released their first album, Mesh and Lace, in 1981. It was in 1982, with the release of their follow up album, After the Snow, that things really took off when the second single from that album, “I Melt With You” got selected for the soundtrack of “Valley Girl.” We started the interview by talking about the new version of this classic 80s song, recorded for the upcoming movie (starring Rob Lowe and Jeremy Piven) of the same name. 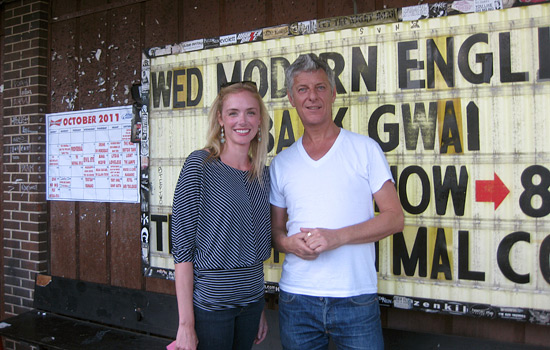 Alli of Like Totally 80s with Robbie Grey of Modern English

LT80s: I’ve been listening to the new version of “I Melt With You.” It’s such a departure from the original, and even from the 1990 version, which was pretty faithful to the original. How did that come about? The complete change, was it directed by the makers of the movie, or was this a take you always wanted to do for the song?

RG: It was really the mood of the movie that we decided to follow. It’s a pretty dark film. We are normally associated with teen films – “Valley Girl” stuff, but this is really quite a dark film. There’s a lot of sex, violence, and drugs in it. It’s basically about a group of men who meet up after the ‘80s.Their lives have all gone down different roads, and they’ve all come out the other side. They’re in their 40’s and 50’s, and they’re messed up basically. I met the director or the producer, Mark Pellington of Arlington Road and The Mothman Prophecies. He just said he wanted to use our music. He said he couldn’t afford to use the original track because it cost a lot of money to get that. We said we’d record a new version for him. As we started doing that, we decided to go down a different road with it and use violins and cellos, and just make it as moody as the film, really.

Listen to the new version here and download it for free: http://www.pledgemusic.com/widgets/1938

What we’re trying to do is get people to go to either the Modern English website, ModernEnglish.me, or to the Facebook Artist page where you can download the new version for free. What it does is it leaves you leaving your e-mail so we contact you next year when we’re going to record some new songs, and we can go directly to our fans and offer the songs to them, rather than go through record companies.

LT80s: Tell us about the new music. I saw on your website you’re going to have an album out next year.

RG: We’ve been writing. We haven’t got anything finished really. It’s only in its early stages, because everything’s so different now, and this is the first time the original band’s played together for a long, long time. The way you record and write songs is so much easier with music programs, technology, and computers. We don’t have to go into studios and spend lots of money like we used to. It’s a slow process, and it can go down any direction you want by having the programs. It just goes everywhere. It’s endless.

We haven’t got anything finished yet, but we’ve got ideas flying around. We’re going back to England next week, and we’ll write more then. We won’t have anything finished until next year, though. It’s going to take a while.

LT80s: Musically, what can we expect?

RG: It’s really hard to know, because we’re not sure yet. We’re still going to keep our upbeat sensibility of “I’ll Melt With You” and some stuff, but as we’re older, I suppose, we’re gonna sound probably a lot more mature as well. I don’t know how to explain it, really. There’re a lot of different directions that we’ve written in. We won’t really know what it’s going to be like until we get there.

I just think people should listen up for the new stuff. It will be good. We’re determined to make it really special, so when stuff does come out, we’ll probably do something like have an EP come out either through this company called PledgeMusic, through our website, or something like that. It will definitely be worth listening to, because we’re going to spend a lot of time putting it together.

LT80s: Shawn, one of our fans on Facebook, commented on how many versions of “Someone’s Calling” there are (his favorite of your songs). He wanted to know which version is your favorite.

RG: All right. That’s the first song we play tonight. Probably the 7” single. I think what’s different about now compared to back in the days was that you could have a 12”, 7”, and . . . vinyl we’re talking about here. You could have so many different versions of songs all on one EP. Now, you can have thousands of different versions of the song on a download. I think for “Someone’s Calling,” it’s probably the 7” single, which is where the bridges are halved. It’s more instant. We’re doing the LP version tonight, though.

LT80s: Of the seven albums that you’ve done, do you have a favorite?

RG: Yeah, I like Mesh and Lace, the first album — because we did it all ourselves. With After the Snow, Huge Jones produced us, so he took over the reins really, in a lot of ways. Mesh and Lace is just when we were really young and we didn’t know what we were doing, so it’s quite experimental.

It’s just when we were starting – things are exciting when you first start. You know what it’s like when you’re first branching into things. We left it in the album, and we just had a lot of experimentation on there; rattling film cans, and echoes on lots of different guitars. It’s quite an edgy album, and we’re doing quite a lot of Mesh and Lace on this tour. We’re doing “Move In Light” and “16 Days.” There’s quite a few tracks from that album we’re doing.

LT80s: How does it feel to be known for one song? Obviously, fans of Modern English know that there’s much more, but generally speaking, people know “I Melt With You.” How does that feel? Do you embrace that, or…?

RG: Totally embrace it. I don’t have a problem. It pays all my bills. When there’s been lean periods for Modern English, that’s still been there as a constant, and it’s really helped us to carry on really. At the moment, it’s in a Hershey bars advert on TV.

There’s a lot of money involved in those things. As you know, music is in trouble now. People don’t even buy CDs anymore, let alone records. Bands find it really hard to make money off downloads. There’s no money there for bands to have a living. The only way really, except if you’re a massive band like U2 or something, the way we make a living is by adverts and film soundtracks. That’s it really.

That’s been brilliant, because you can do so many things; Burger King advert, you name it, and not just in America but all over the world. That’s helped us carry on with making music, really.

LT80s: It’s been almost 25 years, right, since the original lineup of Modern English was together?

RG: Yeah, it’s amazing to look around and see these guys on stage again. It’s really special. We knew each other from kids from our hometown in Colchester and Essex in England. We were just 16 and 17 year old kids when we knew each other back then. To be seeing friends on stage at 50 is really special; it’s good. And there’s a real chemistry when we get together. There really is.

We don’t always see eye-to-eye about a lot of things. We’ve all got very different lives now, as well. One guy’s got married with a kid; Steve, the keyboard player. Gary lives in Thailand most of the year, and he’s single. Mick’s having a houseboat built in England. Everyone’s got different things going on, but when we get together and make the music, it really works. That’s probably the best thing I have to say about it, really.

LT80s: Alan Hunter, one of the original VJs on MTV, is from Birmingham and lives here in town. When I told him that I was going to be talking with you, he had his own question. He wanted to know if you’ve used any of the lines from “I Melt With You” in a bar on a gal. If so, did it work, or did she walk?

RG: Definitely not. I’m not that cheesy. I’ve never picked a girl up in my life. I don’t do that kind of thing.

LT80s: Finally, I have always wondered what “Mesh and Lace” means. It is the title of your first album as well as a song on that album, and then it reappears, of course, in the lyrics of “I Melt With You.”

RG: Bloody hell, it just means white and black, good and bad – all that.

When I asked about future tour plans, Robbie said, “Next year we’ll come back. We’ve got work permits until next September, so we can come anytime we want. We always like playing over here [America], because people know how to have a good time.” Indeed.

Thanks so much, Robbie, for taking the time to talk with us. The show was so much fun, and we can’t wait to hear the new music Modern English has in the works. As soon as any information is available about their upcoming release, we’ll share it here. In the meantime, keep up with the band on their site www.modernenglish.me and on Facebook.