Was Jake Ryan a Jerk?

Home » Was Jake Ryan a Jerk? 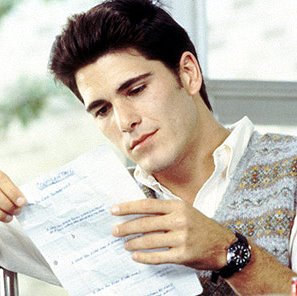 After rewatching “Sixteen Candles” over the weekend, I am left wondering if, despite his insane hunkiness and desirability, Jake Ryan was actually a jerk-in-dreamboat-clothing (never has a sweater vest looked so good). Wait—before you revolt on me, hear me out.

I get it that Caroline was not enough for him. She was vacuous, uninteresting, and reckless. If you’re a serious guy looking for something more real in a relationship, she ain’t it. No problem there. But, was his treatment of her the night of the dance and after-party justified, or was he just being a jerk?

He went to the dance with Caroline knowing that his interests had shifted. I’ll give him a pass there. He didn’t know where things were headed with Samantha, if anywhere, and he hadn’t had enough time to commit to a full break up yet (even if he knew that’s where it was headed). But, his behavior after leaving the dance takes an uglier turn.

Sure, she invited half the school to his house to trash it. Sure, she was so wasted that she was incoherent and irritating. But, when she sought him out in his bedroom, slamming the door on her (so he could continue to try to get in touch with another girl in peace) seemed a little cruel. That she ended up with her hair stuck in the door made it all the worse (although we can assume he didn’t know that had happened). But, following up the door slam with turning her over to a complete stranger to do what he would with her really has no excuse. If the appeals of her bitchin’ bod no longer outweighed her frivolousness and her disrespect for his property, then dump her. Problem solved. But, sending her off hammered beyond reason as a present to a horny freshman wasn’t the right move. Ok, so the plotting of the movie would have been thrown off otherwise – yeah, I get that. But, I maintain that it wasn’t the move of the ideal man.

Jake and Caroline worked it out the next morning in a civilized, mutually agreed-upon way. She didn’t blame him and was happy to move on, so maybe his choices of the previous night don’t matter. Hell, she had already professed her love for Farmer Ted. So, no harm, no foul, I guess. But, Jake Ryan remains a fixture, like Mr. Darcy before him, of male idealness. And, I wonder if Jake isn’t just as susceptible to act like an ass as the rest of us every now and again.

Please understand, I still wanted Sam to end up with her man at the end, flawed or not. Maybe the flaws make Jake more interesting. But, you have to wonder if Jake will quickly tire of Sam’s insecurities and self-involvement as he did with Caroline’s superficiality and vapidness. Ok, now revolt if you will.