Essential Summer Brands of the 80s 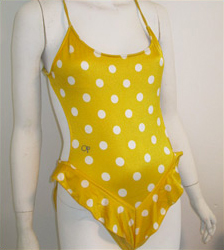 When I moved to Tampa, Florida in the mid-eighties my eyes were opened to a world of new things and new experiences like . . . beaches (yay!) the invasion of boys who came to visit for spring break (double YAY!) and Cuban Sandwiches (TRIPLE YAY!!!)

My wardrobe was also introduced to less clothing and new brands. Brands that weren’t dark, designer jeans or Members Only jackets – these were tropical, bright, beachy fun wardrobe staples that you wore . . . where else? Indoors! To junior high school! 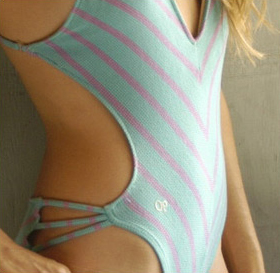 Oh, Op, how did I love thee? Your blinding turquoise and splatter of tropical flowers did wonders for my mood and for my figure – because nothing looks better on a pre-teen girl than some big ‘ol fuchsia and orange lilies on her caboose.

Op t-shirts and knee length floral shorts that we called “jams” were staples in our wardrobes (although, real Jams were a brand in their own right). We walked around in our everyday life like it was Halloween and were dressed up as surfers—or Spicoli. I recall owning many long sleeve/hooded Op t-shirts – which made a ton of sense in the suffocating heat of Tampa. Sweating bullets, I remained at the height of fashion.

Op didn’t just cater to the girls of the 80s. Oh no, guys got into the Ocean Pacific action with these bitchin’ shorts. And, really, corduroy is the logical material for a pair of shorts that short, right? 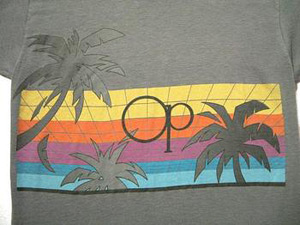 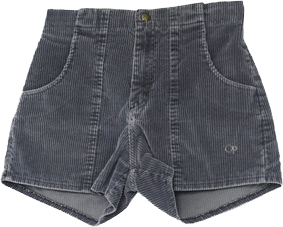 And right along with some Garanimals for your kids and Jordache jeans for yourself, you can pick up an awesome Op bathing suit or t-shirt at where else? Walmart.

What’s next? Going to Walmart for my gummy bracelets, Capezio shoes, Swatch Watches? Maybe a Benetton outfit at a “rollback” price of $11.97? I wouldn’t be surprised.

Again, very tropical but a bit more subdued and sophisticated – Panama Jack was kind of like the Banana Republic of teenage hip leisurewear. Lots of muted colors, khaki and this guy plastered all over everything: 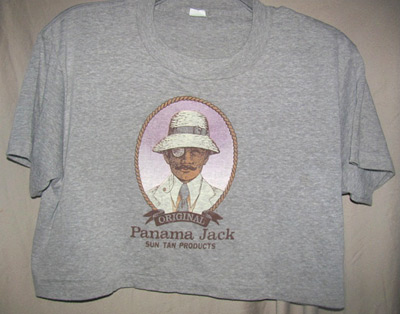 Honestly, who the hell was this guy with the pith helmet and the monocle? I have no idea but I did know that I had to have him on a half shirt just like the one above as well as on one of those awful early-eighties painter’s caps – ugh. Again, more memories of sweltering in a long-sleeve thick t-shirt with “PANAMA JACK” written in cursive down the arm in a mauve-pink and coral color combo. My Panama Jack t-shirts were considered my more “dressy” t-shirts – I remember my mom deeming them acceptable for church.

I’m not going to try and pretend I owned, wore or even had the guts to try on a Body Glove swimsuit. I did own a knock-off of one that was much less expensive and much more modest than the real deal. Body Glove started out making wetsuits then morphed into a swimsuit/t-shirt/sunglasses making giant.

STOP! In the name of glove.

To me, the quintessential Body Glove bathing suit was neon green and black and rocked the big black zipper down the boobage. 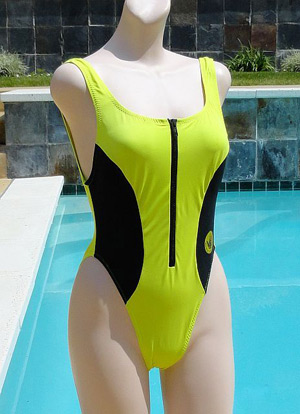 My friend Sharon had this suit and it looked fantastic on her, on me even the largest size would have looked as if I were trying to stuff myself into some Spanx that were two sizes too small.

With summer in full swing I suggest donning that OP t-shirt that’s been sitting in your drawer (newsflash, it’s now considered “vintage.” Yup, you’re old) and get out in the sweltering sunshine – but don’t dare mix it with your Panama Jack shorts. A fashion faux pas such as that could really ruin a girl’s summer. 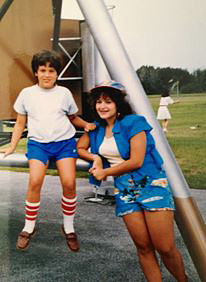