Q&A with Dave Kinzer, Author of “The 80s Music Compendium”

I just had the pleasure of reading the new book by Dave Kinzer, “The 80s Music Compendium” that released in paperback this week (Sept 13).  Dave Kinzer, a music teacher, sought to find new ways to teach music structure and theory to students in a way that would hold their interest longer than say Bach.  As an avid fan of 80s music, he turned to the treasure trove that is the catalog of Hot 100 hit songs from the 80s. He undertook a truly impressive challenge – to listen to every Top 100 song from the 80s and to group them into lists by musical similarity.  The lists run from the expected (sax solos) to the unexpected (songs with fake endings) to the downright bizarre (chipmunk noises).  To appreciate fully the monumental amount of work that went into this valuable 80s music resource, you need to first understand that a total of 4,172 songs appeared in the Top 100 from 1980 – 1989.  He listened closely to each and every one and then researched and cataloged them all by musical characteristics. If you ever wanted to know which country songs hit the pop charts in the 80s, this is your book.  If you ever wanted to explore just how pervasive Michael McDonald’s backup singing career was, this is the book for you.  If you just love 80s music and would like to dig a little deeper than the relatively short list of songs that get played on 80s stations today, you will love to pour over the lists in this book.  Many of the songs will be very familiar; some will be new.  All will be 80s hits that you’ll have a blast revisiting. 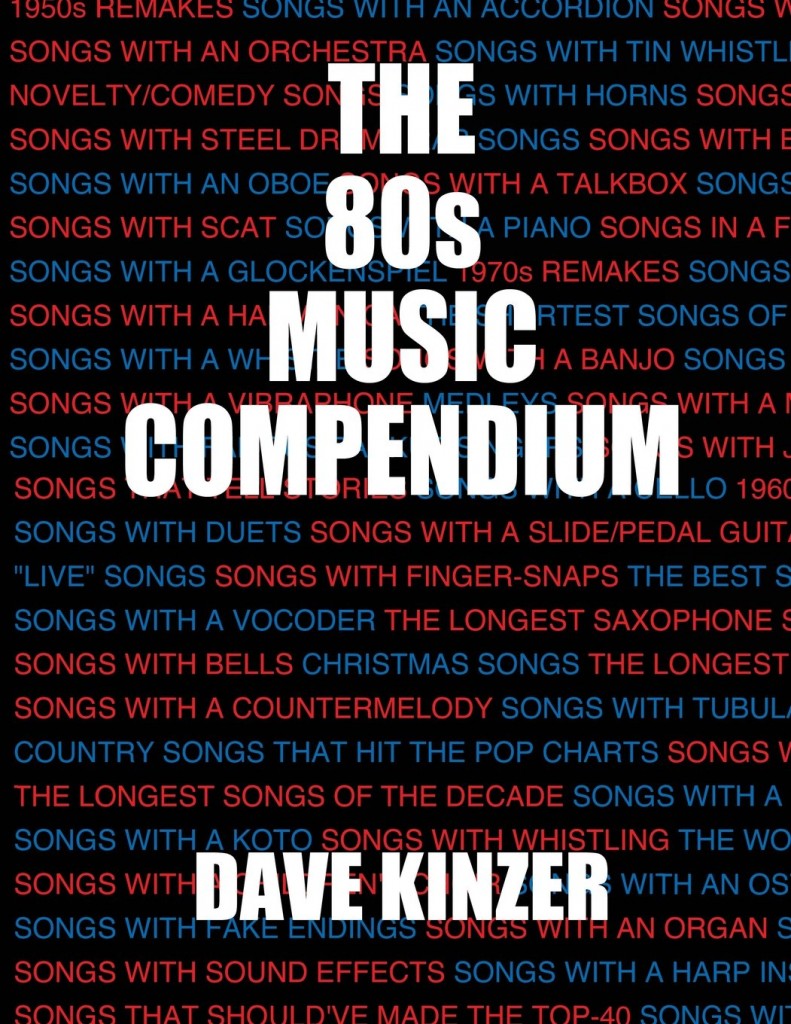 There are a few omissions in a couple of the lists that I took up with Dave, which he explained were a function of how he defined inclusion in each list.  And while I understand that in order for the lists to be accurate and consistent there have to be standards applied, I still feel like there are a few key songs missing in obvious places (‘Rapper’s Delight’ is not on the Longest Songs list, for example).  He addresses these issues head on in the book by inviting readers to send in their ideas and supporting evidence, which he’ll review for subsequent editions. Even with these quibbles, the book is a fun and very well-researched trip down 80s musical memory lane.

“Upside Down” (#1 hit for Diana Ross in 1980), “Women”, (#41 hit for Foreigner in 1980), and “A Matter of Trust” (#10 hit for Billy Joel in 1986) did not make any lists.  Generally, when a song didn’t make any list in my book, it meant that I found nothing unique or interesting about that song.  So, there were no lyrics in foreign languages, no rapping, no unusual instruments, no sound effects, etc.  It doesn’t mean I didn’t like the song, just that I didn’t find anything worth noting.


Five songs that represent 80s music: 1. Take On Me, by A-Ha.  2. Harden My Heart, by Quarterflash.  3. Maneater, by Hall & Oates.  4. Jump, by Van Halen.  5. Wake Me Up, Before You Go-Go, by WHAM! “Take On Me” and “Jump” are both noted for their use of the synthesizer, which invaded popular music in the 80s.  “Jump” is especially notable because Van Halen was known for their guitar riffs and solos to go along with a hard-rock sound.  Eddie Van Halen is frequently mentioned as one of the best rock guitarists of all time, and for “Jump”, one of their biggest hits, they rely on the synthesizer for the catchy part?  Even Van Halen got sucked into the synthesizer craze. As you mention, quite a few songs featured the sax in the 80s.  Something about the saxophone solo from “Harden My Heart” just screams “80s”, as soon as you hear it.  Quarterflash’s lead singer was known for her saxophone solos- most of their songs featured one.   “Maneater” also featured the sax. “Wake Me Up…” by WHAM! is a great pop song.  I think this song bugs some people though. It’s bubbly, cheerful, the title is slightly ridiculous, the video is definitely ridiculous, and it makes frequent use of George Michael’s falsetto.  I guess you could say it’s one of the songs from the 80s that is a little fluffy, light on the lyrical depth.  But so what?  The song is fun.  It’s one of the few songs from the decade that could represent the whole 80s music scene.

Radio stations in the early 80s didn’t know who they were, or who they wanted to be.  They were still being influenced by the late 70s trends of playing disco, light rock/easy listening, James Taylor-type music.  They were basically experimenting, playing weird medleys, country songs, instrumental songs, the “live” hits were mostly by classic rock artists (Eric Clapton, Bob Seger, Eagles, Heart, Rush, etc.)- they were even playing some jazz and classical music!  It’s almost as if they said, let’s just play everything, and see what people like. All of those genres took a big hit in popularity around 1983.  What else happened in 1983?  Michael Jackson releases the best-selling album of all time- “Thriller”.  And pop radio was never the same.  I mean, how could you play the latest Oak Ridge Boys tune after “Beat It”?  It just didn’t work well, so radio moved away from those sub-genres and started playing, what we normally think of as “80s Music”- Hall & Oates, Genesis, Michael Jackson, Journey, Madonna, etc.

I was surprised.  Of course, every 80s fan knows “Queen of Hearts”, and “Angel of the Morning”, both top-5 hits from 1981.  After those two, though, she’d never have another top-5 hit on the Billboard Hot 100 chart again.  Her last three hits all failed to make the top-40.  And I think that’s why we’re surprised.  We can usually remember the big hits- It’s the song that peaks at #63 that we forget.

I don’t see that ever happening again.  The music of Mozart, Beethoven, and the other great composers is fantastic, of course, but it’s also so far removed from pop music.  Listeners today won’t go for it. Every decade has a variety of genres that make the charts, but it does seem that, at least in the early part of the decade, the 80s had a huge variety of songs- It could probably beat or rival any other decade for variety.

It is true I did not want to single out one song (and one songwriter!) for the title of “Worst Song of the Eighties”.  I had to acknowledge that there were some dreadful songs from the decade, but I didn’t want to be mean about it.  There’s also a part of me that says, “Yeah, that song is terrible, but it still was popular enough for it to make the Billboard Hot 100.”  Then that same voice has the gall to ask me, “Exactly how many hits have YOU written, again?”  So I compromised by listing them by year. But if pressed for an answer, the worst song of the decade has got to be, “I Know What Boys Like”, by The Waitresses- off-key singer, annoying sax solo, and the “Na-na-na-na-naaaaaa”.  Ugh.  Somehow it got to #62 on the charts.

At first, I started with all the number one songs from 1980, then worked my way down the chart to the songs that peaked at #100.  I quickly realized that I should do the opposite, and start at #100 so that I would have better songs to look forward to as I made my way through the songs of the particular year.  When I finished 1980, then I moved on to the next year and the next, until I finished the decade.

You can also listen to summaries with snippets of songs from many of the lists on Dave’s YouTube Channel here.  Buy the book in paperback or for the Kindle.  Hint: This book would make the perfect gift idea for the 80s fan in your life – the holiday season is just around the corner.