Catching Up with Nina Blackwood

TV personality, disc jockey, reporter, journalist, classically trained musician — when it comes to entertainment, Nina Blackwood really has all the bases covered. And that’s not even mentioning the fact that she’s one of the original MTV VJ’s — something that only five people in the history of the planet can claim!

On top of all that, she’s sort of LikeTotally80s’s unofficial patron saint. Truly, Nina always keeps the 80s flame burning — by hosting her daily radio show on Sirius XM’s “80s on 8”; by religiously posting 80s-themed tidbits on her Facebook page; and by taking part in an 80s Cruise around the Caribbean, featuring bands such as Huey Lewis and the News and Starship. (The “bodacious boat” sets sail at the end of February and cabins are still available, according to the promotion’s website.)

Recently, LT80s re-connected with Ms. Blackwood. (We originally interviewed her in 2011.) Over the course of two e-mails, Nina offered her insights on her talents (she’s a harpist!), the current state of MTV, and that distinctive voice of hers.

OK, let’s get this out there right off the bat: What exactly is the connection with you and John Waite’s “Missing You”? Do you ever hear that song and say, “Hey, that song’s about me!”

John and I were very close at the time. And yes . . . he told me that I — along with his wife — inspired the song. It is a beauty and became a number one hit . . . so it is all very special. I smile every time I hear it

We last interviewed you in 2011. Since that time, you and the other original MTV VJ’s (minus the late J. J. Jackson) published a book called VJ: The Unplugged Adventures of MTV’s First Wave. What was the process of writing that book?

We all spent hours respectively being interviewed by Rolling Stone contributor and author Gavin Edwards who then assembled it all in a cohesive form. Gavin did a fantastic job!

Besides collaborating with the other original VJs for this book, do you stay connected with Alan Hunter, Martha Quinn, and Mark Goodman? What about the off-screen talent?

All of us are quite close — a VJ family, basically. Although we live in different areas all over the country, we work together on SiriusXM 8 The Big 80s on 8. In many ways, we are closer now than even back in MTV, as we have shared our lives together for over three decades now. 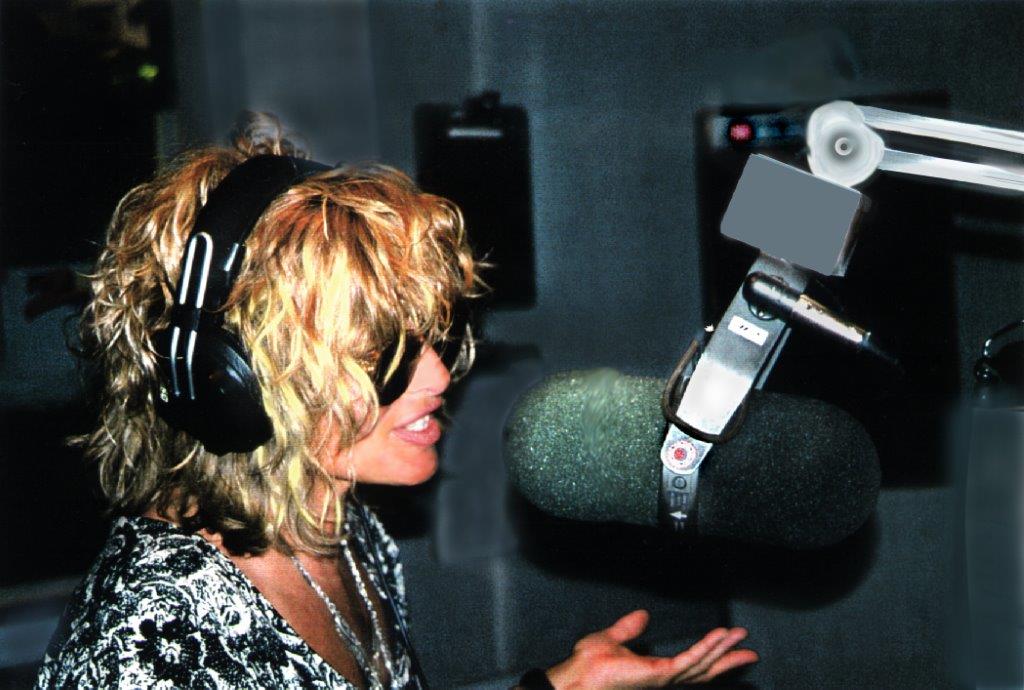 One thing I learned from your book is that, as a teenager, you started playing the harp — which struck me as so interesting, since your whole persona is rock-and-roll, and the harp seems to be the furthest thing from rock-and-roll that you can get.

I began playing piano at four years old and then graduated to harp. Although I was a classically trained musician after seeing the Beatles, I expanded into pop and rock, which is the style I played as a professional.

Do you still play the harp? Have you ever jammed with other musicians — or does the harp not really lend itself to jamming?

I actually met my former manager by jamming with his band.

Does the harp speak to some softer, more contemplative side of Nina Blackwood?

Believe it or not, I am actually an introvert and contemplative person most of the time. My work as VJ/DJ,performer is what brings out a different side.

You also admitted in the book that you are more of a Sammy Hagar girl than a David Lee Roth gal. As you know, fans have very strong opinions about this. What would you say to convince someone to defect to the Van Hagar camp?

I would rarely try to “convince” anyone to like any type of music or performer. Appreciation of music and the arts is purely subjective.

Anything going on in your life right now that you’d like our readers to know about you?

Very excited about our upcoming 80s Cruise which Mark Goodman, Alan Hunter and myself will be hosting. Cruising around the Caribbean with some great bands like Huey Lewis and the News, Kool and the Gang, Richard Marx etc etc . . . island hopping . . . riding horses on the beach . . . Not too bad, hahaha! I also am in the process of setting up a Foundation which will work in conjunction with various Animal Rescue and Environmental Groups.

Can you tell our readers a little bit more about your 80s Cruise? It sounds fantastic — a dream come true for 80s fans! How did that come together? (And will Billy Ocean — who knows a thing or two about Caribbean Queens — be making a surprise appearance?)

As far as coming together, the Cruise Company has worked with Sirius XM on their Jazz Cruise, so they decided an 80s Cruise might be fun. The best thing if anyone wants more info on the Cruise is to go to the 80s Cruise Website or Facebook page. To my knowledge Billy will not be on-board . . . but who knows?

And can you say more about your foundation?

Not at this time, as we will be giving an official launch statement. Be more than happy to discuss all of it at that time.

You got the job of VJ after answering an ad in Billboard. At the time, did you have any idea what you were getting yourself into? And do you think MTV is still the cultural touchstone it was thirty years ago?

Actually is was an article in Billboard Magazine about the channel, not an ad. Since I was already working in L.A. on “video music” TV projects in pilot form, it seemed something that was right up my alley. Nobody knew for sure that it would take off like it did so taking the job and moving to NYC was basically a gamble. As for MTV being a cultural touchstone now . . . with their current programming, absolutely not. I really am appalled at what the channel turned into and don’t know who watches it. Very far removed from the original concept of MTV MUSIC television the operative word being MUSIC. The channel as it was does not exist, and in a way, I believe the brand has been de-faced over the years.

Can you pull back the curtain a little bit and tell us what the day-to-day of working at MTV was like? What typically was your shift? What did you do when the videos were playing? Did you get any say in what videos were played? Are there some great MTV bloopers from that era? And on a (sort of) related note: did any of you ever get Kurt Loder to crack a smile? He seemed like the most somber dude on the planet.

Generally I was the 1st person to arrive at the studio in the morning. (I) would prep my shows, choose wardrobe, and do makeup. Then, after that, the crew got in to tape the daily shows. There are many bloopers from the early years. As for Kurt, I had left the channel to work on Entertainment Tonight, Solid Gold and my syndicated radio show by the time Kurt joined the fold. 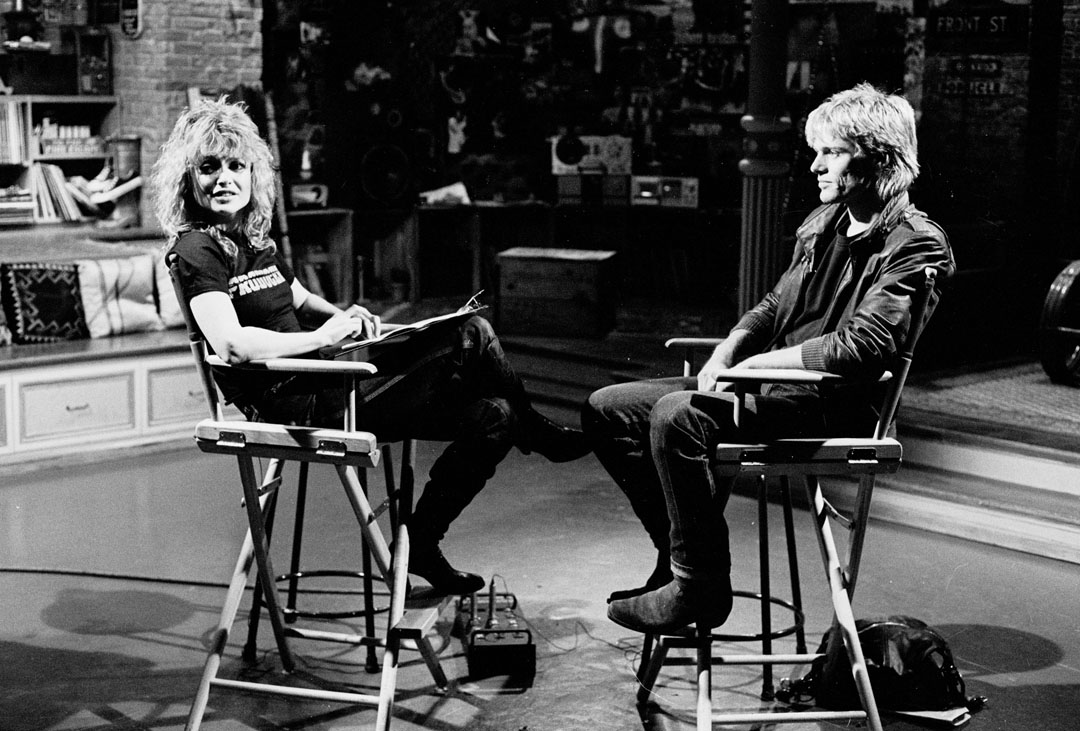 It seems every article written about you contains the word “raspy,” referring to your voice. Does it bother you when people refer to your voice that way? Did you have your voice when you were a teenager? Do you think your voice helped you in your broadcasting career?

Yes I have always had a raspy voice. A childhood nickname was “Froggy” — hahaha! So, no, it is what it is. As for my career . . . what I do as a job is to verbally communicate so I suppose it has (helped). I think my voice is an acquired taste — hahaha. It is unlikely that I would be hired to do an advertisement for baby food.

Between MTV, Solid Gold, Entertainment Tonight, and your radio shows, you’ve probably interviewed thousands of celebrities over the past thirty years. Do any interviews stand out as particularly memorable — in a good or bad way.

I have a lot of favorites, too numerous to list. Some would be Annie Lennox, Ray Davies, Tom Petty, Fleetwood Mac, Richard Branson, Roger Waters, etc.

How about those wacky contests MTV had back in the 1980s? I specifically remember the John Mellencamp one where the prize was a house, which the winner had to paint pink. (What do you think ever happened to that house?)

Someone messaged me regarding that pink house not too long ago. I think the person who won never even lived in it and it was sold at some point down the road. Other than that, I have no idea. The contests were great . . . a lot of fun for everyone involved.

I know why I love the 80s; I was a teenager at the time, and that was when music became important to me. How about you? Why do you still love the 80s? Do you get feisty when younger folks talk about how “cheesy” 80s music is?

I love rock and roll period. It doesn’t matter to me what era it is. As for calling it cheesy . . . well, honestly some of it is!! As for it’s longevity . . . for the most part, 80s music is upbeat in tone and a lot of fun. It brings back carefree and enjoyable memories for most people. It was hugely diverse as well. On one hand, there were all the synth bands — Depeche Mode, Ultravox, that type of thing. Then the poppy stuff like Madonna, Michael Jackson etc. And then the more serious artists: Springsteen, U2, Mellencamp. And, of course, the Hair bands!! Basically something for everyone. That is the beauty of it. A central outlet for that kind of musical diversity does not exist anymore.

A character in Woody Allen’s Midnight in Paris says this: “Nostalgia is denial – denial of the painful present . . . The name for this denial is golden age thinking – the erroneous notion that a different time period is better than the one one’s living in. It’s a flaw in the romantic imagination of those people who find it difficult to cope with the present.” Now, as someone who hosts 80s-themed radio shows, what do you think about this? Is there anything wrong or flawed with having nostalgia for previous time period?

Well, I think it is part of human nature to soft-focus memories and shine on them a more ideal spotlight than maybe they were in reality. It is normal for people to reflect. The point is, all of us must live in the present with an eye on the future.