Members Only Jackets – Are You a Member?

Home » Members Only Jackets – Are You a Member?

Members Only Advertising Tagline: “When you put it on, something happens.”

This tagline was so great that it got co-opted in the early 1990s and used by various condom makers. Nice. Check out the magazine ad below featuring this tagline.  Something definitely looks like it’s going to happen for that trio, especially Shades in the middle.

Anyway, back to the jackets. If you grew up in the 80s, you either had a Members Only jacket or you were a complete and total fashion outcast. You were a member or you weren’t.  For a few years anyway, Members Only jackets were the staple of early 80s fashion outerwear and everyone who was anyone owned one. When I had finally begged sufficiently enough to wear my mom down into getting one from me, nothing would do but teal. Oh yeah. 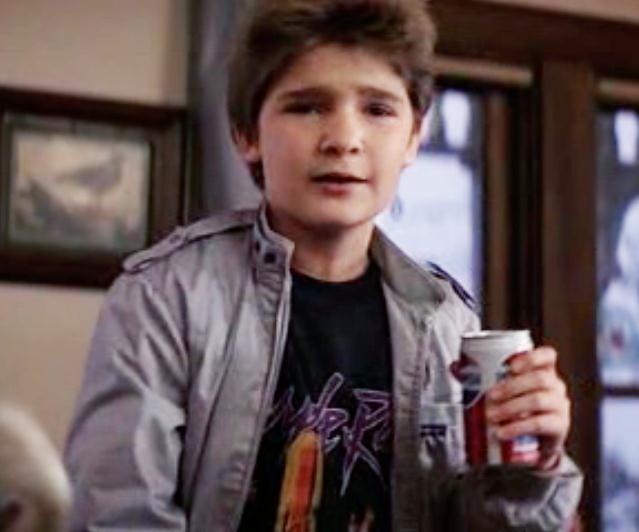 Check it out – not only is Corey wearing a sweet Members Only jacket, he’s also sporting a Purple Rain tee. This is almost too much 80s goodness for one photograph. 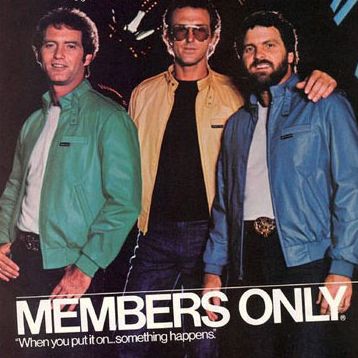 The ubiquitous jackets were first introduced in 1981. They were available in a dizzyingly wide array of color choices. Given it was the 80s, after all, color was to be embraced and enjoyed. 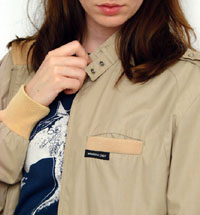 While the Members Only brand included other clothing and different styles of jackets, when someone refers to Members Only jackets, they’re usually referring to the cotton/poly jackets with the nylon lining. These Members Only jackets feature an elasticized waist and wrists and a zip-up front with snaps at the neck. The finishing touch is the black tag just below the breast pocket that reads “Members Only” and proclaims its authenticity and awesomesness to the world.

Since the 80s, Members Only jackets have been both loved and hated. While some people opt to wear vintage Members Only jackets for their nostalgic value, others have been quick to ridicule the brand and the people who wear it. Just watch the movie Shallow Hal and see Gwyneth Paltrow ask Jason Alexander if he’s the last member of the club when she sees him wearing a Members Only Jacket (what does she know anyway; she consciously uncoupled from her membership year ago).

We, of course, take the former approach and remember fondly the feeling of ultimate inclusion that came with owning and proudly wearing a Members Only jacket.  In combing through my junior high yearbook from 1986, I ran across this gem (below).  If you think one Members Only jacket is great, then a three-fer on a set of identical triplets is surely more than three times as nice.  Really, all I can say is, thank you, thank you , thank you to the yearbook staff for capturing this important and thrice-multiplied cultural event on camera. 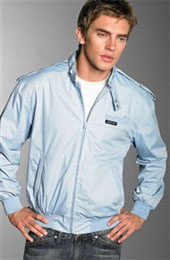 Hot All Over Again

Members Only Jackets have reemerged and are hot all over again, reclaiming their place in the fashion world. After all, when you put it on, something is bound to happen. (so sayeth their advertising!) In 2004, the brand was licensed by Kirtie Regan, who has brought it back and expanded it with a new line of apparel. (source: Wikipedia) See the links above in the UPDATES to see pictures of today’s stars in their jackets and links to online resources for buying them new. Somehow, strangely, it seems to work.

Vintage Members Only Jackets are easily had on ebay. A simple search for “members only jackets” and you could be in the club again. If you prefer new over vintage, check out the LookBook on the official Members Only site. They’ve got some great modern styling on this classic look.

What do you think of the comeback of this 80s fashion moment?