The Rubik’s Cube ushered in the 80s and the simple puzzle-like toy took the decade by storm. Originally designed in 1974 under the name “Magic Cube” the product was renamed the Rubik’s Cube in 1980 and went on to become one of the world’s best-selling toys. 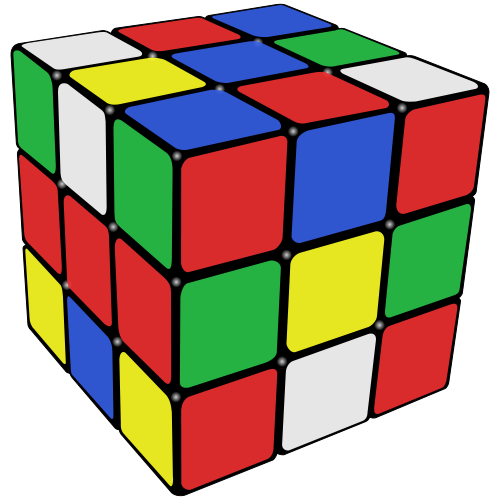 So what exactly is a Rubik’s Cube? Considering how popular the darned thing is, it’s actually quite a simple concept. The Rubik’s Cube is a square cube that consists of 26 smaller square surface cubes. These 26 surface cubes all rotate around an inner core mechanism. Each side of the large cube is one solid color. When you twist and turn the sides of the cube around, the colors become separated and mixed. The goal is to then rearrange the smaller single cubes back the way they were so that all sides of the cube are a single, solid color again.

Sounds easy, right? Tell that to the millions of people who have spent hours trying to figure the Rubik’s Cube out. (Unless of course, you were one of the cheaters who just took the stickers off and rearranged them when you got tired of trying to solve the puzzle.)

I’ll admit that I was part of the move-the-stickers-to-solve crowd that simply became too frustrated to continue turning the sides of the infernal thing. Sadly, the internet and all its answers didn’t exist in my Rubik’s-frustrated days. Now, there are websites devoted to helping you solve the complexities of the cube. Here is one great site to help you out, although the instructions seem to underline why it is that I never achieved this feat on my own! How to Solve a Rubik’s Cube by Rubik’s Solver.

So there we were – all of the children of the 80s – sitting around playing with this little box-like device. Just to prove to our kids we weren’t nuts, we’re probably going to buy them a Rubik’s Cube of their own. In fact, nowadays, the Rubik’s Cube comes in a variety of designs. Instead of just coming in a 3×3 design, it now comes in a 2×2 design, a 4×4 design and a 5×5 design. We can only hope that one of these new designs will be able to compete with the Xbox 360 and the Wii for the attention of our kids.