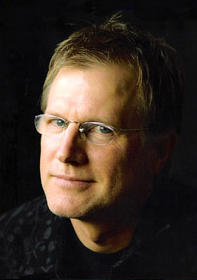 Alan Hunter, one of the original five VJs on MTV, talks with Like Totally 80s about his time on MTV, favorite interviews, weighs in on the state of today’s MTV and shares what he’s up to now. Sharp-witted with a slightly off-kilter sense of humor, Alan
would call it like it saw it, and we love that about him. Thanks so much to Alan Hunter for agreeing to talk with us! You can connect with Alan on Facebook at facebook.com/1stVJ.

LT80s: You were in the music video for David Bowie’s “Fashion.” We’ve rewatched the video looking for you. Are you the guy in the dance studio in the striped shirt?

AH: I am the guy with the blue striped mime shirt and suspenders, but didn’t you notice my black dance tights? Yowza! Great gig: 3 days, 3 square meals and $50/day and I got to meet the thin white duke. Only 3 months later, I got the MTV gig…how prophetic.

LT80s: What’s the craziest thing that ever happened during your time with MTV?

AH: Well, first, getting the gig in the first place. I was ill prepared. As far as a single project I worked on, AMUCK IN AMERICA had to be the most insane. It was a pre-cursor to many of the road reality shows to follow (reality shows with a home video look in general). AMUCK was non-stop debauchery…and I mean that in a R&R cliché way. I was never in a band but got to live like a maniac on the road for MTV in the summer of 1986…acting like a crazy man, fucking with middle America, with a model sidekick and a band of merry men & women on the crew. Did I mention I had a 3 month old child and a happy marriage?

LT80s: What was your favorite moment as an MTV VJ?

AH: It was always nice to gather with my fellow VJs and the entire crew and office staff at MTV for those year end Christmas videos – Billy Squire, PeeWee Herman, David Johansen, yes….I’m missing a few. A warm feeling back in the days when MTV, though a big company, was still like a wonderful dysfunctional but close family. Live New Year’s Eve shows were fun but by 2am, it was difficult to concentrate in the middle of the greatest party in the world that night.

LT80s: What is your favorite artist interview that you’ve done? Why?

AH: Well, I had many and sometimes they weren’t rockers – Robin Williams and Dan Akroyd. Even though Ozzy Osbourne was incomprehensible and I was sweating to make an interview happen, it was fun. I interviewed Lou Reed just after Andy Warhol died. They were big friends and he came into the studio to eulogize and requested that I do the interview. It was very flattering. The most compelling and rewarding interview was Billy Joel in Russia, my first freelance job for MTV. I went to Russia with Billy’s tour during the middle of Perestroika. Fascinating times and a good long interview with Billy. 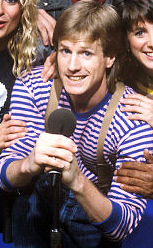 LT80s: Were you ever starstruck by any of the musicians you interviewed over the years? Who?

AH: Sure. JJ was interviewing Robert Plant in the studios and we’d all come down when someone that big was in the house. After it was over and his huge entourage was milling around, I braved going up to introduce myself. I approached and did a funny royal kneeling gesture, to which Robert said, “arise, Sir Alan.” Alas, the guy knew my damn name. A weird thing that all these rockers knew us.

LT80s: Did the 5 VJs socialize? What were the off air personalities like?

AH: We’d go out together quiet a bit, maybe share a table at a concert. I’m looking at a swell picture of Mark, Nina, Martha and me at the Roxy for a Tina Turner concert. When we hung as a group, it was a head turner for folks in the club. There was less hanging out in the final years as we each ran in our own circles. Still lotta love.

LT80s: Do you watch MTV now? We’ve asked Nina Blackwood and Martha Quinn this same question – how do you feel about the direction MTV has taken?

AH: “Evolution,” I say to those that bemoan the direction. Ever since Remote Control started in 1987, the channel was looking to move beyond the video jukebox. It was about money and selling shows, not a 24/7 atmosphere of video music. Certainly the past decade has produced very little for a man of my age to care about, but then I ain’t the target. I tune in occasionally just to keep up with some of the vocabulary but I can’t relate.

AH: The innocence, the eclectic pallet of music, the big tent tolerance, the experimentation and the fun.

LT80s: Aside from your work at MTV, what work are you most proud of?

LT80s: What brought you back to Birmingham?

AH: I started a production company with my brother (film and TV production) and built an entertainment complex called WorkPlay. We just sold WorkPlay after 10 fabulous years of building a great national reputation as a music venue. We’ve garnered an Oscar nomination and our films have had Sundance and South by Southwest premieres. We are developing several film projects presently and hoping to sell a reality TV show to a major cable outlet.

LT80s: As a pioneer in the reality TV genre (thinking of MTV Spring Break and MTV Hedonism Weekend with Bon Jovi), how do you feel about the recent crops of reality TV shows?

AH: Well, per last answer, my company is developing a reality show that’s more of a documentary reality show. It’s about a company in the security and entertainment business. Yes, those early Spring Break, Hedonism and AMUCK shows were ground breaking and I’m really proud of them. Inevitably, the audience has grown more fascinated with looking at themselves. More accurately, they’re fixated on watching the suffering of other poor souls, vicariously working out angst about their own crappy situations. These reality shows bore me, except for “Intervention.” I must admit…I’m addicted. Ouch. They seem to actually help people, not just exploit them. So, the bottom line, exploitation of the weak and ignorant…not into. Survivor”, “Big Brother”-type shows…boring because it’s all manipulation. “Kitchen Nightmares” and Anthony Bourdain’s cooking show…love it. “Iron chef” (the Japanese version – “squeeze-on”)…oh yea!

LT80s: This summer will mark the 30th anniversary of the launch of MTV. Holy Cow. Does it seem like 30 years, or more like yesterday?

AH: Some days, when my back aches, it seems centuries ago. Other days, when I’m talking to Goodman about something or somebody comes up to me in the street and lands a fond memory on me, it’s a not so distant delight. Most days, it’s just a seamless, continuous part of my life. I don’t partition or compartmentalize the various phases of my life. The blending flow of it all, the ups and downs, good bad ugly are ever present in everything I think and everything I do. Swear I didn’t read this philosophy anywhere. I left LA a long time ago.

LT80s: I look forward to seeing your new movie, “Lifted” that you co-produced as well as co-star in. When will it be out on DVD?

AH: I would love for you to see that swell little movie too. I hope the DVD will come out this year. It’s not going to be a theatrical release sadly, a function of the difficult time an Indie movie has making it to the cineplex these days. But it was great fun, a labor of love and stars some great talent – Dash Mihok, Nikki Aykox, Trace Adkins, and Ruben Studdard.

LT80s: What other current projects are you working on?

AH: The reality show, which is secret until we announce it’s sale (hopefully soon), another film project in development and the book we’ve all been waiting for…..the early days of MTV as told through the eyes of the original MTV VJs. You heard it here. Stay tuned. Of course, I’m busy busy with my SiriusXM Big80son80 and Classic Rewind shows. I’m a tired puppy.