As far as fashion goes, no decade is quite as no-no-notorious as the 80s. After all, in what other decade could you get away with wearing skin-tight pants one day and baggy “MC Hammer” pants the next? During what other time period could you wear leg warmers, a sweater and a miniskirt all at the same time (and in electric neon colors)? Take a walk down memory lane. Here are the top 10 80s fashion fads we used to love.

In all of these fads, color was the order of the day. The drab khakis, white and black of the 90s do not apply. Big color and color mixed in unusual ways (say, bright yellow with red) were considered totally tubular – to the max. 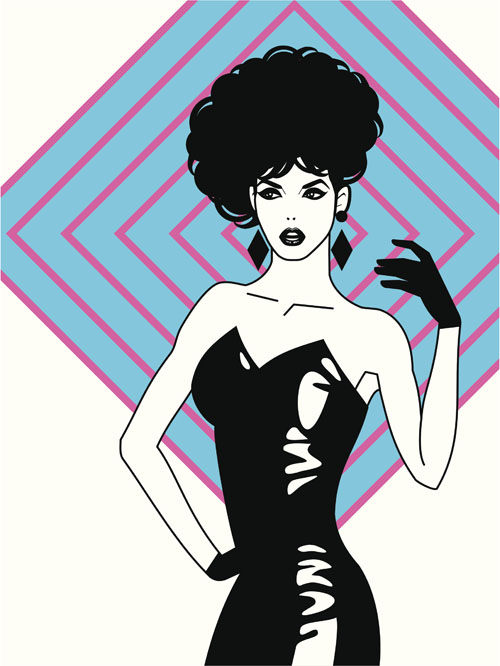 Let us here from you.  Do you agree with our top 10?  Did we miss your favorite 80s fashion trend?  Leave a comment below, or tell us on Facebook or Twitter.

Shoulder pads may very well be the most decade-defining of the top 10 80s fashion fads.  Maybe it had something to do with woman’s lib and the assertion of power that women were beginning to have in the work place?  Check out the gals in the photos below, don’t those big, strong shoulders tell you that these are not women to mess with?  Whatever the reason, we wore shoulder pads often and we did so with pride. The second picture below is a beautiful example of shoulder pads in action. Between her totally bitchin’ feathered hair and the awesome over-sized jacket with shoulder pads to the heavens, this 80s babe had it going on.

The shorter the better … women and girls loved miniskirts. Denim was the most popular, but miniskirts were made in a number of other materials including knit and leather. These were often paired with leggings. This particular look has made a big comeback recently. My favorite look in the mid-80s was to pair one of my many mini-skirts with my high-top Reeboks and a pair of matching scrunch socks.  Now, that’s a rad 80s look.  The only people not wearing miniskirts in the 80s were men (ok, well some did) and elderly women.

Another of one of the top 10 80s fashion fads that didn’t make a lot of sense was that of leg warmers. Maybe we all had really cold legs because of the miniskirts we wore or maybe we just thought they looked cute. Whatever our reasoning was at the time, at least one or two pairs of leg warmers could be found in every girl’s dresser.

You know how cute Christmas ornaments look on a tree? During the 80s we thought the same would apply to our ears. Huge earrings from various costume jewelry collections were all the rage and if your earrings didn’t touch your shoulder, they weren’t big enough.

Oh yes . . . and then there were parachute pants. They started off skin tight and ended up baggier than a potato sack. Parachute pants may very well be the one piece of clothing that sums up the ridiculousness of the top 10 80s fashion fads.  But, at the time, they felt so cool.  They were the perfect thing to wear to the skating rink, and they were worn equally by guys and girls.

Who didn’t want a Members Only jacket in the 80s? If you didn’t have one, you were instantly labeled a dork, and you could forget about getting in with the “in” crowd. Members Only jackets were all the rage, and imitations were completely unacceptable. Clark Griswold himself, sported one throughout National Lampoon’s Vacation.  Take Clark’s lead and push the sleeves up to just below the elbow–now you’re talking 80s cool.

A one-size-fits-all clothing store featuring knit skirts, shirts, belts and leggings in coordinating colors. The clothes were sold in UNITS boutiques located in malls throughout the United States. You could buy six different pieces of UNITS clothing and create an entire wardrobe from them. It goes without saying that UNITS did not make it out of the 80s.

The stirrup pants version of this particular fad had to be the worst. Presumably the idea of fashion and being in fashion is to look as good as possible. These pants made NO ONE look good. They created a triangle-leg effect that made even the thinnest person look big. While many of these 1980s fashions are making their way back on the scene and into our stores, the stretch pants/stirrup pants trend needs to stay tucked safely back in the 80s.

Last, but not least, we have the 80s fashion fad of oversized tops. Big sweaters, sweatshirts and t-shirts were totally hot and wearing them over a miniskirt or a pair of leggings made them even hotter. These tops were most often belted with big and gaudy, low slung belts with the top bloused over the belt.