The glamour and excitement typified by the 80s really kicks into gear in 1981. Charles and Diana marry, MTV launches and IBM releases the original 5150 IBM PC. Music and technology are changing at a rapid pace. The American hostages in Iran are finally released after 14 months of captivity, the first heart-lung transplant is performed an the first female Supreme Court Justice is appointed. Amid so much progress and change, however, there were darker moments. The first recognized cases of AIDS appear and Pope John Paul II is shot.

In music and television, Luke and Laura tie the knot on General Hospital and “Jessie’s Girl” and “Kiss on My List” dominate the airwaves. At the box office, Raiders of the Lost Ark, Chariots of Fire, Arthur, and On Golden Pond had us packing into the theaters. The 80s are now truly underway. 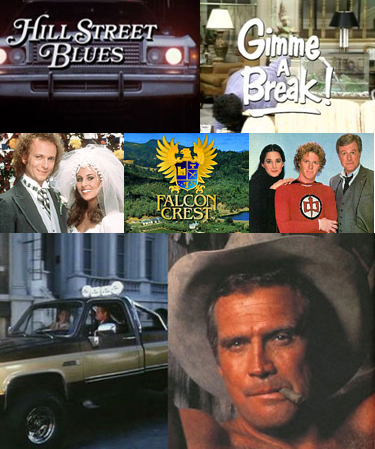 The Fall Guy
Starring: Lee Majors, Douglas Barr, & Heather Thomas
Colt Seavers is a stuntman, who when he is in a financial crunch, works as a bounty hunter. He is aided by his cousin Howie, who has gone to practically every college and studied every course for a semester, and his protégé Jody.

The Greatest American Hero
Starring: William Katt & Robert Culp
Ralph Hinkley was minding his own business, a teacher on a field trip with his high school students, when the bus he’s driving mysteriously drives itself out into the desert. A startled Ralph is soon visited by aliens, who had decided to endow him with superhuman powers to fight the battle against injustice and crime. To this end, they gave him a special suit and an instruction manual. Unfortunately, Ralph managed to lose the instruction manual, and the aliens have a nasty habit of never being around when you need them.

Hill Street Blues
Story of an overworked, under-staffed police precinct in an anonymous inner city patterned after Chicago. We follow the lives of many characters, from the lowly beat and traffic cops to the captain of the precinct himself.

General Hospital
Luke and Laura get married; the soap-opera is the highest-rated hour in daytime television history.

Raiders of the Lost Ark
Starring: Harrison Ford & Karen Allen
Renowned archeologist and expert in the occult, Dr. Indiana Jones, is hired by the U.S. Government to find the Ark of the Covenant, which is believed to still hold the ten commandments. Unfortunately, agents of Hitler are also after the Ark. Indy, and his ex-flame Marion, escape from various close scrapes in a quest that takes them from Nepal to Cairo.

On Golden Pond
Starring: Katharine Hepburn, Henry Fonda, & Jane Fonda
The loons are back again on Golden Pond and so are Norman Thayer, a retired professor, and Ethel who have had a summer cottage there since early in their marriage. This summer their daughter Chelsea — whom they haven’t seen for years — feels she must be there for Norman’s birthday. Chelsea and her fiance are on their way to Europe the next day but will be back in a couple of weeks to pick up the fiance’s son. When she returns Chelsea is married and her stepson has the relationship with her father that she always wanted. Will father and daughter be able to communicate at last?

Arthur
Starring: Dudley Moore
Arthur is a happy drunk with no pretensions at any ambition. He is also the heir to a vast fortune which he is told will only be his if he marries Susan.

Airplane!
Starring: Kareem Abdul-Jabbar, Lloyd Bridges, Peter Graves, Julie Hagerty, Robert Hays, Leslie Nielsen
Ex-Navy pilot Ted Striker has been nervous about flying ever since THAT incident during the war. He’s on a flight which would cause anyone concern: he seems to be the only sane person aboard. Of course, everything that could possibly go wrong on this flight will go wrong… what do you expect with a co-pilot who doesn’t realize he’s a basketball star, and an air traffic controller with a substance abuse.

Stripes
Starring: Bill Murray, Harold Ramis
Two friends who are dissatisfied with their jobs decide to join the army for a bit of fun.

For Your Eyes Only
Starring: Roger Moore & Carole Bouquet
Agent 007 is assigned to hunt for a lost British encryption device and prevent it from falling into enemy hands.

Chariots of Fire
The story of two British track athletes, one a determined Jew, and the other a devout Christian who compete in the 1924 Olympics.

Time Bandits
A young boy accidently joins a band of dwarves as they jump from time-period to time-period looking for treasure to steal.

Clash of the Titans
Starring: Laurence Olivier, Harry Hamlin
A film adaptation of the myth of Perseus and his quest to battle both Medusa and the Kraken monster to save the Princess Andromeda.

Absence of Malice
Starring: Paul Newman, Sally Field
Michael Colin Gallagher, the son of a long dead Mafia boss, is a simple liquor warehouse owner. Frustrated in his attempt to solve a murder of a union head, a prosecutor leaks a false story to reporter Megan Carter that Michael is a target of the investigation, hoping that this will provoke Michael to tell them something for protection. As his life begins to unravel, others are hurt by the story. Knowing nothing to trade to the prosecutors, Michael must regain control of his life on different ground.

Reds
Starring: Warren Beatty & Diane Keaton
A radical American journalist becomes involved with the Communist revolution in Russia and hopes to bring its spirit and idealism to the United States. A Love Story told inside period politics at the height of the Russian Revolution.

The Fox and the Hound
Two friends, Tod the fox & Copper the hunting dog, that didn’t know they were supposed to be enemies.

Excalibur
The myth of King Arthur brought once again to the screen.