Timbuk 3 said it best in one of the year’s top songs, “The future’s so bright, I gotta wear shades.” 1986 was marked by both advances and setbacks. Technology advances helped the Soviet Union launch the Mir Space Station and had the UK and France building the Chunnel. Sadly, it also saw the Space Shuttle Challenger disaster and the explosion of one of the nuclear reactors at Chernobyl. We saw Fergie get married to the Duke of York and 5 million people join hands in Hands Across America. Robert Palmer had us “Addicted to Love” and Kenny Loggins took us to the “Danger Zone.” Ferris Bueller took a day off while the Chicago Bears won Super Bowl XX. 1986 saw the birth of Lindsay Lohan and the Olsen twins and the deaths of Donna Reed and Cary Grant.

Learn all about the year that celebrated the first MLK Day and take Mr. Ocean’s advice, “When the Going Gets Tough, The Tough Get Going.” 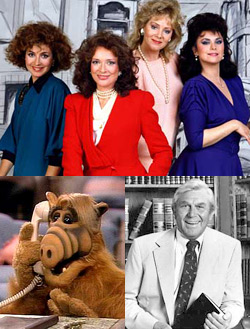 ALF
Starring: Max Wright, Anne Schedeen, Andrea Elson, Benji Gregory, & Paul Fusco as the voice of ALF
The Tanners are an average American family. One day, they discover that they have a visitor. He’s small, he’s furry, he’s arrogant, and he’s an alien from the planet Melmac. Unsure what to do, they name him ALF: Alien Life Form. Alf soon decides that as much as he misses his home planet, there’s a lot to be said for Earth. After all, the Tanners are willing to concede anything as long as he doesn’t announce his presence. Oh yeah, the Tanners also have a cat, which looks rather tasty.

Matlock
Starring: Andy Griffith
Criminal defense attorney Ben Matlock seeks to prove the innocence of his client as he takes on his/her case, of which most involve murders. 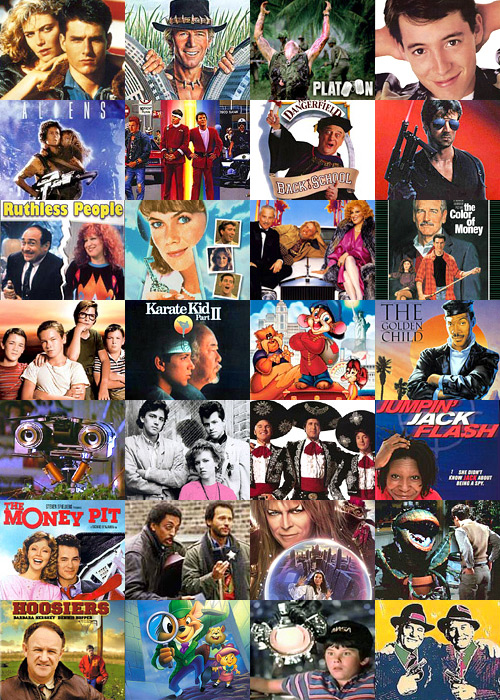 Top Gun
Starring: Tom Cruise, Kelly McGillis, Val Kilmer, Anthony Edwards, & Tom Skerritt
The macho students of an elite US Flying school for advanced fighter pilots compete to be best in the class, and one romances the teacher.

Platoon
Starring: Tom Berenger, Willem Dafoe, Charlie Sheen, & Forest Whitaker
A young recruit in Vietnam faces a moral crisis when confronted with the horrors of war and the duality of man.

The Karate Kid Part II
Starring: Ralph Macchio & Pat Morita
Daniel accompanies his mentor to Okinawa who is off to see his dying father and confront his old rival, while Daniel inadvertently makes an enemy of his own.

Star Trek IV: The Voyage Home
Starring: William Shatner, Leonard Nimoy, DeForest Kelley, James Doohan, Walter Koenig, George Takei, & Nichelle Nichols
To save Earth from an alien probe, Kirk and his crew go back in time to retrieve the only beings who can communicate with it, humpback whales.

Back to School
Starring: Rodney Dangerfield
To help his discouraged son get through college, a fun loving and obnoxious rich businessman decides to enter the school as a student himself.

Aliens
Starring: Sigourney Weaver
The only survivor of the Nostromo, Ripley is discovered in deep sleep half a century later by a salvage ship. When she is taken back to Earth, she learns that a human colony was founded on the same planet where the aliens were first found. After contact with the colony is lost, she finds herself sent back to the planet along with a team of warriors bent on destroying the alien menace forever, and saving any survivors — if any remain.

The Golden Child
Starring: Eddie Murphy
A private detective specializing in missing children is charged with the task of finding a special child that dark forces want to eliminate.

Ruthless People
Starring: Danny DeVito, Bette Midler, Judge Reinhold, & Helen Slater
A couple, cheated by a vile businessman, kidnap his wife in retaliation, without knowing that their enemy is delighted they did.

Ferris Bueller’s Day Off
Starring: Matthew Broderick, Alan Ruck, Mia Sara, Jeffrey Jones, & Jennifer Grey
A high school wise guy is determined to have a day off from school, despite of what the principal thinks of that.

Down and Out in Beverly Hills
Starring: Nick Nolte, Bette Midler, & Richard Dreyfuss
See what happens when a dirty bum meets the filthy rich.

The Color of Money
Starring: Paul Newman & Tom Cruise
A former pool player returns to the game and takes on a young protégé.

Stand by Me
Starring: Wil Wheaton, River Phoenix, Corey Feldman & Jerry O’Connell
After the death of a friend, a writer recounts a boyhood journey to find a body of a missing boy.

Cobra
Starring: Sylvester Stallone & Brigitte Nielsen
City cop is on the trail of a serial killer.

An American Tail
While emigrating to the United States, a young Russian mouse gets separated from his family and must relocate them while trying to survive in a new country.

Peggy Sue Got Married
Starring: Kathleen Turner & Nicolas Cage
Peggy Sue faints at a High school reunion. When she wakes up she finds herself in her own past, just before she finished school.

Short Circuit
Starring: Ally Sheedy, Steve Guttenberg, & Fisher Stevens
Number 5, one of a group of experimental military robots, undergoes a sudden transformation after being struck by lightning. He develops self-awareness, consciousness, and a fear of the reprogramming that awaits him back at the factory. With the help of a young woman, Number 5 tries to evade capture and convince his creator that he has truly become alive.

Pretty in Pink
Starring: Molly Ringwald, Jon Cryer, Andrew McCarthy, James Spader, & Annie Potts
Young Andie is one of the not-so-popular girls in high school. She usually hangs out with her friends Iona or Duckie. Duckie has always had a crush on her, but now she has met a new guy from school, Blane. He’s one of the rich and popular guys but can the two worlds meet?

Little Shop of Horrors
Starring: Rick Moranis
A nerdish florist finds his chance for success and romance with the help of a giant man-eating plant who demands to be fed.

Running Scared
Starring: Billy Crystal & Gregory Hines
They’ve got 30 days to clean up Chicago before they retire to Paradise . . . Losing their police car, their suspect and having their cover blown is a real bad start.

Labyrinth
Starring: David Bowie & Jennifer Connelly
Fifteen-year-old Sarah is left home alone to baby sit her little 1/2 brother Toby. But the baby keeps crying and Sarah, while telling him the story of her favorite book, the Labyrinth, to make him sleep, inadvertently conjures from a fantasy world the Goblin King who steals the child and brings him to his castle in the middle of a labyrinth. Sarah has to rescue him before midnight, or the baby will became a goblin.

Jumpin’ Jack Flash
Starring: Whoopie Goldberg
Terry works for a bank, and uses computers to communicate with clients all over the world. One day she gets a strange message from an unknown source. The message is coded. After decoding the message, Terry becomes embroiled in an espionage ring. People are killed, and Terry is chased. Throughout she remains in contact with this unknown person, who needs Terry to help save his life.

Hoosiers
Starring: Gene Hackman, Barbara Hershey, & Dennins Hopper
A coach with a checkered past and a local drunk train a small town high school basketball team to become a top contender for the championship.

The Great Mouse Detective
Basil, the rodent Sherlock Holmes, investigates the kidnapping of a toy-maker and uncovers its link to his archenemy, Professor Ratigan.

Tough Guys
Starring: Burt Lancaster & Kirk Douglas
Two elderly gangsters are released from prison only to find they have trouble fitting in as old men who still take no guff from anyone.

A Room with a View
Starring: Maggie Smith, Helena Bonham Carter, Denholm Elliott, & Julian Sands
When Lucy Honeychurch and chaperone Charlotte Bartlett find themselves in Florence with rooms without views, fellow guests Mr. Emerson and son George step in to remedy the situation. Meeting the Emersons could change Lucy’s life forever but, once back in England, how will her experiences in Tuscany affect her marriage plans?

Flight of the Navigator
Starring: Joey Cramer, Sarah Jessica Parker & Paul Reubens as the voice of Max
In 1978, a boy is moved 8 years into the future (1986) and has an adventure with the alien ship.