This is the second of a 4-part series that will look at those people most influential on movies in the 1980s. Click here to read Part I: John Hughes.

But how could I?

Mention 1980s movies to most people – 80s devotees or not – and a high percentage of them surely will think of the Brat Pack.

And that’s why I couldn’t pick just four people for my 1980s Movie Mt. Rushmore; I need eight people in this one slot alone. By now, you know the roll call: 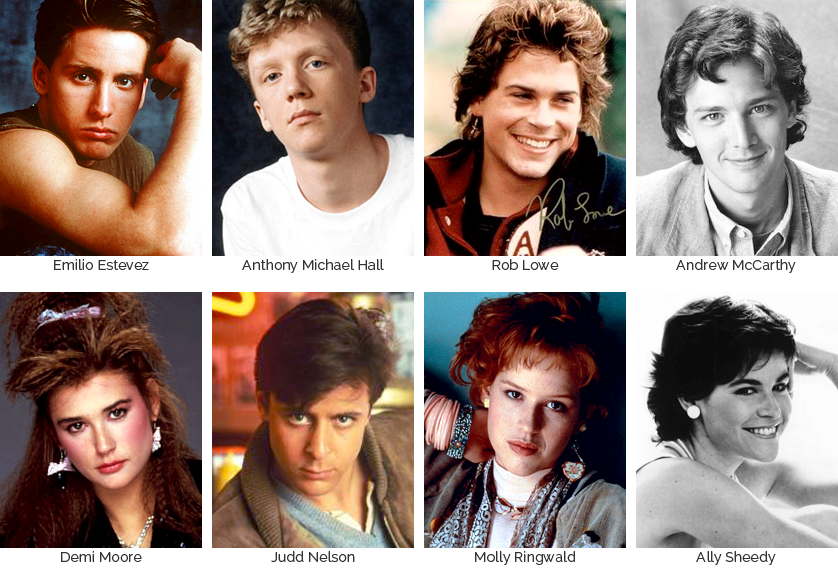 On their own, these eight actors starred in 47 movies in the 1980s. But it’s the other 11 movies – the other 11 movies that feature at least two Brat Pack members per movie, with 29 combined appearances in all – that have left the greatest mark on the ‘80s movie landscape. By now, you know that roll call, too:

And while it’s easy to fall back on the high level representation found in the Brat Pack’s signature film, The Breakfast Club (1985), the other characters these 11 played go beyond The Brain, The Athlete, The Basket Case, The Princess, and The Criminal; because we, as teens of the ‘80s, went beyond such labels.

We were the hormone-enraged kids aching to lose our virginity like McCarthy was in Class. We were the party girls who couldn’t shake our vices like Moore couldn’t in St. Elmo’s Fire. We were the socioeconomic outsiders romanced by the rich kids like Ringwald was in Pretty in Pink. The comparisons go on, and they hit home even closer when you consider some of the characters the Brat Pack played in their solo films.

What’s also great about these 11 films in particular is that if you expand the scope beyond the core eight, and include supporting players like Jon Cryer or Mare Winningham, you can find portrayals of other people we were, from Cryer’s lovesick best friend in Pretty in Pink to Winningham’s shy virgin in St. Elmo’s Fire.

Whenever we watched a Brat Pack movie, we always found someone we could relate to.

Eventually, as most things in Hollywood do, the Brat Pack’s run came to an end. The actors finally reached the point where they were too old to play teens, yet they were unable to shake the teen personas that everyone said they were too old play. They all parted ways and met with varying degrees of professional success.