This is the first of a 4-part series that will look at those people most influential on movies in the 1980s. 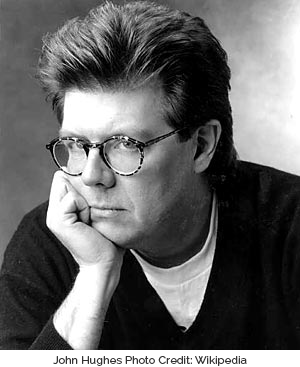 In the eight-year span between 1982 and 1989, John Hughes wrote, directed, and/or produced 16 movies. Of those, the titles of 14 are still easily recognizable today, even by casual fans of ‘80s films. And of those 14, at least three (The Breakfast Club; Ferris Bueller’s Day Off; Christmas Vacation) are culturally iconic.

In terms of box office clout, 10 of those 16 John Hughes films placed in the Top 20 for their respective years; five finished in the Top 10; and all 16 earned (after adjustments for inflation) a combined total in excess of $1 billion.

But those aren’t reasons why John Hughes had the impact he had on the generation of teens and young adults who flocked to see his movies in the 1980s; a generation of people who, along with their children, revisit those movies again and again 20-30 years later.

We loved John Hughes then, and we love him now, because he had an uncanny understanding of us. And because Hughes was a writer first (of those 16 films, he wrote all 16), he was able to craft characters that we could relate to then . . . and now.

His wheelhouse characters, of course, were teens. From the forgotten daughter of Sixteen Candles, to the perfectly representative quintet of The Breakfast Club, to the legend-in-his-own-time title character of Ferris Bueller’s Day Off, John Hughes masterfully created characters that we could relate to or, sometimes, that we wished we could be. And while it’s easy to hear Hughes’ name, make the immediate connection to his Brat Pack movies (Sixteen Candles; The Breakfast Club; Weird Science; Pretty in Pink), and stop there, we shouldn’t. Hughes also understood adults, and in two ways.

The first was his understanding of adults as adults. Consider his first big writing success, 1983’s Mr. Mom. While the script was comedic and some of the players were closer to caricature than character, Hughes understood how a bread-winning role-reversal would feel to the husband/father who lost his job and to the wife/mother who had to pick up the slack. He strikes a similar chord of familiarity with his portrayal of the protagonists in 1987’s Planes, Trains, & Automobiles.

Hughes’ second understanding of adults – and this, at least to me, was where he was smartest in his approach to characters – was how they were perceived by teens.

With the exception of the Harry Dean Stanton and Annie Potts characters in Pretty in Pink, and the John Kapelos character in The Breakfast Club, the primary adults in John Hughes’ films (involving teens or kids) are written as we would have perceived them to be in our own teen lives. Consider the power-and-vengeance-fueled principals of The Breakfast Club and Ferris Bueller’s Day Off; the jerk brother in Weird Science; the goofballs that are Vacation’s Griswolds; and the detached (at worst) or clueless (at best) parents in just about all of them. It was such a clever approach to character.

And because Hughes’ films were many, and because his characters were so wonderfully crafted, almost everyone has one character they can relate to. Mine is Duckie, as played by Jon Cryer, in Pretty in Pink.

On the surface, his character is quirky and from the “poor side of the tracks,” but his unrequited love for Molly Ringwald’s Andie makes me forget the socioeconomic surface of his character and focus on the love he feels and the heartbreak he suffers. Because, regardless of my own socioeconomic surface, I’ve been Duckie. I’ve pined, I’ve been rebuffed, and I’ve hurt.

And that shows you the real genius of John Hughes.