It was a new decade, and 1980 started off with a bang in the form of both natural and man-made disasters – including the eruption of Mount St. Helens and the assassination of John Lennon. Ronald Reagan is elected towards the end of the year, the beginning of his almost decade-long reign as the leader of the free world. Music was getting a shake up as well with a move away from the disco and singer-songwriter sounds of the 70s. New sounds hit the airwaves in the form of Blondie, Devo, and the Sugar Hill Gang with something new – rap. Millions of TV viewers want the answer to one question – Who Shot JR? This was the beginning of a new era – the 80s. 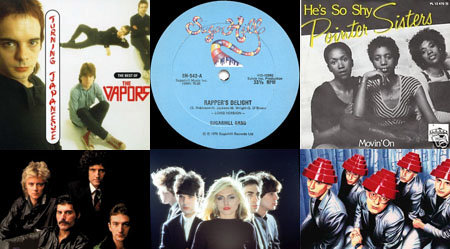 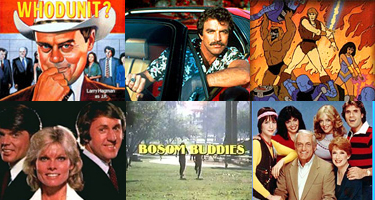 (1978-1991)
Millions of viewers tune into the U.S. TV soap opera Dallas to learn who shot lead character J.R. Ewing. The “Who shot J.R.?” event is a national obsession.

Thundarr the Barbarian [cartoon] (1980-1984)
In the year 1994, a comet hurtles between Earth and the moon. The moon is destroyed, and the Earth loses its ozone layer–causing the entire planet to be laid waste. Centuries later, Earth has become “a world of savagery, super-science, and sorcery,” inhabited by various evildoers, scavengers, and magicians. Thundarr, a mighty warrior (armed with his magic sword “The Sun Sword”) and his two companions, Princess Ariel, a beautiful sorceress the lion-like Ookla the Mok, do battle with evil forces of wizards and creatures as they travel across the world.

Too Close For Comfort (1980-1983)
Jackie and Sarah Rush are two grown sisters who live in half of a duplex. Their parents, Henry and Muriel, live in the other half. Though one might think this proximity may be fun, both sides often feel that it’s “too close for comfort.”

That’s Incredible (1980-1984)
A show that looked at the more unusual sides of nature, medicine and human endeavor. Segments ranged from the uplifting (young people overcoming severe handicaps to lead normal lives) to the unexplainable (a park ranger who had been hit by lightning over 7 times) to the simply stupid (a stuntman jumping a motorcycle over the spinning rotors of 3 helicopters). It also popularized the phrase, “Don’t try this at home.”

Bosom Buddies (1980-1982)
Starring: Tom Hanks & Peter Scolari
Two single men must disguise themselves as women to live in the one apartment they can afford. 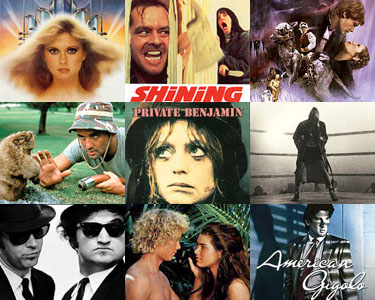 Stir Crazy
Starring: Richard Pryor & Gene Wilder
Skip and Harry are framed for a bank robbery and end up in a western prison. The two eastern boys are having difficulty adjusting to the new life until the warden finds that Skip has a natural talent for riding broncos with the inter-prison rodeo coming up.

Airplane!
Starring: Kareem Abdul-Jabbar, Lloyd Bridges, Peter Graves, Julie Hagerty, Robert Hays, Leslie Nielsen
Ex-Navy pilot Ted Striker has been nervous about flying ever since THAT incident during the war. He’s on a flight which would cause anyone concern: he seems to be the only sane person aboard. Of course, everything that could possibly go wrong on this flight will go wrong… what do you expect with a co-pilot who doesn’t realize he’s a basketball star, and an air traffic controller with a substance abuse.

Any Which Way You Can
Starring: Clint Eastwood
Philo takes part in a bare knuckle fight to make some more money than he can earn from his car repair business. He decides to retire from fighting, but when the Mafia come along and arrange another fight, he is pushed into it. A motorcycle gang and an orangutan called Clyde all add to the ‘fun’.

Private Benjamin
Starring: Goldie Hawn
A sheltered young high society woman joins the army on a whim and finds herself in a more difficult situation than she ever expected.

Blue Lagoon
Starring: Brook Shields & Christopher Atkins
Richard and Em are children when shipwrecked and marooned alone on a lush tropical island. By the time they are rescued, they have learned a great deal about life and are raising a child of their own.

The Blues Brothers
Starring: Jonh Belushi & Dan Aykroyd
Jake Blues, just out from prison, puts together his old band to save the Catholic home where he and brother Elwood were raised.

Urban Cowboy
Starring: John Travolta
Bud is a young man from the country who learns about life and love in a Houston bar.

The Shining
Starring: Jack Nicholson
A family heads to an isolated hotel for the winter where an evil and spiritual presence influences the father into violence, while his psychic son sees horrific forebodings from the past and of the future.

Friday the 13th
Many years after two summer camp councilors are killed at Camp Crystal Lake, the owner decides to reopen, which sparks a series of grisly murders.

Flash Gordon
A football player and his friends travel to the planet Mongo and find themselves fighting the tyrant, Ming the Merciless, to save Earth.

People Who Where Born