One site reader described the awesomeness of 1983 as follows.

1983, hands down. Michael Jackson and The Police dominate the Billboard charts, while “Murmur” is released and the Smiths put out their first single. Hair bands have not yet screwed up MTV for the rest of us. “National Lampoon’s Vacation” and “Valley Girl” are in the theaters, but George Lucas has hinted at the suck in our movie futures by giving us… Ewoks. Reagan and other Western political leaders are still wearing brown suits half the time. Everyone is legitimately worried about nuclear war. Good times. The only hole in the argument that 1983 is the height of the 80s would be that we’re still a year short of the debut of “Miami Vice.”

Mark Dursin explains why 1983 was the BEST year for music. 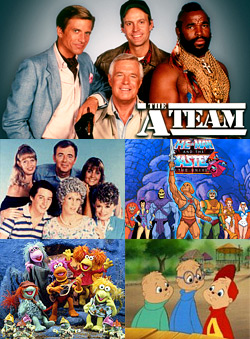 The A-Team
Starring: George Peppard, Dwight Schultz, Mr. T, & Dirk Benedict
Four Vietnam vets, framed for a crime they didn’t commit, help the innocent while on the run from the military.

He-Man and the Masters of the Universe [cartoon]
The most powerful man in the universe, He-Man, goes against the evil forces of Skeletor to save the planet Eternia and to protect the secrets of Castle Grayskull with the help of his friends, Man-At-Arms, Teela, Orko, and Battlecat.

Fraggle Rock [muppets]
Doc and his dog Sprocket have a hole in their wall, behind which live little furry creatures known as Fraggles in a place called Fraggle Rock. The Rock is also home to the Doozers (who are knee-high to a Fraggle) and the Gorgs (who are giants that think they rule the Rock). One gang of Fraggles (Gobo, Mokey, Wembley, Boober, and Red), under the guidance of the all-knowing Trash Heap (Marjorie), learn about each other and their neighbors and eventually befriend the Doozers, the Gorgs–and even Doc and Sprocket. Meanwhile, Gobo’s Uncle Matt explores Outer Space (our world) and sends postcards to his nephew about the Silly Creatures (that’s us).

Alvin & the Chipmunks [cartoon]
Three chipmunk brothers, Alvin, Simon, and Theodore, have been adopted by and are living with Dave (a human). Each show finds the boys getting into trouble and new and unusual situations.

Return of the Jedi
Starring: Mark Hamill, Harrison Ford, Carrie Fisher, & Billy Dee Williams
Darth Vader and the Empire are building a new, indestructible Death Star. Meanwhile, Han Solo has been imprisoned, and Luke Skywalker has sent R2D2 and C3PO to try and free him. Princess Leia – disguised as a bounty hunter – and Chewbacca go along as well. The final battle takes place on the moon of Endor, with its natural inhabitants, the Ewoks, lending a hand to the rebels. Will Darth Vader and the dark side overcome the rebels and take over the universe?

Terms of Endearment
Starring: Shirley MacLaine, Debra Winger, Jack Nicholson
Aurora and Emma are mother and daughter who march to different drummers. Beginning with Emma’s marriage, Aurora shows how difficult and loving she can be. The movie covers several years of their lives as each finds different reasons to go on living and find joy. Aurora’s interludes with Garrett Breedlove, retired astronaut and next door neighbor are quite striking. In the end, different people show their love in very different ways.

Flashdance
Starring: Jennifer Beals
A Pittsburgh woman with two jobs as a welder and an exotic dancer wants to get into ballet school.

WarGames
Starring: Matthew Broderick
A young computer whizz kid accidentally connects into a top secret super-computer which has complete control over the U.S. nuclear arsenal. It challenges him to a game between America and Russia, and he innocently starts the countdown to World War 3. Can he convince the computer he wanted to play a game and not the real thing?

Octopussy
Starring: Robert Moore, Maud Adams
A Faberge Egg found with a murdered British agent puts Bond on the trail that leads to a plot to kill thousands to weaken NATO defenses in Europe.

Sudden Impact
Starring: Clint Eastwood
A rape victim is exacting revenge on her aggressors in a small town outside San Francisco. Dirty Harry, on suspension for angering his superiors (again), is assigned to the case.

Mr. Mom
Starring: Michael Keaton, Teri Garr
Jack and Caroline are a couple making a decent living When Jack suddenly loses his job. They agree that he should stay at home and look after the house while Caroline works. It’s just that he’s never done it before, and really doesn’t have a clue.

Risky Business
Starring: Tom Cruise & Rebecca De Mornay
A Chicago teenager is looking for fun at home while his parents are away, but the situation quickly gets out of hand.

The Big Chill
Starring: Tom Berenger, Glenn Close, Jeff Goldblum, Kevin Kline
A group of seven former college friends gather for a weekend reunion at a posh South Carolina winter house after the funeral of one of their friends.

Scarface
Starring: Al Pacino as Tony Montana
In 1980 Miami, a determined Cuban immigrant takes over a drug empire while succumbing to greed.

The Outsiders
Starring: Matt Dillon, Ralph Macchio, Patrick Swayze, Rob Lowe, Emilo Estevez, Tom Cruise, C. Thomas Howell
The tension between two groups: The Greasers and The Socials “Socs” puts Ponyboy Curtis (Howell) and his best friend Johnny Cade (Macchio) in a bad spot. One night at the movies, Ponyboy and Johnny fall in love with Sherri “Cherry” Valance (Lane) and Marcia (Meyrink) once they get Dally Winston (Dillon), the toughest and meanest of the Greasers to stop attempting to “score” Cherry and Marcia. What Johnny and Ponyboy don’t know is that Cherry and Marcia are girls for the snobbish, popular, and rich group, the Socs. Once Johnny kills Bob Sheldon (Garrett), the toughest and meanest member of the Socs, this begins as the Socs demand a rumble against the Greasers.

Cujo
A friendly St. Bernard named “Cujo” contracts rabies and conducts a reign of terror on a small American town.

Valley Girl
Starring: Deborah Foreman, Nicolas Cage
Julie, a girl from the valley, meets Randy, a punk from the city. They are from different worlds and find love. Somehow they need to stay together in spite of her trendy, shallow friends.